In Iowa, only 5 percent of Biden supporters are younger than 45 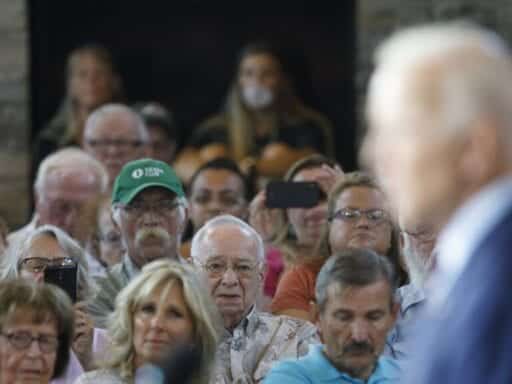 A new poll shows Biden in fourth behind Warren, Sanders and Buttigieg — with a much older base of support.

It’s beginning to look like there are very few Democrats under the age of 45 in Iowa interested in Joe Biden’s candidacy for president.

A new New York Times and Siena College poll found the former vice president in fourth behind Sens. Elizabeth Warren (D-MA), Bernie Sanders (I-VT), and South Bend, Indiana, Mayor Pete Buttigieg. Those four, all within the margin of error of each other, were the only Democratic candidates to register double digits in the poll.

Most striking in the survey, which polled 439 likely Democratic caucus-goers in the last week of October, was that Biden pulled only 2 percent of his support from 18- to 29-year-olds, and only 3 percent from 30- to 44-year-olds. His support came almost exclusively from voters older than 45. (The Iowa poll has a small sample size, though the poll was weighted for age, race, region, turnout, gender, and education.)

This age divide in the Democratic field isn’t only in Iowa, and it isn’t a new phenomenon. It’s reflective of a larger ideological fight that transcends race as a dividing line in the Democratic Party. Younger voters — both white and nonwhite — who are typically more progressive are backing candidates like Warren and Sanders, while older Americans are sticking with Biden.

In South Carolina, Sanders leads with Democratic voters ages 18-34, and Biden’s support increases with voters’ age, according to a mid-October Post and Courier poll. In New Hampshire, a late October poll from the University of New Hampshire told the same story: 6 percent of support was from voters ages 18-34; 11 percent was from 35- to 49-year-olds.

There is a silver lining for Biden. Older voters are more likely to vote than younger voters. That’s particularly relevant in the Iowa caucuses, where voter turnout is historically low (only 171,109 people participated in the 2016 Democratic caucuses). Caucusing is an all-night affair that’s easier to participate in if you don’t have school, work, or young kids to worry about. According to the entrance polls in 2016, voters older than 45 made up 64 percent of Democratic caucus-goers.

That said, Biden is no longer the clear frontrunner in Iowa. And this could be a warning sign for the candidate whose pitch to American voters is that he’s a unifying candidate who can beat Trump. Recent polls have put him either tied with Warren or trailing behind her.

Youth voter participation is growing nationwide, a trend that rang true in Iowa in the 2018 midterms. Turning out young voters in Iowa has also been the direct focus of some campaigns, like Sanders’s, that know their support lies among the younger, more progressive base.

There’s no question that turning out these voters will be more of a focus for the more progressive candidates. But this is a clear sign that Biden’s appeal hasn’t widened past his base: older people.

The problem with saying the Democratic primary is “rigged”
Why it’s so frustratingly difficult to know how bad the coronavirus outbreak will be
Trump claims Germany and Japan are “following us” in their coronavirus responses. No chance.
200,000 Americans are now confirmed dead from Covid-19
J.K. Rowling’s latest tweet seems like transphobic BS. Her fans are heartbroken.
4 young Indigenous people on what “home” looks like today