In its 37th season, Survivor is still capable of surprising even its hardcore fans 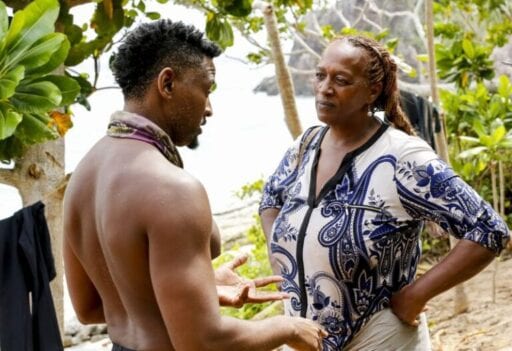 It seems improbable that Survivor can still shock and surprise in its 37th season — how much drama can you milk out of a single reality show, after all — but the mere fact that the CBS stalwart has been running so long makes it clear that something about its base formula is working. And in the three episodes of season 37 that have aired thus far, that base formula has already yielded multiple bombshell moments.

The gimmick this season — beyond the usual “strand a diverse group of people in a tropical setting, divide them into teams, and make them fend for themselves” construct — is “David vs. Goliath.” One of the two teams is comprised of underdogs, i.e. “Davids,” while the other is made up of overachievers seen to have every advantage, i.e. “Goliaths.” It’s a distinction that’s almost immediately visible — most of the Goliaths are clearly more athletic types, while most of the Davids are a scrawnier bunch; the Goliaths just look like they have a better chance of surviving in the wild.

For the first two weeks of the season, it seemed like those designations were actually going to have a significant effect on the game: The Goliaths won both challenges, regardless of whether the challenges required more brains or brawn. All of a sudden, the Davids were down two members, not only because their losses meant they were subject to Tribal Council, but because of an emergency, as David team member Pat Cusack had to be medically evacuated in the season premiere after injuring his back in a freak boat accident. (Host Jeff Probst took pity on the Davids following the incident, sparing them a Tribal Council for that episode.)

But the time to get complacent with expectations is over. Episode 2, “The Chicken Has Flown the Coop,” ended with an upset, as Jessica Peet was voted out of the David tribe over the expected “weak link” Lyrsa Torres after a last-minute round of votes. The twist put some cracks in the David tribe’s foundation — and then this week’s third episode, “I am Goliath Strong,” ended with the previously solid Goliath tribe in much the same position. Jeremy Crawford, one of the stronger players on the team, was sent home instead of Natalie Cole, who’d been the subject of elimination whispers since the beginning of the game.

It’s an understatement to say that the machinations of season 37 already feel particularly sharp (and more than a little petty). That has everything to do with Survivor playing to its known strengths of assembling dynamic casts and forcing contestants to strategize, both together and apart — and stirring up drama in the process. But what’s especially fascinating about the season so far is how it’s relying on the same old strengths that were present when the show debuted nearly two decades ago, while simultaneously showing off new ones that have emerged over its tenure.

Survivor has been on the air for too long for the people competing on it to not be fans. In the season 37 premiere, one of the show’s more famous longtime-viewers-turned-contestants — Mike White, who you may recognize as School of Rock’s Ned Schneebly — even professed his Survivor fanaticism in one of his testimonials to the camera. And the kind of strategizing that’s evolved out of that inevitability has altered the way the game is played.

In the first two episodes of this season, it seemed foretold that, were the Goliaths to ever be sent to Tribal Council, Natalie Cole would be the one going home. Directly or indirectly, she’d managed to antagonize most of her teammates, and there’d already been conversations brewing about voting her out. When she failed to complete this week’s puzzle challenge in time — marking the Goliath tribe’s first loss — her exit seemed nearly guaranteed.

That the votes abruptly turned and Crawford was ousted instead speaks to Survivor’s reach — the members of the Goliath tribe were thinking not just in terms of personal relationships, but in terms of what would make the game easier to win for themselves. Cole came across as dead weight for the team, but she didn’t seem like a threat. Crawford, in contrast, appeared to have a shot at ultimately winning the game. He was strong enough to win physical challenges, and smart enough to try to stack the team deck in his favor. So he had to go.

But what was even more shocking than Crawford being voted out was that the vote against him (apart from Cole’s, of course) was unanimous. The idea that a strong competitor like Crawford had to be eliminated in order to clear a path for the rest of the tribe seemed to have taken root, and even White, who had formed something of an alliance with Crawford over the course of the past two episodes, voted for Crawford to be sent home in order not to rock the boat.

If nothing else, White’s vote emphasizes on how people are now playing the game. From the season’s first episode, in which he snuck away from the camp to find an immunity idol (a move that’s since been copied by other players, from both tribes), he’s been playing with long-term strategy in mind. That approach is something he clearly developed as a fan of the show, over the course of 36 prior seasons’ worth of study.

If there’s another ingredient in just how great season 37 has been so far, it’s that the casting department struck gold when choosing contestants. They reflect the usual amount of reality TV engineering, sure, but what’s genius is the way that almost every member of the cast seems to fit a certain niche — from the jock to the nerd. By focusing on recruiting contestants who can build and inform an overarching story rather than just being cutthroat competitors, Survivor has added an extra emotional hook in a show that easily could have gone stale after so many years.

It still strikes me as a minor miracle, for instance, that White is on the show at all. The fact that he’s a (relatively) public figure makes it feel like you’re seeing someone you know on your TV screen, maybe a friend of a friend of a friend. He’s also just a delight to watch; that his sheer devotion to Survivor is part of what got him cast is endearing (in an interview with Indiewire, he said that he’d hounded the show’s producers for years — though he had to go through the same casting process as everybody else), as is the fact that he seems to be a Goliath odd duck.

In this season’s first episode, White was somewhat amazed by the other members of his team, e.g. people who look to be in tip-top shape and are more conventionally attractive, whereas he described himself as “not one of the beautiful people.” It’s a kind of self-deprecation that has persisted throughout subsequent episodes as well.

Then there’s the other Wikipedia-able member of this season’s cast, professional wrestler and White’s fellow Goliath teammate John Hennigan, who refers to himself as the “Mayor of Slamtown.” Like White, he comes from an entertainment background and thereby knows how to embody and sell a certain persona. He has said that Survivor is his chance to play as himself as not as his wrestling alter ego, even if his statements that he is using the game to develop “old-school human skills,” like “conversations and laughing with friends” — made in apparent earnesty during a testimonial aside — seem like Slamtown sayings more than anything else.

They’re real people, but they slot into archetypes that lend Survivor a more narrative shape, especially against the more familiar backdrop of in-fighting and backstabbing, alliance-making and showmancing. (If you told me that the David team’s Christian Hubicki, who White referred to as “Big Bang Theory” in the season premiere, had been made up and scripted to fit the nerd archetype, I would believe it. Hubicki really is that nerdy, and it’s great.) The effect has brought plenty of intrigue to a 37-season-old formula. After all this time, Survivor is still making waves by showcasing all of its strengths, both new and old.