In London, hundreds of thousands demand another chance to vote on Brexit 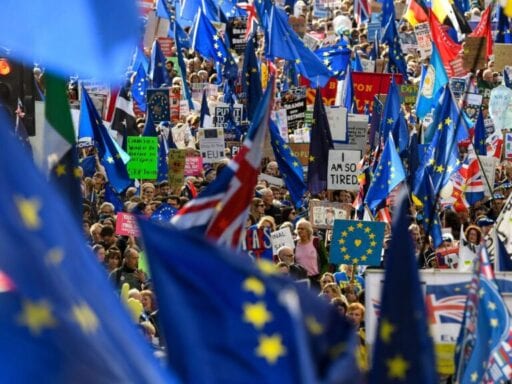 Share
Loading...
Demonstrators march in support of a “People’s Vote,” a second referendum on Brexit on October 19, 2019. | Niklas Halle’n/AFP/Getty Images

A massive protest was held as lawmakers voted to ask the EU for a Brexit delay.

As Parliament met in London Saturday morning and voted to force a Brexit delay, hundreds of thousands of anti-Brexit protesters marched in the city’s streets demanding citizens be given a second chance at deciding whether to leave the European Union.

The massive crowds moved through the city towards Parliament in a festive and defiant demonstration of frustration with the country’s impending break with the EU, the New York Times reported. Organizers of the effort told the Times they expected more than a million demonstrators, which would make it one of the largest protests Britain has ever had.

The demonstrators were joined by a host of current and former politicians, as well as celebrities, who addressed the crowd. In his speech, former Conservative deputy prime minister Michael Heseltine said Brexit represents “a creeping paralysis, where yesterday’s nostalgia distorts tomorrow’s opportunities.”

“The very existence of our United Kingdom now hangs by a thread,” he said. “Brexit will not bring us together. It is the wedge that will drive us apart.”

The protestors gathered to call for a second referendum on Brexit; the first referendum in 2016 saw the United Kingdom voting to leave the European Union. That popular vote has set off years of debate over how to exit the union, and whether citizens ought to reconsider staying in.

Proponents of the separation argued it would bring more financial freedom and allow for more control over the nation’s borders. Opponents have argued Brexit will create economic instability, including possible food shortages and skyrocketing import costs.

.@campbellclaret borrowed an Independent microphone for the day and has been asking protesters at the #PeoplesVoteMarch why they’re fighting for a #FinalSay vote pic.twitter.com/RmD0tU5OKX

While that’s a possibility, British lawmakers are dealing with a short-term political crisis first. On Saturday, Parliament approved a measure that will force Prime Minister Boris Johnson to ask the EU for a delay on the current October 31 deadline to leave. He’s ardently said he won’t, and he has until 11 pm local time Saturday to formally ask European leaders for that extension. Even if Johnson complies with the measure, there still could be no extension: All 27 EU leaders have to approve any change to the exit deadline, and it isn’t clear that will happen.

Also at issue is the fact Johnson and the EU have at last reached a mutually agreeable deal on how the UK will leave, but the prime minister has not yet convinced lawmakers to support his plan, something that has in the years past been a lot easier said than done.

That’s why protesters outside Parliament cheered the vote to delay the official exit; a delay places some safeguards on Johnson’s exit plan, and could give the kingdom time to implement a second vote on whether to leave or remain.

Advocates for another referendum argue that voters didn’t fully understand the consequences of leaving the EU when they voted to do so in 2016. For example, proponents of leaving said it would strengthen the country’s economic prowess, but those in favor of remaining argue there is growing evidence to suggest the UK will be a lesser economic force outside of the EU.

Now that there have been years of public discourse around Brexit, those in favor of a second referendum argue the temperature of the kingdom must be taken a second time to ensure the majority of voters still want to strike off on their own.

“In a democracy there is a fundamental question: Do we have the right to change our minds?” said Hilary Benn, a member of Parliament’s Labour party, said to the demonstrators, the Independent reported. “I know that a confirmatory referendum will put it back to the people and we will get a decision.”

Opponents of another referendum, including Johnson and former Prime Minister Theresa May, have argued the public already voted on it in 2016 and that it would be “undemocratic” to stage another vote, Vox’s Jen Kirby has reported.

It’s estimated it would take at least 22 weeks to hold another vote on Brexit, which has been one problem for proponents pushing the option. But if the EU approves another extension past the current October 31 exit deadline, needing 22 weeks may no longer be a problem.

Even in the unlikely event another referendum is held, what question would be posed to voters is another issue facing proponents of a second vote, Kirby reported:

Should it be a clean 2016 do-over? A Brexit deal versus Remain? Should there be multiple options, including the offer of a “no-deal Brexit”? Or will this risk splitting the vote, offering an outcome that no one really wants?

Parliament would have to vote to allow another referendum, and it’s not clear whether there’s enough support to make it happen. In April, a push to allow another public vote lost by 12 votes. It’s also unclear whether a new vote, if it did happen, would yield different results. Some polls have shown a new vote would lead to the UK remaining in the EU, and some say the opposite. All pollsters agree, however, that a second referendum — like the first — would be close.

With the prime minister’s opposition to such a move, questions about its support in Parliament, and even the issue of time, there are many barriers to a second referendum, despite so many demonstrators speaking out for one Saturday. But the current most pressing Brexit question — whether the UK will be able to extend its exit deadline past October 31 — may soon be answered.

Joe Biden explains why he flipped on the Hyde Amendment
Democrats’ new bet: boring can win
A class on how to deal with trauma — taught by a cop who killed a black man
This animation shows what would happen if leap years didn’t exist
Cory Booker was asked about veganism at the debate. He missed an opportunity.
Here’s how Facebook plans to make decisions about controversial content it’s taken down