In many states, the end of Roe v. Wade is already here 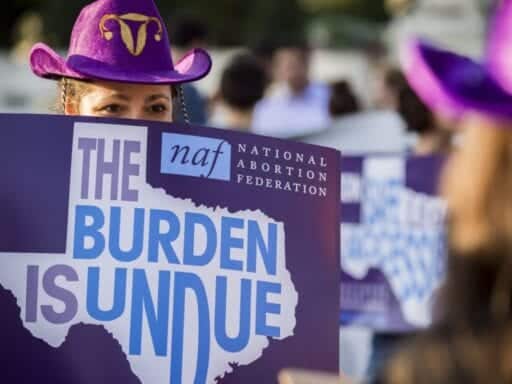 For abortion rights watchers, the announcement that Justice Anthony Kennedy plans to retire from the Supreme Court at the end of July came as a wallop. The news was a realization that Roe v. Wade, the nation’s landmark 1973 abortion rights decision, is increasingly fragile.

Over his three-decade tenure, Kennedy has been the swing vote keeping federal abortion rights mostly intact. And if the right case makes it to the Supreme Court, the Trump-nominated replacement to Kennedy and four other dependably conservative justices could overturn Roe v. Wade and jeopardize legal abortions in the United States.

Yet in many regions across the country, the end of Roe is essentially already here.

The rollback of abortion access in some states has been taking place for the better half of the last decade. After the 2010 elections ushered in a wave of conservative governors and state lawmakers, more than 400 state laws have been passed to restrict abortion access in some way, according to Rachel Sussman, Planned Parenthood’s national director of state policy and advocacy.

If Roe v. Wade is overturned, states can individually decide whether abortion will remain legal and how accessible it will be. While services in blue states like California and New York will probably remain intact, they most likely will not in states like Mississippi where abortion is already restricted. (In Mississippi, abortion is illegal after 15 weeks of a pregnancy, and only one remaining clinic offers the procedure.)

And it’s not just Mississippi. Twenty-one states, including North Dakota, Georgia, and Oklahoma, adhere to a 20-week ban. In some states, burdensome requirements for abortions mean extended wait periods for women seeking the procedure. Legal limitations like extended waiting periods have been placed on medication-based abortions. Certain states restrict private insurers from covering abortion, while other states require women to undergo counseling before having an abortion.

Access to clinics has been on the decline for years

Documentaries and news articles have long chronicled the diminishing number of abortion clinics in the South and West. Six states — West Virginia, North Dakota, South Dakota, Mississippi, Wyoming, and Kentucky — each have only a single remaining abortion clinic. And Kentucky could very well become the first state without any abortion clinic at all. The state’s conservative governor has lodged a federal lawsuit against EMW Women’s Surgical Center, Kentucky’s lone clinic because its doctors do not have admitting privileges at local hospitals should a patient require a transfer.

Many of the restrictions on abortion are, in fact, waged against clinics and providers. Eleven states require abortion providers to have practitioners with admitting privileges, meaning they must have ties to a hospital that patients can go to in an emergency. While the requirement seems commonsense, doctors often find it difficult to maintain the minimum number of admitted patients or they live too far from the hospital to qualify.

Some states impose regulations on an abortion clinic’s distance from a hospital, the size of procedure rooms, and even the width of corridors inside. Strict requirements like these would have severely cut down abortion access across Texas if it weren’t for the 5-3 Supreme Court decision of 2016 in Whole Women’s Health v. Hellerstedt, which deemed such regulations an undue burden on clinics and women seeking abortions.

Even states with multiple clinics leave some populations underserved. The Lancet published a study last year examining how far women of reproductive age needed to travel to find the nearest abortion clinic. Across the US, the median distance a woman has to travel to reach an abortion clinic is 11 miles, but that’s generally because abortion clinics (and people) are concentrated in urban areas. Still, as Vox’s Anna North reported last year, women in large swaths of the United States are sometimes forced to travel hundreds of miles for an abortion.

Additionally, 43 states prohibit abortion after a certain number of weeks into a pregnancy. With each year comes even tighter timelines. During their past legislative sessions, Mississippi and Louisiana each banned abortion after 15 weeks. (That’s still several weeks before a fetus would be considered viable if born prematurely, according to a 2015 study published in the New England Journal of Medicine.) While Mississippi’s law was immediately challenged in court, it lines up with Gov. Phil Bryant’s 2014 declaration that he would work “to end abortion” in his state. In Louisiana, performing an abortion for someone after 15 weeks of her pregnancy comes with a prison sentence of as much as two years. Kentucky, pending a legal challenge, may limit the types of abortion procedures available to women who are more than 11 weeks pregnant. Iowa’s governor signed a bill banning abortions once a fetal heartbeat is detected, which can be as early as six weeks into a pregnancy.

Dr. Jamila Perritt, a fellow with Physicians for Reproductive Health that advocates for contraception and abortion rights, outlined for NPR earlier this year how such a short window of time creates a barrier for many women who seek abortions.

”The likelihood that an individual can miss her period, get a pregnancy test, then make an appointment to see an abortion provider, take time off of work if she’s working, find child care for her other children, get in to get her abortion and have all of that done prior to a six-week time period is absolutely unrealistic and unreasonable,” Perritt said.

Abortion restrictions like these, Sussman reiterated, have a particularly high impact on people of color, undocumented people, and low-income earners, especially those with hourly wage jobs. That’s all the more jarring if you consider that, according to the Brookings Institution, low-income women are “more than five times as likely than affluent women to experience an unintended pregnancy.”

But is Roe really in jeopardy?

On the campaign trail, Donald Trump vowed he would nominate anti-abortion judges and that Roe would “automatically” be overturned. With Justice Kennedy’s retirement, Trump will likely uphold at least one part of his campaign promise.

There are nearly a dozen cases in federal courts right now that could, if brought before the Supreme Court, potentially upend the precedent established by Roe 45 years ago, according to Planned Parenthood. Even if Roe isn’t overturned outright, replacing Kennedy will affect abortion rights, “not so much because it will bring about the immediate reversal of Roe v. Wade but because it makes it more likely that the Supreme Court will give the states more room to decide what regulatory constraints on abortion are valid,” Carol Sanger, a Columbia law professor, told Vox’s Li Zhou this week.

Nonetheless, 67 percent of the US public does not want the case overturned, according to a Kaiser Family Foundation poll conducted before Kennedy’s announcement. Among women of reproductive age, the figure is 74 percent.

Despite public opinion, states across the country have been paring back abortion access or preparing for the overturning of Roe. According to the Guttmacher Institute, 17 states have laws on the books that would rescind any remaining abortion rights if the decision is overturned. In other states with majority-Republican legislatures and conservative governors, similar restrictive laws could come quickly.

Nonetheless, Sussman said, “there are states out there that have declared that they’ll fight tooth and nail to ensure that access to abortion in their state is not only protected but that they’ll defend it. There are a lot of states working proactively — they’re setting up their states to codify Roe’s protections. This won’t be a one-sided story.”