In Sharp Objects’ “Closer,” women’s stories don’t belong to them 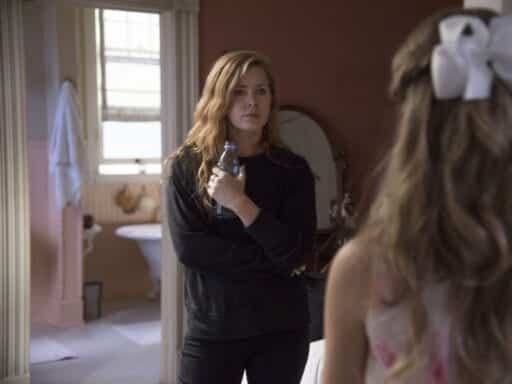 Camille’s article about the murders is finally being read by the citizens of Wind Gap. They aren’t happy.

Sharp Objects’ fifth episode, “Closer,” followed the plot slowdown of “Ripe” by revving its engine and dropping some major hints about the killer.

It makes sense that this installment feels like the show is shrugging off its lull — we’re now more than halfway through its eight-episode season. And “Closer” is possibly the soapiest chapter yet.

Every character, it seems, is ready to have sex with someone, kill someone, or both.

At the center of Calhoun Day is a play about Millie Calhoun, a woman who was raped by Union soldiers but still refused to give up her husband’s whereabouts and betray him. Amma (Eliza Scanlen) is playing that character with a too-enthusiastic vigor, considering this is the same role that spurred her creepy, sexual interaction with her teacher in “Ripe.” It’s not just Amma who relishes the character; the townspeople do too — whether or not they realize that part of the fantasy is sexual.

“It’s how she resists that everyone in this town just loves,” Camille (Amy Adams) tells Detective Willis (Chris Messina). “They tied her to a tree. They did horrible things to her. Violations. But Millie never said a word.”

While the Calhoun Day festivities are happening, Camille’s story about the murders is finally being read by the citizens of Wind Gap. They aren’t happy. The Veranda Women led by Jackie O’Neill can’t stop gossiping about Adora’s girls. The town’s mean girls want to invite Camille over for a girls’ night and talk about the murders (she declines). And people can’t stop gossiping about how they think Camille is sleeping with Willis to get more information.

But if you ask me, Camille doesn’t need to be talking to Willis about the murders. It seems like Sharp Objects, especially in this episode, is signaling that Camille is closer to the murderer than Willis’s investigation is — Camille just doesn’t know it yet.

Why Amma should be the biggest suspect, but isn’t

Throughout the season, the townspeople and sheriff of Wind Gap have just assumed that the person who killed Natalie and Ann is a man. In episode three, we saw how no one in Wind Gap can seem to fathom the notion of a dangerous woman.

That echoes again in “Closer” when Willis and Bob Nash (Will Chase) have a confrontation at Calhoun Day. They talk about finding Nash’s daughter’s killer and, without thinking, automatically assume it’s a man.

“You gonna strangle him and rip out his teeth?” Nash asks in response.

The rest of the townspeople, who have now read Camille’s article, obviously believe the killer is a man too. But they think it’s either Nash or John Keene. Camille never specified that those two men are suspects in the murders. But everyone, including people in her own family, seems to assume that the police taking a closer look in town means they’re looking at Nash and Keene.

What people are missing is the sociopath in a babydoll dress standing right in front of them. And in “Closer,” she displays flashes of real menace and manipulation.

In one of the opening scenes, Amma shares an intimate conversation with Camille. She says something that angers Adora, to which the latter responds by skittering out of the room in anger. Then Amma pulls out a phone from underneath her top and tells Camille that she has a secret phone their mother doesn’t know about. Camille uses the opportunity to ask Amma about her friendships with Natalie and Ann.

“I don’t like to think about them. It scares me,” Amma tells her. “I feel bad because we weren’t friends anymore when it happened.”

I doubt we’re supposed to fully believe Amma at this point. After all, she does like to hang out at the slaughterhouse; I’d assume she would have at least a slight fascination with these murders.

Then Amma continues to talk wistfully about building forts, and how she didn’t get to do that with her ex-best friends who are now also ex-alive.

That’s when she flips a switch.

Hurt that she didn’t get to see Camille’s article before it was published, Amma finds retribution on a shopping excursion with Camille and Adora. While Camille waits in a dressing room to try on clothes, her original clothes disappear (Amma is the culprit), and she’s left in her underwear while Adora and Amma wait outside. She doesn’t want anyone to see her scars, has a complete meltdown, and yells at both Amma and Adora. Her sister and her mother see her scars.

Amma apologizes, and then uses the moment to get closer to Camille. She asks if the cutting hurts. She says she knows a girl who cuts too. She then gives Camille a dress to wear to Calhoun Day, and tells Camille that they’re really two kindred spirits, stuck in Wind Gap — that Camille can’t leave her.

“If I can [survive in Wind Gap], you can,” Amma says, begging her to stay.

Amma strikes me as someone who is very good at being emotionally manipulative. She knows how to terrorize someone and play them for fools at the same time. It wouldn’t surprise me in the least if she did the same to her two ex-best friends — and possibly killed them too.

Beneath the costumes and Confederate role play of Calhoun Day, Wind Gap’s citizens are all upset with Camille’s story about the murders. Adora is mad because she basically gets upset when Camille breathes, let alone writes a newspaper article. Chief Vickery (Matt Craven) is angry because he thinks Willis is spilling secrets. The Wind Gap mean girls (Camille’s high school peers) and Veranda Women are upset because they seem to want to offer their insight, but don’t feel like they were given the chance to.

While the town is reeling over Camille’s account of what happened, it’s also ironically celebrating another story: the story of Millie Calhoun, the heroine who endured rape and abuse at the hands of Union soldiers.

As Camille points out, it’s a completely creepy fascination. Millie isn’t given any agency in her own story, other than to serve the purpose of glorifying the South. And Camille mentions that Millie is also a child bride who originally came from a Union family, a detail that isn’t explored.

Camille isn’t the only one who feels weird about celebrating Calhoun Day the way Wind Gap does.

“[Adora] said it’s that way only because it’s written by men,” Amma says.

Wind Gap’s animosity over Camille’s account of the murder investigation juxtaposed with the town’s adoration of the Calhoun rape fantasy is striking. Both are telling the story of girls or young women who were victims of heinous crimes. The one striving for truth was written by a woman. The other that glorifies this rape was written by men.

We know which one Wind Gap likes better, and the symbolism of how the town values the words of its women is notable. If Camille or a woman had written the tale of Millie Calhoun, it probably would have been a lot different. I’d imagine Millie would have more agency, for one thing.

With “Closer,” Sharp Objects wants to show, again, that Wind Gap underestimates its women. They’re used as figureheads to feel pride, they’re victims to feel pity for, they’re angels to be avenged, but, as the show emphasizes, they don’t have autonomy even in their own stories. That’s the difference between myth and reality, and between the women of Wind Gap and how society sees them.

The deadly mix of Covid-19, air pollution, and inequality, explained
Trump’s latest Fox Business interview was an elaborate distraction campaign
We need to talk about what school closures mean for kids with disabilities
Noam Chomsky’s Green New Deal
Trump’s purge of inspectors general, explained
The difference between the Grammys’ Song, Album, and Record of the Year categories, explained