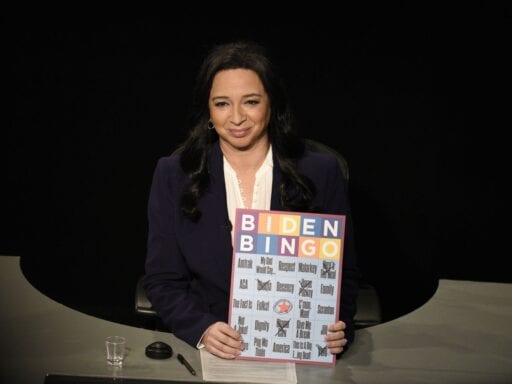 “Tonight we have a mute button, because it was either that or tranquilizer darts,” said Maya Rudolph as Kristen Welker.

Saturday Night Live parodied the final presidential debate during its opening sketch on Saturday, depicting President Donald Trump as clueless and callous about the third wave of the coronavirus pandemic, and Democratic presidential nominee Joe Biden as comically old-fashioned and goofy about everything.

Maya Rudolph, playing moderator and NBC journalist Kristen Welker, began the debate by reminding the participants that she had a mute button — a feature that was added to the actual final debate because of Trump’s relentless interruptions during the first debate in September.

“Tonight we have a mute button, because it was either that or tranquilizer darts — and the president has a very high tolerance for those after his Covid treatment,” Rudolph’s Welker declared.

As the debate began, Trump, played by Alec Baldwin, immediately downplayed the virus as worthy of the public’s concern.

“Coronavirus — boring, right? We’re doing terrific,” Baldwin said. “We’re rounding the corner, in fact we’ve rounded so many corners we’ve gone all the way around the block that we’re back where we started in March.”

Biden, played by Jim Carrey, retorted, “C’mon man, we’re in the middle of a third wave! Where I come from if a girl gave you a third wave, you were practically married.”

Later on, Baldwin’s Trump promised that a coronavirus vaccine would be distributed by the military in spectacular fashion: “The army will come and shoot it with a cannon into your face.”

He then rambled about his own experience with Covid-19.

“Look, I had it, it was very mean to me, but I beat it, and now the doctors say I can never die,” Baldwin said. “And this virus said to me, ‘Sir, sir, I have to leave your body.’ Now the virus was crying, very sad. It didn’t want to leave my body. And the point is we’re all learning to live with it.”

Overall, Biden’s debate performance was characterized as “a little feisty,” and SNL satirized this by having Rudolph’s Welker halt the proceedings to observe, “Looks like Mr. Biden is so mad he’s Eastwooding it a little bit,” in a reference to actor and director Clint Eastwood.

“That’s right, now I believe the little lady asked you about a plan, why don’t you enlighten us, punk?” Carrey said.

Rudy Giuliani, played by Kate McKinnon, also made a brief appearance during the debate.

“Get ready for this truth bomb!” McKinnon’s Giuliani shouted. “Your son Hunter got $3 million from Moscow and his friend Tony Babdooey has emails right there on the wet laptop from hell! And our eyewitness saw everything and he is blind!”

The statement is a reference to a questionable story published by the New York Post alleging the discovery of inappropriate emails by Hunter Biden on a laptop dropped off at a repair shop. As Vox’s Andrew Prokop recently explained, “questions have been raised about whether that story is accurate and whether all the information allegedly on the laptop is authentic.”

In making his closing statement, Carrey’s Biden presented himself as the safe option by likening himself to a reliable car.

“Look, everybody, you know who he is and you know who I am,” he said. “I’m good old Joe. I’m reliable as a rock. I’ve got a five-star safety rating and I’m ranked best midsize in my class by J.D. Power and Associates. I don’t have a gold toilet seat. I have a soft, spongy one that hisses whenever I park my keister.”

“There’s only two things I do,” he added. “I kick ass and I take trains. And I don’t see any trains in sight. And that ladies in gentlemen, is no malarkey.”