In the dazzling Harrow the Ninth, the lesbian necromancers are back in space 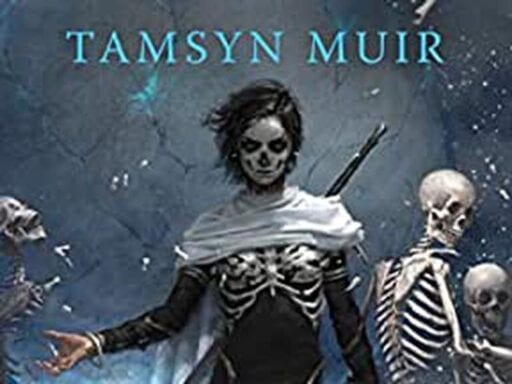 Tamsyn Muir’s sequel to Gideon the Ninth threatens to break under the weight of its baroque mythology. It never quite does.

I couldn’t tell that there was anything wrong with Tamsyn Muir’s Harrow the Ninth, the sequel to last year’s Gideon the Ninth, until I sat down to summarize it. Confidently I poised my fingers over the keyboard, certain that this novel that is so exceedingly lovable, this novel that I had already read three times, with its necromantic saints and showy metafictional riffs and luridly gothic family saga, would be easy to write about.

And then it occurred to me: Did I have any idea what happened at the end? Not in a cliffhanger way, more in like a … basic plot mechanics way?

Reader: I do not. It is utterly opaque to me.

Regardless, I loved Harrow the Ninth, loved it with my whole heart: its lush and velvety sentences, its wicked sense of humor, its sprawling cosmic world-building, the tragic love story at the center of it all. And if you are the kind of person who loved Gideon the Ninth (lesbian necromancers in space! what’s not to like?), you’ll love Harrow too.

If, however, you did not care for Gideon and, particularly, for the density of its mythology, or you feel like perhaps skipping volume one and diving straight into volume two, I feel compelled to tell you for the love of god not to do it. Harrow builds on the mythology Gideon established in increasingly baroque directions, and even though I am fully on board the Gideon boat, I still found this new volume rough sailing at times. If you did not already buy in on the basis of book one, book two is unlikely to sell this world for you.

What remains to be said is for true believers only. Let’s dive in.

Harrow the Ninth has a case of middle-volume-itis. That said, it’s a pretty fantastic middle volume.

Gideon the Ninth left off with our heroine Gideon dead. Gideon sacrificed herself so that her true love Harrow could absorb Gideon’s soul and become a Lyctor, one of the immensely powerful and un-aging necromantic saints who serve the Emperor-God of this system of necromantic cults.

But as Harrow the Ninth picks up, things aren’t quite as Gideon intended.

Something has gone wrong with Harrow’s transition, and she doesn’t have access to her full powers as a Lyctor. Unlike her fellow Lyctors, she doesn’t heal instantly; none of Gideon’s knowledge of fencing and fighting remains in her body as it was supposed to. Her fellows are fairly certain that Harrow will be killed soon, and Harrow numbly accepts her fate, although she still strives to serve the Emperor whom she has spent her life worshipping as God. (The Emperor, we learn in this book, is a guy named John who makes bad pop culture jokes no one else can understand, because all of his references are ten thousand years old. Harrow’s capacity for reverence is at times strained.)

Most concerning, Harrow no longer seems to have any memory of Gideon.

For most of Harrow the Ninth, we alternate between perspectives. Half the time, we follow Harrow’s Lyctor training from a tight second-person point of view, and while second person is always tricky, Muir pulls it off nicely here. In large part, it works because Harrow is so traumatized: She’s dissociating, and she can’t narrate in the first person because she can’t bear to address herself so intimately. But the perspective also works because it allows Muir to play with pronouns. The first time she switched out of “you” and into “I,” I sat straight up and clapped my hands with glee.

In the other half of the book, in a tight third-person perspective, we see what at first appears to be the events of Gideon the Ninth, retold from Harrow’s point of view. But this time, Harrow’s cavalier isn’t Gideon. And events rapidly fall away from their familiar book-one track.

As a point-of-view character, Harrow is chillier and more closed off than the brash and easy-to-love Gideon. Part of the pleasure of Gideon the Ninth was the contrast between Muir’s wildly over-the-top gothic world-building (everything in this universe is decorated with bones) and Gideon’s charming jock basic-ness, which saw her greeting every new cosmic horror with a shrug and a dirty joke. But Harrow loves all the leering skeletons everywhere with a deep and religious sincerity, and she can’t puncture the atmosphere the way Gideon could.

But although Harrow can be very funny, this book is in the end a sadder story than the warmhearted Gideon the Ninth was. Harrow the Ninth is a book about grief and guilt, about committing a terrible sin and doing everything possible to forget it.

It is also, plot-wise, even shaggier than its predecessor. Harrow the Ninth is the second book in a planned trilogy (the third volume, Alecto the Ninth, is expected next year), and it suffers from a case of middle-volume-itis. There is a lot of establishment of extremely complex mythology here, a lot of moving very intricate pieces into place so that they can, presumably, pay off in volume three. There are plenty of fun set pieces in the midst of all this moving stuff around — Harrow develops a viciously intricate murder plot as only she can, and the Lyctor threesome actually ends up explicating some deeply moving character dynamics and setting up a plot twist — but it is A Lot.

And as the book reaches its close, there are so many vast torrents of exposition it feels as though you could drown in them. Beautifully written, character-inflected exposition, to be sure, but exposition nonetheless. And truly, I could not tell you what is happening at the end of this book for the life of me.

Still, as bewildered as I am by Harrow the Ninth at times, I always enjoy being bewildered by Muir. And when Harrow’s grief reaches its crescendo, and she at last begins to mourn Gideon in earnest, well, I’d be lying if I told you that my eyes were dry.

Harrow the Ninth is delightfully, beautifully weird, a book even odder than its predecessor but just as bewitching. Because I am a lady, I will not make a dirty joke here about Harrow being a bone witch and bewitching bones. But please rest assured that Muir would and Muir did.

We know ocean plastic is a problem. We can’t fix it until we answer these 5 questions.
In Brittany Runs a Marathon, a woman takes control of her life. Jillian Bell says it was terrifying.
Vox Sentences: What a bat tells us about Ebola
7 potentially deadly errors the US is making in its coronavirus response
Ebola showed up in a war zone. It’s not going well.
Lost is still groundbreaking TV