In the exquisite drama South Mountain, a woman’s broken dreams make space for new ones 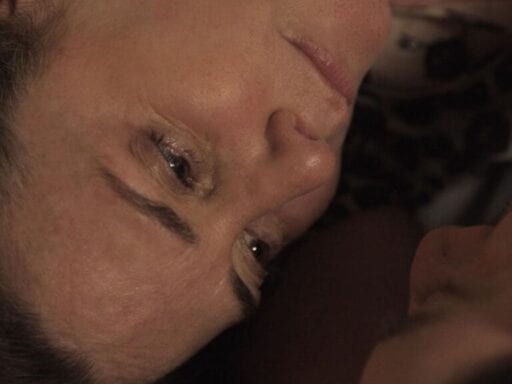 The understated take on coming of age in adulthood is now available on digital platforms.

Every week, new original films debut on Netflix, Hulu, and other digital services, often films with modest budgets and limited fanfare. Cinemastream is Vox’s series highlighting the most notable of these premieres, in an ongoing effort to keep interesting and easily accessible new films on your radar.

The premise: South Mountain is the wise, sometimes bitter, sometimes overwhelmingly emotional tale of a woman learning to fall out of love.

What it’s about: Easily one of my favorite films that I saw at a film festival in 2019, South Mountain is the tale of Lila (Talia Balsam), an art teacher who lives in the Catskills with her husband Edgar (Scott Cohen) and their teenage children. Life is tranquil there. It feels like the kind of paradise you hope you’ll attain after years of hard work and child-rearing: not extravagant, but luxurious in its domesticity.

But Edgar is harboring a secret, something we realize early on when he sneaks away from a family gathering to watch over FaceTime as a younger woman gives birth to his child. Soon, Lila and Edgar’s marriage is unraveling, in a manner that’s both angry and so matter-of-fact that it seems evident they both knew this would happen eventually.

Edgar leaves. And Lila, faced with a new sense of freedom, is forced to reckon with both what she believes about herself and how she might want to live now.

South Mountain is a bit like a coming-of-age film for middle age. Each scene is exquisitely simple but vibrantly alive; director and writer Hilary Brougher has crafted a world in which nothing is cleanly resolved but a future is still possible. Lila’s moments of realization about her life so far, her identity, and what she values come in between the basic moments of living — drinking tea, thinking about things she needs to do around the house, figuring out where to hold on and where to let go. As Lila’s sense of self shifts, almost imperceptibly, Balsam’s performance lets us in on her moods, her emotions, her rediscovery of what she wants and, even, moments of delicious revenge.

Nothing in South Mountain seems contrived or forced. It’s a lived-in movie, mostly filmed in one location. The strictures of a small budget work in South Mountain’s favor; instead of being slick and shiny, it lets us feel like we’re right there in the house, and thus makes Lila’s emotions feel immediate — her anger, her sadness, her exhilaration. It’s as if you’re watching live theater.

South Mountain is a wise movie, too. None of us escapes an occasional forced confrontation with what we thought was true about the world, even if the details are different for everyone. We all are faced with a mirror that reveals our true selves, once in a while. South Mountain suggests that the moments that break us can also give us the space and excuse to grow and re-mold ourselves in new ways. There’s joy in those broken spaces.

Critical reception: South Mountain earned positive reviews from critics following its festival run in 2019. At Indiewire, Eric Kohn writes that “South Mountain begs to be met on its own terms, and on that level, hits every relevant mark. Its final image, of the yawning mountain landscape, provides a cogent reminder that even the bleakest tales of heartbreak and loneliness are dwarfed by nature’s incessant grandeur.”

How to watch it: South Mountain is available on digital on-demand services such as iTunes; see the film’s website for a full list.