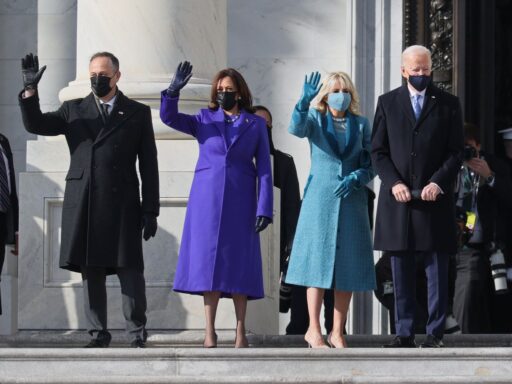 The nation’s attention is on Washington, DC, as Joe Biden is sworn in as the 46th president of the United States. The occasion has been rife with symbolism so far, as the incoming First and Second families seek to usher in a period of healing. “To heal, we must remember,” Biden said Tuesday night during the Covid-19 memorial. “It’s hard. But that’s how we heal.”

The inauguration is not just an ideological dawn for America; the Biden administration intends to signal a stylistic shift with this official appearance. Upon first glance, this transference of image and power is best showcased through Biden’s and Harris’s sartorial decisions. While fashion choice won’t divine the new administration’s policy goals, it is a subtle avenue into the First and Second families’ mindset and how they hope to be perceived by the American public as the latest cast of Washington characters. As of January 20, the Trump brand, its brash Gilded Age aesthetics, and tendency toward fascistic imagery are outdated, politics aside.

Biden, with his 36 years as a senator and eight as vice president, is wearing a navy blue suit from Ralph Lauren, a classically iconic, all-American design label. The brand’s namesake and former designer held humble roots from the Bronx, but the label and logo (of the ultra-elite horseback sport of polo) carries a preppy, patriotic vibe. Biden seems to have a penchant for the brand, having twice worn a black Ralph Lauren polo to receive his Covid-19 vaccine doses.

Meanwhile, the first lady is wearing an ocean blue coat and dress set from Markarian, the design label of upcoming New York luxury designer Alexandra O’Neill. According to a designer press release, blue was Jill Biden’s chosen color “to signify trust, confidence, and stability.” The wool and tweed ensemble is a sleek, fitted look, complete with blue leather gloves and a mask of the same material.

The image of the first female vice president will go down in the history books, and Kamala Harris, no doubt, is aware of the impression she and her inauguration outfit will have. She is accompanied by her husband, Doug Emhoff, who is also wearing Ralph Lauren as the first second gentleman of the country.

Harris is wearing her signature pearls and a royal purple set with pieces from two young Black designers: Christopher John Rogers and Sergio Hudson. She appears committed to elevating young American artists during her tenure, much like former first lady Michelle Obama. Last night at the Lincoln Memorial, Harris donned a camel coat by the label Pyer Moss. The brand was founded by designer Kerby Jean-Raymond, the son of Haitian immigrants, who turned his studio into a PPE donation center during the pandemic. Harris’s inauguration day outfit is full of symbolic references: The string of pearls is a reference to her Alpha Kappa Alpha sorority, and her outfit’s shade of purple — which was present in the logo for Harris’s 2020 bid — appears to be a nod to Shirley Chisholm, the first Black woman in Congress who ran for president in 1972.

Every New Hampshire primary race you need to know about, briefly explained
Nobody’s buying clothes right now. So stores are filing for bankruptcy.
Can the fire catastrophe make Australia’s government finally act on climate change?
What Joe Biden won — and what he didn’t
Top officials are warning of Russian hacking. Trump hasn’t joined them.
Michael Cohen’s claim that President Trump is threatening his family, explained