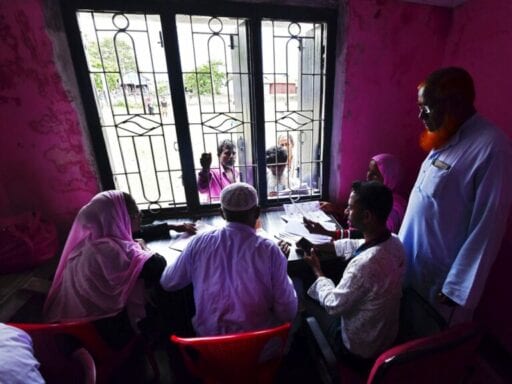 The Indian government stripped citizenship from 2 million people, mostly Muslims. Now it wants to put them in camps.

What would you do if the country you were born in, or the country you’ve lived in for decades, suddenly announced you had to prove your citizenship or else face detention and deportation?

This is the situation nearly 2 million people — most of them Muslims, some of them Hindus of Bengali origin — now find themselves in, because their names do not appear on India’s National Register of Citizens (NRC).

That citizenship list, published last month, is part of the government’s effort to identify and weed out what it claims are illegal immigrants in the northeastern state of Assam. India says many Muslims whose families originally came from neighboring Bangladesh are not rightful citizens, even though they’ve lived in Assam for decades.

If you live in Assam and your name does not appear on the NRC, the burden of proof is on you to prove that you’re a citizen. The obvious move would be to dig out your birth certificate or land deed, but many rural residents don’t have paperwork. Even among those who do, many can’t read it; a quarter of the population in Assam state is illiterate.

You do get the chance to appeal to a Foreigners’ Tribunal. If they don’t buy your claim to citizenship, you can appeal to the High Court of Assam or even the Supreme Court. But if all that fails, you can be sent to one of the 10 mass detention camps the government plans to build, complete with boundary walls and watchtowers.

The first camp, currently under construction, is the size of seven football fields. Even nursing mothers and children will be held there. “Children lodged in detention centers are to be provided educational facilities in nearby local schools,” an Indian official said.

The government has indicated that it plans to extend the NRC process to the whole country. With so many people facing the threat of detention and, ultimately, deportation from the world’s largest democracy, the United Nations, Human Rights Watch, and the US Commission on International Religious Freedom are all warning that this could soon turn into a humanitarian crisis of horrifying proportions.

If the detainees in the camps end up being expelled from India — and that is the government’s plan — this could constitute a wave of forced migration even greater than that triggered by Myanmar in 2017, when hundreds of thousands of Rohingya Muslims were displaced. And in terms of the population detained, it may outstrip the number of people in China’s mass internment system, where an estimated 1 million Uighur Muslims are held.

So far, this looming crisis hasn’t gotten much mainstream attention. Before it escalates into a humanitarian catastrophe affecting millions, it’s important to understand exactly why this is happening.

A brief history of Muslim migration — and Hindu blowback — in Assam

To understand the roots of India’s plan for a massive detention system, we need to go back to the 19th century, when the British set up big tea plantations in Assam. Labor was in high demand and many people from Bengal, Nepal, and elsewhere were brought in to provide it. The local Assamese began to grow anxious about the loss of their culture in the face of shifting demographics.

Then, in 1947, the subcontinent was partitioned. As India and Pakistan were born amid bloodshed, many families rushed into what was newly becoming India — including many Muslims. The native Assamese increasingly resented the newcomers, who were, in their view, taking too many professional jobs and economic opportunities. And another wave of migration was soon to come.

In 1971, the territory that was then East Pakistan gained independence and became Bangladesh. Prompted by the bloody independence war, millions of Muslims fled Bangladesh for India, and many of them remained in Assam.

Simmering tensions boiled over into a massacre of Bengali Muslims in 1983; more than 1,800 were slaughtered. Although a peace accord was signed in 1985, it came at a cost: It included a commitment to create a method to identify people who came in after 1971. They and their descendants would all be considered citizens of Bangladesh, not India.

Plans were devised for a citizenship list, but it turns out sorting through millions of people’s paperwork is complicated, and no government was able to see the process through. But the rise of Hindu nationalism over the past several years — and a concomitant rise in anti-Muslim sentiment — added the pressure needed to make it happen. In 2013, India’s Supreme Court ordered that Assam publish an up-to-date NRC.

In 2018, the state government finally published a draft of the NRC. Four million people discovered they were not on it — including some high-profile Hindus of Bengali origin. Two lawmakers from Assam’s leading minority party, Maulana Badruddin Ajmal and Radheshyam Biswas, were left off the list.

After lots of public outcry and months of appeals, some people managed to get their names onto the NRC. Last month, the final draft was published, this time excluding 1.9 million names — mostly Bengali Muslims.

It’s impossible to know how many of them have been left off the list erroneously. But experts say plenty of them are probably rightful citizens who simply don’t have the documents to prove their status, not least because birth dates are a matter of guesswork in much of rural India and decades-old paperwork can be misspelled and hard to come by.

What’s more, some Muslims are noting how arbitrary the NRC’s determinations seem, and several are reportedly committing suicide because of the anxiety they feel over the citizenship list. As the New York Times reported:

Noor Begum, who lived in a small hamlet in a flood-soaked district, spiraled into depression after finding out that she and her mother had been excluded from the citizenship lists. Her father and seven siblings had made it.

It didn’t make any sense to the family: Why, if they all lived together and were born in the same place, would some be considered Indian while others illegal foreigners?

“Of course she was Indian,” said her father, Abdul Kalam, a retired laborer. “She used to sing Indian national songs at school. She felt very Indian.”

On a bright morning in June, Noor hanged herself from a rafter. She was 14.

“As human rights experts, we are right now saying this process has been arbitrary and discriminatory,” Meenakshi Ganguly, South Asia director at Human Rights Watch, told me. She noted there are concerns that the Foreigners’ Tribunals may well go easier on Hindus than on Muslims who appeal their citizenship determination. Some lawmakers are pushing a Citizenship Amendment Bill, which would carve out exceptions for immigrant Hindus, Sikhs, Buddhists, Jains, Parsis, and Christians — but not Muslims — left off the NRC.

Under Modi, vigilante Hindus have increasingly perpetrated hate crimes against Muslims, sometimes in an effort to scare their communities into moving away, other times in an effort to punish them for selling beef (cows are considered sacred in Hinduism). And last month, Modi erased the statehood of Jammu and Kashmir, India’s only Muslim-majority state, which had previously enjoyed considerable autonomy over its own affairs.

Muslims form approximately 14 percent of the national population and more than twice that in Assam state. In the 2019 Indian election, one of Modi’s central campaign promises was that he’d get the NRC in shape and deal with the Muslim migrants in Assam once and for all. Other members of his ruling Bharatiya Janata Party (BJP) have used dehumanizing language to describe the Muslims there.

“These infiltrators are eating away at our country like termites,” BJP president and home minister Amit Shah said at an April rally. “The NRC is our means of removing them.” Shah has openly said the goal is to deport those deemed illegal immigrants.

“This is a populist way of doing things,” Ganguly told me. “It’s very similar to what you’re hearing in the US: ‘These people come and take away our jobs, our country doesn’t look like it’s ours anymore.’ It’s a narrative that often appeals to people facing challenges in securing jobs and supporting their families.”

Bangladesh for its part says it won’t accept the newly stateless people. As the foreign minister put it, “We are already in much difficulty with the [Rohingya refugees], so we can’t take anymore.”

So where will all these human beings go if they’re deported? Nobody knows.

To make matters worse, the BJP has said it plans to extend the NRC process across all of India. If that happens, we could be looking at the biggest refugee crisis on the planet. Already, the past few years have seen a movement of refugees around the world on a scale not seen since World War II.

Muslim communities have been harshly affected, from the whopping 6.6 million Syrians who have had to flee their country due to civil war, to the 2.5 million refugees from Afghanistan, to the 700,000 Rohingya who were driven out of Myanmar in 2017 alone.

If India goes through with the plan to deport Muslims, it could seriously compound the global refugee crisis, making this a huge humanitarian disaster in the offing.

Photos: what Hurricane Michael’s destruction looks like on the ground
“They should have reacted faster”: 6 Covid-19 survivor stories from around the world
Facial recognition tech is a problem. Here’s how the Democratic candidates plan to tackle it.
Emma, The Hunt, and The Invisible Man will be digitally available soon
A new generation of Black progressives has been elected to Congress
There are a lot of ways to “win” Iowa. Here’s what each candidate needs to do.