Insecure dropped a big reveal in its latest episode. The show didn’t need it. 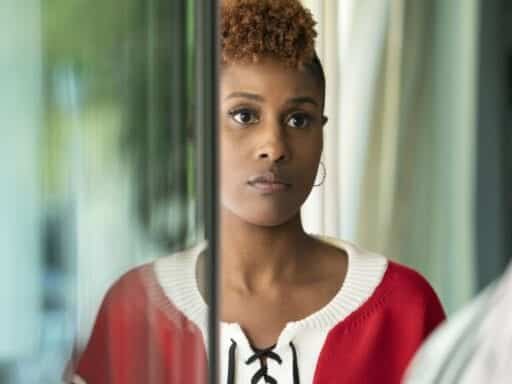 The HBO comedy is better as a friendship story than as a love story.

Why do you watch your favorite TV show? What is it about it that makes you keep coming back to it, again and again?

That’s a deceptively simple question — yet one that’s often very difficult to answer. And of course, the answer will vary from show to show. I might watch Game of Thrones for its elaborate world-building, and Superstore for its lovely character work. The Handmaid’s Tale lets me look at our reality through a skewed lens, while Stranger Things takes me away from it entirely.

But when a show reveals that it’s prioritizing something other than what you care about most, while that may not be a dealbreaker, it can be hard to push past. That’s how I felt as the latest episode of the HBO comedy Insecure, one of my favorite shows, reached its final scene and revealed something the show had clearly been holding onto for some time. I sighed in frustration. My wife squealed in delight. Clearly, we were watching for two very different reasons.

But to talk more about that, I’m going to have to spoil what happened, so if you haven’t seen the episode, you may want to go watch it before you read further.

Do you watch Insecure for the love story or for the friendship story?

What’s most surprising to me about my response to “High-Like” is that, up until its final scene, “High-Like” had been one of my favorite episodes of Insecure to date, because it foregrounded the part of the show that I care about most: the story of a group of friends in their early 30s, navigating the tricky blend of personal and professional lives together.

The episode sends Issa (Issa Rae, also the series’ co-creator), Molly (Yvonne Orji), Kelli (Natasha Rothwell), and Tiffany (Amanda Seales) to the Coachella music festival, so that they might check out Beyoncé’s groundbreaking performance from earlier this year. In true TV comedy fashion, they never succeed in actually getting to see Beyoncé, much less right up front.

They keep getting waylaid by a variety of amusing calamities and poignant meetings, and the episode skillfully pivots from the hilarious (Issa trying to wake up her friends after they all fall asleep while waiting for Molly to show up after work, by banging sheet pans together) to the moving (Issa and new love interest Nathan connecting in a broken Ferris wheel car).

It’s not the show’s most plot-heavy episode, but the combination of the Coachella setting and the characters cutting loose makes for an installment that feels like a respite from the rest of the season’s stories, which have focused on Issa and Molly’s professional dissatisfaction, as well as Issa’s love life in the wake of former boyfriend Lawrence (Jay Ellis) exiting her life permanently at the end of season two. And if you’ve seen the episode already, you can probably guess what I’m going to talk about next.

The episode ends with Issa walking into a 7-11, where she bumps into Lawrence himself, completely unexpectedly. It turns out he hasn’t exited her life — or the show — as permanently as viewers might have thought (or heard). And judging from some of the Twitter reactions I saw, Lawrence’s return was something Insecure had to have known would delight its fans.

I wasn’t quite so happy. I really loved the way the first two seasons of Insecure dug in and examined why the Lawrence and Issa pairing wasn’t quite right, and looked at how both halves of that equation would need to spend some time maturing before they might be able to come together in a way more beneficial to both of them. Bringing Lawrence back just five episodes after the season two finale solidified their breakup felt a little like the series was reneging on a promise it had made to me.

And, look, I know how television works, so I know that Insecure was almost always going to end (several seasons down the road, hopefully) with Issa and Lawrence together, because you don’t invest that much time and attention in a couple without eventually paying it off. And I also know that actor contracts often necessitate paying for a full season, even if you’re not going to use an actor that much, so why shouldn’t Insecure get its money’s worth out of having Jay Ellis around, right?

But it was the first time I felt like the show was letting its fans — who are notoriously super into Lawrence — make creative decisions, instead of deciding for itself. We know so much about Issa and Lawrence’s connection and surprisingly little about Issa’s connection with her three best friends (something Tiffany brings into the text of the show by fretting over her place in the group in the scene immediately before Lawrence’s return). Those relationships deserve just as much attention. That’s obviously an unfair criticism, because if anybody can find new stories to tell featuring Lawrence, it’s Rae and her creative collaborators. They haven’t steered wrong so far.

But it’s still what I felt, because I was so enjoying this season’s focus on other aspects of Issa’s life. And it left me wondering if Insecure is meant to be a coming-of-age story about a woman in her 30s, or a romantic comedy. And if it’s more the latter than the former, is that the show I signed on for?

Issa’s love life is an important part of Insecure, but I hope it doesn’t become the only part

Completely coincidentally, I had Rothwell on my podcast, I Think You’re Interesting, this week, so we got to talk about how the show is constructed. (She’s also a writer on the series.) And she told me that Insecure’s writers view the series as a love story between Issa and Molly, celebrating their friendship and the ways it helps them get through the tumultuous parts of their lives they find themselves in.

And that’s what I’ve keyed into while watching the show. My favorite scenes tend to be the ones that feature Rae and Orji, and I love when that expands to include Rothwell and Seales as well. Indeed, I keep finding myself hoping that the show will do more to expand the lives of Kelli and Tiffany, who are consistently responsible for some of its most cutting lines and best moments.

“High-Like” could have been a great way to do that, and it does, to a point. There’s some focus on how Tiffany’s current pregnancy has affected the group, and I love the way the characters interact, then split off for their own adventures, at both a party they attend and later on at Coachella. The episode’s story — everybody goes to a big event but never actually makes it there — is as old as the sitcom format itself, but that’s because it’s such an effective way to get to know characters outside of their usual domains. And the way that Issa almost takes her friends for granted while waiting on pins and needles for a text from Nathan does underscore how she lets her love life step all over the other people who are important to her.

But that final reveal with Lawrence is the sort of thing that suggests a shift is afoot. The season so far has ably balanced Issa and company figuring themselves out without the presence of a major romantic story arc, but the end of “High-Like” reveals that the show isn’t as done with Lawrence as it pretended to be. And even though Lawrence isn’t a bad character or anything like that, it does feel as if Insecure has sort of exhausted what it can think of to do with him for the time being, sort of similar to how Girls felt compelled to keep Adam Driver around, even though he ceased being Hannah’s foremost love interest about halfway through the show.

But this, of course, is just how these stories work. It’s a lot harder to sustain audience interest in a story about friends struggling together through professional and personal ups and downs than it is a story about star-crossed lovers who finally find their way back to each other. But Insecure doesn’t need the Lawrence boost, not right now. Its ratings are good, the stories it’s telling are compelling, and the laughs are coming as quickly as ever.

I know I’m overreacting — I even knew I was overreacting in the moment, when Lawrence first showed up. And I trust Rae and her team to make sure his return doesn’t take over the show. But I sure wouldn’t have minded a little more time just with Issa and her friends, before the inevitable will-they/won’t-they resurfaced to remind me I was watching a TV show.

Trump’s stimulus obstruction excites fiscal conservatives — and no one else
The emoluments clause, explained for Donald Trump
Harry Potter and the Author Who Failed Us
The past 48 hours in Trump impeachment inquiry news, explained
Migrant detention center: Not much room for kids to play in the warehouse-like facility
The Puppy Bowl, explained