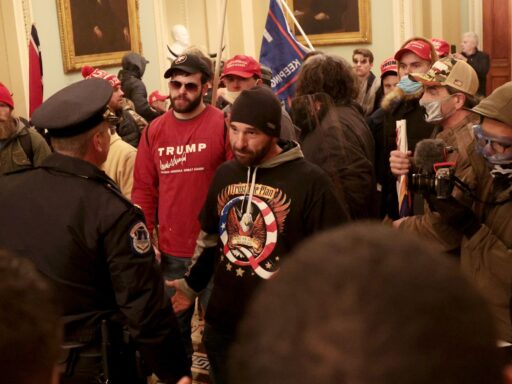 As rioters stormed the Capitol, their shirts spoke loud and clear.

It was spelled out right there on the sweatshirts: “MAGA Civil War January 6, 2021,” the font a kitschy tribute to a Marvel blockbuster. The three men wore their commemorative merch with Trump hats and self-satisfied grins, the violent insurrection for which they’d dressed coming to fruition nearby as a pro-Trump mob stormed the US Capitol.

In the wake of Wednesday’s deadly riot, images of the sweatshirts — presumably ordered days or weeks before the president’s supporters converged on Washington, DC — circulated widely on Twitter as evidence of how much preparation had gone into the events. For anyone paying attention to far-right online communities, this proof was unnecessary: The Capitol rioters had been organizing openly online for weeks, and several national media outlets had run stories warning about potential violence. Supporters certainly would’ve had time to order gear from one of countless custom merch sites — the same mostly innocuous ones from which you might buy a niche novelty tee or a personalized mug for your coworker — for the occasion.

The invocation of a coming civil war was also familiar territory, says Michael Hayden, senior investigative reporter for the Southern Poverty Law Center: In recent years, such rhetoric has moved from the fringes of the white power movement and anti-government extremism into the political mainstream, especially around the 2020 election.

I asked these guys if civil war was what they wanted. “Yes” they replied pic.twitter.com/BLopvJP6Ik

What’s striking about the merchandise is how openly and casually these extreme views are now being displayed — how an untold number of Americans now affiliate themselves with conspiracy theories, bigotry, and the breakdown of democracy the way they may have once shown their pride in a favorite band or sports team.

“It’s indicative that they think this is part of their team, their tribe, their culture now,” says Hayden.

That’s true even if — as with the MAGA Civil War design — the gear isn’t associated with a specific group like the Proud Boys or a movement like QAnon or neo-Nazis.

“That sort of sloganeering, shopping-mall vibe of those T-shirts is really, to stereotype, much more something you would be familiar with if you’re looking at the mainstream GOP base,” says Hayden. “To be wearing it like that in the middle of an insurrection really illustrates the degree to which that group of people in the United States has moved into a place that is much more openly radical and accepting of radical politics.”

Trump rallies have long been a safe space for his supporters’ most repugnant and divisive T-shirts. At a 2016 event, one attendee made headlines for a shirt that referenced lynching: “Rope. Tree. Journalist,” it read. “Some assembly required.”

In the following years, Confederate flags and QAnon symbols proliferated. Last month’s “Million MAGA March” protests in support of Trump’s baseless claims of election fraud ratcheted it up further, with Proud Boys members wearing “Death to Liberals” and “RWDS” (“Right Wing Death Squad”) across their chests. (That night, four people were stabbed in clashes involving the group; its leader, Enrique Tarrio, has since been charged with firearm possession and burning a Black Lives Matter banner that was ripped from a historic Black church.)

The storming of the Capitol brought together such a cross-section of right-wing extremism that many photos of the event are effectively a “Where’s Waldo” of white supremacist, anti-Semitic, and conspiracy theorist symbols. While some will only be recognizable to those familiar with the dark recesses of 4chan, others were unmissable even to the layperson.

One man wore a “Camp Auschwitz” hoodie with the slogan “Work brings freedom” — a rough translation of the message that Jewish prisoners passed at the entrance of the Nazi concentration camp — on the front and “Staff” on the back. He was among those photographed walking the halls of the Capitol after the breach, the ones to whom Trump directed his tough message: “We love you. You’re very special. Go home.”

If the hoodie was meant to shock (and it surely was), it was a success. Twitter users expressed disgust, holding it up alongside a Republican Congress member’s comments about Hitler the day prior, in which she credited the dictator for being “right on one thing,” as evidence of anti-Semitism’s enduring grip within the GOP.

Internet sleuths tracked down and called out custom T-shirt sites carrying versions of the “Camp Auschwitz” design, tagging their payments processors and flooding their servers until the companies yanked the links offline or the websites crashed. Etsy issued an apology after the Auschwitz Memorial flagged a listing on the marketplace. One intrepid resident of Manhattan’s Upper East Side even plastered signs on street corners alerting people to the fact that TeeHands, a custom apparel site with several Nazi-themed designs listed, was doing business out of an address in the neighborhood.

The crowd waged a similar campaign against sites with “MAGA Civil War” styles, but even as they were taken down, others popped up in their place. Experts say this process is all but inevitable today given how easy it is for users to upload a design to these sites, and how few resources most of the sites have to proactively moderate them.

“Because of the ease, it sadly becomes almost like a game of whack-a-mole,” says Christopher Magyarics, a senior investigative researcher for the Anti-Defamation League’s Center on Extremism. A design like this “just keeps popping up here and there. And so you’re inevitably going to find it at some point.”

Because the individuals who upload these designs are anonymous, it’s also unclear who is profiting from their sales in these situations. There are, however, certain e-commerce sites that directly fund some of the groups who participated in the Capitol riot. On the Proud Boys-associated 1776.shop, dubbed “The swag shop of the far right” by Slate, supporters can buy a T-shirt reading “Proud Boys Standing By,” a reference to President Trump’s infamous instructions to the group in a September debate. More explicitly violent offerings include “Kill Your Local Pedophile” (a designation that, for QAnon believers, includes much of the Democratic establishment) and “You’re next comrade / Socialists and communists fly free” (a reference to former Chilean dictator Augusto Pinochet’s practice of dropping political enemies from helicopters).

While several e-commerce and payments companies have cut ties with the president and far-right associates throughout the past week, citing their roles in inciting violence at the Capitol, Magyarics says there will no doubt be hustlers finding ways to sell new, more timely merch in the coming weeks, especially with all the attention they’re getting from the mainstream media.

“Never underestimate the power of the dollar, because I’m sure they’re making some pretty hefty cash off this kind of merchandise,” he says.

What remains to be seen, says Hayden, is how long this attention lasts.

“Every time these things happen, there is a moment of, ‘Oh, my god, what is this? How is this going on?’ And that seems to be the only time we notice these T-shirts that call for civil war, this rhetoric where people are talking about ‘no political solution,’ which used to be considered totally taboo for mainstream Republicans,” he says.

“And then two or three days later, the news cycle moves on and we have the same pundits suggesting that concerns about far-right extremism are overblown and that it’s just liberals trying to generate political points.”