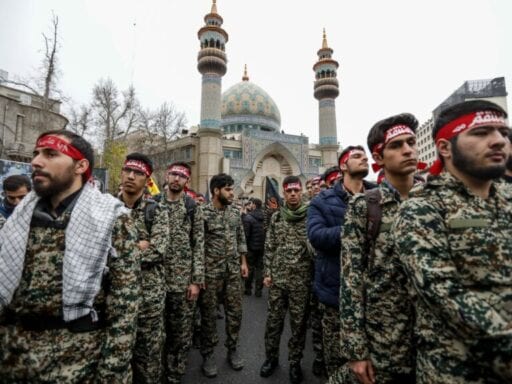 Iran will no longer limit the number of centrifuges it operates, but will still allow oversight from the International Atomic Energy Agency.

The Iranian government announced it would no longer adhere to limits imposed by the 2015 nuclear deal in the wake of national outrage over the US’ assassination of one of the country’s top officials, General Qassem Soleimani, in Baghdad Friday.

It’s Iran’s latest step in pulling away from the deal, which eased sanctions against the country in exchange for compliance with nuclear restrictions. And it comes nearly two years after President Donald Trump withdrew the US from the agreement, while imposing harsh sanctions on the country, arguing that the deal was ineffective and that Iran was supporting violent militias like Hezbollah.

“The Islamic Republic of Iran will end its final limitations in the nuclear deal, meaning the limitation in the number of centrifuges,” the government said in a statement Sunday. “Therefore Iran’s nuclear program will have no limitations in production including enrichment capacity and percentage and number of enriched uranium and research and expansion.”

The announcement does not mean Iran is fully scrapping the deal, known as the Joint Comprehensive Plan of Action (JCPOA), Iranian foreign minister Javad Zarif said.

According to Zarif, Iran will continue to allow the International Atomic Energy Agency (IAEA), the international nuclear watchdog organization, to review its nuclear research, and would be willing to rejoin the agreement if sanctions against it are removed.

As 5th & final REMEDIAL step under paragraph 36 of JCPOA, there will no longer be any restriction on number of centrifuges

These assurances are not likely to pacify the country’s critics, but the fact Sunday’s announcement leaves room for a new deal and contains some safeguards against the open weaponization of the country’s nuclear work suggests a measured approach from Iran at a moment in which it is engaging in a tense process of military escalations with the US.

The Obama-era deal between the US, Iran, Britain, France, Russia, China, Germany and the European Union put tight restrictions on Iran’s nuclear program and in return, eased some international sanctions against the country.

Trump argued that the deal was ineffective — and despite US allies’ insistence that Iran was keeping up its part of the deal, he withdrew the US from the agreement in 2018 and reimposed sanctions on Iran’s oil sector.

The administration continued to impose more sanctions targeting Iran’s ability to trade and acquire currency and its oil exports in efforts to pressure Iran to negotiate what it said would be a new, better nuclear deal. Iranians have retaliated by bombing oil tankers, shooting down a US military drone, and slowly ramping up its missile activities, among other moves.

Last July, the Iranian government made it clear it planned to stop adhering to some elements of the nuclear deal by stockpiling more low-enriched uranium than the agreement allows. Many of the other parties in the deal had tried to keep it alive, but failed to effectively combat the US’ sanctions. Vox’s Alex Ward reported at the time:

There’s a reason Iran is choosing to act like this. “If Iran is not willing to take sanctions and suffer, and if it’s not willing to compromise and capitulate, then it needs to do something to change the situation,” Afshon Ostovar, an Iran expert at the Naval Postgraduate School, told me in June.

These tactics are all part of Iran’s playbook. “This is more or less consistent with Iran’s behavior over the last 15 years,” Ostovar said. “Really since 2005, Iran has shown a number of times that it is willing to push back against international pressure or foreign pressure. It’s willing to push back against the US by engaging in aggressive or assertive behavior that could risk triggering the conflict with the United States.”

Sunday’s announcement was in keeping with these aggressive moves. But many experts noted Sunday that given the US’ surprising assassination of Soleimani and Iran’s furious response, Iran’s departure from the nuclear deal could have been more aggressive. It still appears willing to negotiate, although unless the US is will to change its position any negotiations are unlikely to bear fruit.