Iran’s coronavirus outbreak has hit the highest levels of government 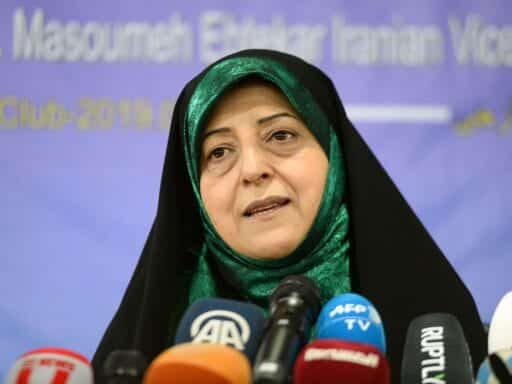 Share
Loading...
A file photo dated on January 20, 2019, shows Iranian Vice President for Women and Family Affairs Masoumeh Ebtekar speaking at a press conference on the rights of women and children in Tehran, Iran. | Fatemeh Bahrami/Anadolu Agency via Getty Images

The supreme leader is also at risk.

The coronavirus has hit the highest levels of Iran’s government.

Mohammad Mirmohammadi, a member of a top council that advises Supreme Leader Ali Khamenei, died Monday of Covid-19, the disease caused by the coronavirus. His death follows those of two other Iranian leaders — a former ambassador and newly elected member of Parliament — who also succumbed to the illness.

Reports indicate there are a total of about seven top officials who are sick, including Iraj Harirchi, the head of the regime’s coronavirus task force, and Iranian Vice President Masoumeh Ebtekar.

The disclosure of Ebtekar’s illness last week was particularly troubling for Iran’s leadership, as it came only one day after she attended a Cabinet meeting where she was in close proximity to regime officials, including the 80-year-old Khamenei. That he and other Iranian leaders are elderly means they are at increased risk of dying from the disease, though there is currently no evidence to show Khamenei is sick.

Still, it’s clear the Iranian government is in crisis even as it contends with nearly 1,000 confirmed cases of coronavirus in the country. It’s gotten so bad that Minister of Foreign Affairs Javad Zarif has tweeted out calls for assistance, asking for medical equipment to help treat the nation’s outbreak. On Monday, three European countries offered about 5 million euros in support, but it’s unclear if that will make a big difference at this point. The US has also offered to help, though its sanctions on the country remain.

That the virus has been able to spread to the highest levels of Iran’s government is further evidence of the country’s astonishing failure to manage the outbreak so far.

“It’s symptomatic of the revolutionary state’s highly ideological and often inept approach to governance,” Suzanne Maloney, an Iran expert at the Brookings Institution, told me. “What’s maddening is that Iran has enormous scientific capabilities and a well regarded public health system. So this is entirely a leadership failure.”

Indeed, as the number of confirmed infections ticked upward in recent weeks, Tehran either didn’t understand the severity of the problem or, more likely, quashed evidence of the outbreak altogether. The lack of alarm allowed hundreds to go untreated in Iran, while millions of workers, religious pilgrims, and others who travel to and from the country every day likely continued to spread the disease.

Which means Iran’s problems — as bad as they are — are only likely to get worse.

Growing calls to “defund the police,” explained
Hong Kong protests turn violent as Beijing celebrates the Communist regime’s founding
Here’s what eating out might look like when restaurants reopen
Trump threatens to permanently cut WHO funding if it doesn’t reform in 30 days
Rep. Elijah Cummings’s funeral featured a powerful indictment of Trump’s character
Read the transcript of Trump’s call with Ukraine’s president