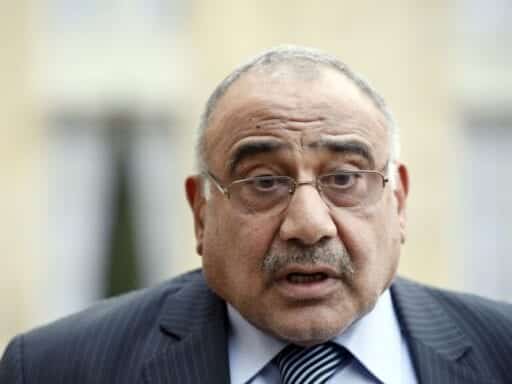 Share
Loading...
Iraq Prime Minister Adel Abdel Mahdi answers journalists questions after a meeting with French president at the Elysee palace on April 02, 2015, in Paris. At the time, he was Iraq’s oil minister. | Alain Jocard/AFP via Getty Images

Iraq’s Prime Minister Adel Abdul Mahdi announced plans to resign in the wake of a rapidly rising death toll in anti-government protests across the country.

Mahdi made the announcement on Friday, just one day after security forces opened fire on a protest group in Nasiriya, a city in Iraq’s south. At least 24 people died, and more than 210 were injured, according to the United Nations High Commission for Human Rights. Four protesters died in Baghdad and 10 died in Najaf Thursday — making it one of the bloodiest days since the protests began in October.

The protests began in opposition to corruption, Iraq’s high unemployment rate, and foreign interference, but have now evolved into a complete rejection of the political establishment. And many protesters have expressed anger over the violent response that has met demonstrators: at least 354 people have been killed by security forces, with at least another 8,104 injured.

Friday, Mahdi headed that call, saying he was swayed by the religious leader’s words and would voluntarily step aside in order to help Iraq “preserve the blood of its people, and avoid slipping into a cycle of violence, chaos and devastation.”

Following the resignation, protesters in Baghdad’s Tahrir Square, at which many demonstrators have camped out for almost two months, burst into celebration. But many noted their joy was mixed with caution: Mahdi’s resignation came at the cost of hundreds of lives and many acknowledged change will not be imminent.

Political rivalries and the influence of Iran led to Mahdi staying on as prime minister when protests initially began in October — at that time, he pledged to stay in his position until a successor was agreed upon. But given it took the country’s ruling parties one year to agree to Mahdi as prime minister, protesters were not optimistic he would be leaving office any time in the near future.

Now that he has agreed to resign, the search for the successor will need to be accelerated. Parliament could vote to accept Mahdi’s resignation as early as Sunday — but that’s just the beginning of a long series of reforms that need to be addressed.

“We want true electoral reforms. We want real change,” a protester named Mortada told the Associated Press. “It’s not one man, it’s the whole system that needs to resign.”

The protests first began on October 1 and were fueled by Mahdi’s demotion of Staff Lieutenant General Abdulwahab al-Saadi, a popular counter-terrorism chief. Despite his role in helping defeat ISIS, many presumed al-Saadi was sidelined because he worked closely with the US — which infuriated Iran, a country that’s been criticized for being too heavily involved in Iraqi politics.

While anger over al-Saadi’s demotion lit a fire under many civilians, their grievances against authorities weren’t limited to the official’s treatment. Demonstrators protesting on behalf of al-Saadi also began to vocalize socioeconomic criticisms, from concerns over high unemployment rates, the need for better electricity, and what they said was the government’s neglect of damaged infrastructure.

These demonstrations ballooned into the current, sweeping anti-corruption protests that target the government broadly, demanding power be restructured in the country and rejecting the influence of Iran, which, according to reports by the Intercept and New York Times, has worked to support Mahdi and to meddle in Iraqi politics.

Mahdi’s decision to step down satisfies just one of the protesters’ many demands. Specifically, the protesters are calling for sweeping changes that include: resignation of all high-profile politicians; the resignation of the current parliament and provincial council; electoral reforms; and a rewrite of the constitution.

Or as Taif, one of the protesters occupying Tahrir Square, told the Associated Press: “Until this sick system is destroyed, we won’t leave.”

The current system of government, which was meant to represent Iraq’s Shia, Sunnis, and Kurds, was built with the help of the US after it led an invasion in 2003 that brought down Saddam Hussein. However, the people are pointing to it as the root cause of their grievances, as reported by Vox’s Jen Kirby:

The political class has benefitted as the rest of Iraq has suffered. Corruption permeates every level of government, and officials largely act with impunity. Political leaders benefit from lucrative patronage networks. According to Haaretz, $450 billion in oil revenues that should have gone back to the state has gone missing, most likely into the pockets of political elites and their cronies.

As Iraqis deal with electricity shortages and cities still in ruins, they’re directly linking that political corruption with their own worsening situations.

“This is reaction to 16 years of system failure,” Fanar Haddad, a senior fellow at the Middle East Institute, told me. “The sense that this is a political system that has cohered that robs the many for the services of the few and those with connections to the few.”

For many of the protesters, Mahdi perfectly represents this “system failure.” Despite promising to overhaul the economy, the unemployment rate have risen on his watch. And Mahdi is not the leader of a ruling coalition, meaning the public had little say in his elevation. Instead, he was chosen after a year of deliberation by two parties — Sairoon and Fatah — after neither party won a plurality in the May 2018 elections. And leaked Iranian intelligence reports suggest Iran strongly supports Mahdi — for protesters who routinely burn the Iranian flag and chant “Iran out,” such a partnership is unacceptable.

It’s unclear how fast things will move following Mahdi’s resignation announcement. Parliament could vote to accept his resignation as early as Sunday, turning Mahdi’s cabinet into a caretaker government — one that has minimal duties to keep the country functioning — until a new candidate is nominated.

Historically, however, this process has taken months as different political factions try to balance power. It doesn’t help that the constitution doesn’t state how long Mahdi’s government can hold on to its caretaker status if the nomination of a new candidate is delayed.

There’s also concern that the disputes between Sairoon and Fatah will reemerge, throwing the country’s political state into more uncertainty. US officials have voiced fears that should the two parties come to a protracted impasse, it could allow for extremists to grow in Iraq again.

And it’s also unclear to what extent new leadership and current reforms recommended by Iraq’s president will satisfy protesters. Most, like Taif, have signaled no plans to abandon their protests and that they will continue pressuring their government to commit to more extensive reforms.

Support for Trump’s impeachment is nearing Nixon’s levels during Watergate
As Black Friday approaches, Amazon workers demand better labor conditions
The US just broke its record for the highest number of new coronavirus cases in a day
The hottest new thing in sustainable building is, uh, wood
Vox Sentences: The US’s attack on Huawei
The Trump administration finally has one good idea to lower drug prices