Is a high-ranking House Democrat about to lose his primary? 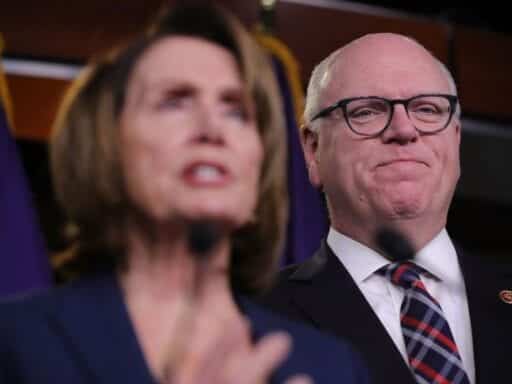 A primary for a New York congressional district is the perfect proxy war for Democrats.

If you could create the ultimate proxy war for the two camps who have been fighting in the Democratic Party since 2016, it would be the primary contest between Rep. Joe Crowley and Alexandria Ocasio-Cortez in New York.

Crowley is part of the House Democrats’ leadership team, with close ties to Nancy Pelosi and Wall Street. He’s raised more than $3 million this year. He’s toed the party line on progressive policies, even participating in a recent demonstration on family separation, in which he blocked off an entire street with Reps. Luis Gutierrez (D-IL), Pramila Jayapal (D-WA), and John Lewis (D-GA), among others.

Ocasio-Cortez is a Latina Bronx native and community organizer who is more or less running on a viral campaign ad produced by a pair of Detroit-based Democratic Socialist for America (DSA) activists. She has raised just $200,000, mainly in small donations. She’s running on a boldly progressive platform, including Medicare-for-all, a federal jobs guarantee, and abolishing Immigration and Customs Enforcement (ICE).

“This race is about people versus money. We’ve got people. They’ve got money,” Ocasio-Cortez says in the ad.

If this were any other year, it’s likely this race wouldn’t get any attention at all. A candidate with no money — even one with a compelling personal story — against one of the most powerful House Democrats wouldn’t even be a contest. After all, Crowley is a 10-term incumbent who is the fourth most powerful Democrat in House leadership.

But this primary has become a proxy for the debate over establishment Democrats versus democratic socialism that has reared its head in the party since Sen. Bernie Sanders’s blockbuster 2016 candidacy. It’s clear that Ocasio-Cortez’s supporters are hoping to use the fact that Crowley has so much money and power against him. And if she’s successful, it would be a huge upset — one not seen since Eric Cantor lost his primary to David Brat in Virginia in 2014.

My latest Political Crystal Ball… I predict that my home district of NY14 will support 28-year-old Alexandria Ocasio-Cortez (@Ocasio2018) & will hand incumbent Rep. Joe Crowley the most stunning primary defeat since Dave Brat knocked off Eric Cantor in 2014. #CheddarLIVE pic.twitter.com/570PIgHirW

There’s no polling to speak of, so anything could happen.

Who is Joe Crowley?

Crowley has been in the House of Representatives since 1999. An Irish-American born in New York City, he’s represented the 14th Congressional District, which includes a Latino-heavy portion of the Bronx, since 2013.

But it’s not his longstanding presence in Congress that has brought him under scrutiny — it’s his deep ties to Democratic leadership. Close to House Minority Leader Nancy Pelosi, Crowley is the number four Democrat in the House and is widely considered to be positioning himself as her successor should Pelosi step down.

And it’s not an academic question. There are a lot of House Democrats who aren’t happy with Pelosi’s leadership and her firm grip on choices for prized committee seats. In the run-up to 2018, she’s become something of a punching bag on both the right and the left, with an increasing number of promising Democratic candidates running this year saying they wouldn’t support her for speaker if Democrats retake the House.

This could provide Crowley with an opening, but the New York Congress member has made it clear he doesn’t plan to challenge Pelosi if she runs for speaker in 2018 — which she’s made clear she will do.

“We will win. I will run for speaker. I feel confident about it. And my members do, too,” Pelosi said during an editorial meeting with the Boston Globe in May. Part of her rationale? That otherwise the table will be filled with “five white guys,” a nod to the rest of her leadership team and the leadership team of the Republicans. Crowley is, undoubtedly, one of those “white guys.” He also has a disadvantage being from New York, the home state of Senate Minority Leader Chuck Schumer.

He has stepped up as a Democrat can fundraise for the party; the Washington Post reports he is spending his spare time “crisscrossing the nation to boost House Democrats in their bid to take back the majority in the November elections.” The price for attending a typical fundraiser with Crowley is $1,000 a head.

Despite his nearly $3 million in fundraising, his 2018 reelection bid has been far from smooth sailing. A March Politico story indicated that Crowley was so worried about the Latino presence in his district leaving him open to a primary challenger that he hired lobbyist Brian Meara, who has close ties to the state assembly, to shore up a prime district when the new maps are drawn after 2020.

Some leftists suggested Crowley aimed to get arrested at a recent family separation rally purely because of Ocasio-Cortez’s challenge. Crowley told Vox he had been arrested for protesting at an immigration rally before; he said was just standing up for what he believed in.

“I come from a law enforcement family, but at the same time, I come from a family that taught me to stand up to bullies, to stand up for those who are less fortunate, for the underdogs,” Crowley told Vox.

Crowley also sent a surrogate to a primary debate, which led to a scathing editorial from the New York Times. “This is the second primary debate in which Mr. Crowley was a no-show. A spokeswoman for Mr. Crowley said he had scheduling conflicts that wouldn’t allow him to attend the two debates, inevitably leaving voters to wonder — what are we, chopped liver?” the editorial read.

Who is Alexandria Ocasio-Cortez?

Ocasio-Cortez couldn’t be a bigger contrast from Crowley. She was born in the Bronx to working-class parents. Her mother is Puerto Rican. Her father is from the South Bronx. She’s a former staffer for the late Sen. Ted Kennedy. She’s 28, which would make her one of the youngest members of Congress if she were elected.

She’s certainly portrayed herself as a woman of the people, playing up her working-class roots in her viral campaign ad.

It’s time for a New York that works for all of us.

On June 26th, we can make it happen – but only if we have the #CourageToChange.

It’s time to get to work. Please retweet this video and sign up to knock doors + more at https://t.co/kacKFI9RtI to bring our movement to Congress. pic.twitter.com/aqKMjovEjZ

The video, which shows Ocasio-Cortez riding the subway and doing community organizing work, was created by Means of Production, a media production company run by DSA activists Naomi Burton and Nick Hayes. She’s earned endorsements from newer progressive groups like MoveOn and gotten extensive coverage in the Intercept.

But perhaps what’s most exciting for progressives about her campaign is the degree to which she is running to Crowley’s left. As a member of the DSA, her website is a laundry list of every blue-sky lefty policy: Medicare-for-all, housing and jobs guarantees, gun control, ending private prisons, abolishing ICE, and investment in post-hurricane Puerto Rico.

She’s also become something of a media darling, getting coverage in Vogue, BuzzFeed, and the Nation. She wants this New York district to be represented by a bold progressive who doesn’t need to be elected with the help of Wall Street.

What this means for the Democratic Party

Though Ocasio-Cortez is decidedly to the left of Crowley, there’s no doubt that Crowley has been a champion of progressive policies. If Crowley were to lose, it would be a shakeup not just of the policies that Democrats support but how they go about getting elected.

Crowley could be in a similar situation to Cantor — a strong fundraiser that suddenly found himself knocked off by an insurgent candidate who is running on someone who isn’t a creature of Washington.

Until now, Democrats have seen big money in politics as simply a deal with the devil that had to be made. Democrats are so often outspent by Republican mega-donors that they viewed courting big-dollar donors and corporations as just part of creating a level playing field.

But if one of Democrats’ top fundraisers and likely successor to Nancy Pelosi can be toppled — and that’s a big if — perhaps Democrats need to rethink that deal.

If Crowley manages to emerge unscathed, well, the message will likely be that those big-dollar donors are just the cost of doing business.