Is abuse of power an impeachable offense? 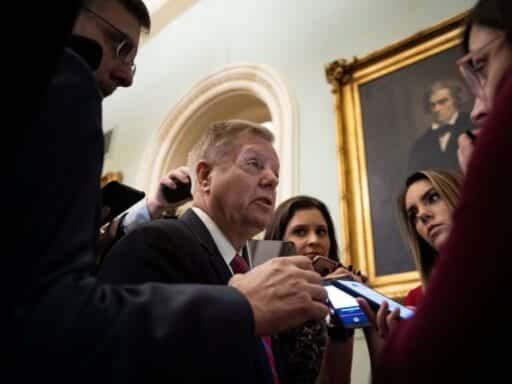 Share
Loading...
Sen. Lindsey Graham ahead of the Senate’s receipt of the articles of impeachment. | Brendan Smialowski/AFP/Getty Images

Trump’s allies don’t think so — even though abuse of power was the first article of impeachment.

In December, Trump was, of course, impeached in part on charges of abuse of power. But that isn’t stopping Republicans, including members of Trump’s legal team, from making the claim that abuse of power isn’t impeachable a key part of their defense ahead of the president’s impeachment trial in the Senate.

Sunday, Alan Dershowitz, a member of Trump’s legal team, told ABC’s George Stephanopoulos abuse of power “is not within the constitutional criteria for impeachment.” Even if lawmakers were to prove beyond a shadow of a doubt Trump abused his power, Dershowitz argued, it would not be impeachable, because it is not “criminal behavior, criminal in nature.”

According to Dershowitz’s interpretation of the Constitution and the writings of its framers, the founding fathers didn’t intend for Congress to remove a president based on political charges such as abuse of power or obstruction of Congress, because they are too “open-ended.”

“You can’t charge a president with impeachable conduct if it doesn’t fit within the criteria for the Constitution,” Dershowitz said.

Dershowitz — known for defending sex offender Jeffery Epstein and who has been accused by several Epstein survivors of having sexually abused them, accusations he denies — plans to make this case in greater detail before the Senate in a presentation on “what is a constitutionally authorized criteria for impeachment.”

Many legal experts — including those who testified during the inquiry about what constitutes impeachable offenses — disagree with Dershowitz’s reading of the Constitution.

Duke University’s Lisa Kern Griffin summed up this view in telling Vox’s Sean Illing, “Although the Constitution expressly cites bribery as grounds for impeachment, it does not require that any criminal offense be committed in order for impeachment to occur.”

But Dershowitz — and figures like personal lawyers to Trump Jay Sekulow and Rudy Giuliani, White House counsel Pat Cipollone, and the president himself — think Democrats and experts like Griffin are mistaken.

Dershowitz, Sekulow, and Cipollone will bring their case to the Senate floor. Presidential allies who will be listening to their arguments on the point (and who will not be allowed to speak during the trial itself) have also shown they’re onboard with Dershowitz’s defense.

For instance, Sen. Lindsay Graham appeared on Fox News Sunday to criticize the impeachment articles’ definition of “abuse of power.”

“Abuse of power is so poorly defined here I don’t know presidents in the future can confirm their conduct,” Graham said. “It’s the first impeachment in history where there’s no allegation of a crime by the president.”

Abuse of power falls under “high crimes and misdemeanors”

Democratic lawmakers obviously have a very different opinion on the gravity of “abuse of power” than their Republican peers. House Intelligence Chairman Rep. Adam Schiff called Dershowitz’s argument “absurdist” Sunday while on ABC’s This Week.

“The only thing really new about the president’s defense is that they’re now arguing, I think, because they can’t contest the facts, that the president cannot be impeached for abusing the power of his office,” he said.

Again, many legal scholars have made the case for abuse of power falling under the Constitution’s high crimes and misdemeanors, and Schiff went on to call Dershowitz position “far out of the mainstream.”

Supporting the Democrats’ case is the fact that they have precedent on their side. As Vox’s Sean Collins reported, Bill Clinton was impeached for the high crimes and misdemeanors of perjury and obstruction of justice. And Richard Nixon could have been impeached for abuse of power and contempt of Congress if he hadn’t resigned before the House voted on impeachment.

And as Vox’s Ezra Klein points out, abuse of power may not be explicitly written out in the Constitution as an impeachable act, but it is generally considered to fall under the category of high crimes and misdemeanors, especially if one considers that “misdemeanor” in the framers’ time meant “ill behavior; evil conduct; fault; mismanagement.”

With that definition in mind, Klein states that a president who tries to manipulate the political system — such as Trump’s plan to force the Ukrainian government into investigating his political rival — should be impeached.

When [Charles Black, Jr., author of Impeachment: A Handbook] spoke of offenses that “so seriously threaten the order of political society as to make pestilent and dangerous the continuance in power of their perpetrator,” this is the kind of offense he described: an act that forces us to doubt the nature of elections so long as the perpetrator is a participant.

This is why abuse of power is precisely the kind of offense that counts as a high crime and misdemeanor, whether or not the abuse in question is criminal: There is nothing more corrosive to systems of government than permitting officials to abuse power in order to amass power. When that is permitted, systems quickly crumble into autocracy.

With respect to Trump, the issue of whether abuse of power is impeachable is settled: He has been impeached for it. And jurors in his Senate trial are not likely to be affected much by Dershowitz’s argument — senators like Graham have stated they agree with him, and Democrats probably will not reject the work and arguments of they House colleagues. All this suggests that although Trump was impeached for abuse of power, he probably will not be removed from office over it.

One Good Thing: A Danish drama perfect for political devotees, now on Netflix
Trump has rejected media calls of a Joe Biden victory
Vox Sentences: Internet down and protesters out in Iraq
NBC’s Trial & Error is a joyful break from reality
The emoluments clause, explained for Donald Trump
Congress takes up the fight for the future of the Postal Service