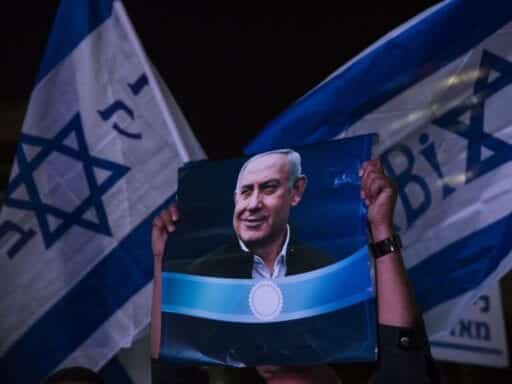 Share
Loading...
Supporters hold up banners at a rally against the indictments of Benjamin Netanyahu on November 26, 2019, in Tel Aviv, Israel. | Amir Levy/Getty Images

The strong primary performance suggests Israel’s controversial leader is still in the game.

Israeli Prime Minister Benjamin Netanyahu won a landslide victory in his party primary on Friday, thrashing his rival for leadership of the right-wing Likud party by a vote of 72 percent to 28 percent.

Netanyahu’s decisive win came just weeks after being indicted on charges relating to corruption and bribery, and signals that the loyalty of his base is not wavering in the face of his tremendous legal troubles and failure to assemble a governing coalition in two general elections earlier this year.

The results also suggest that Israel might be back on track for yet more political deadlock.

Israel held general elections twice earlier this year, and both times Netanyahu’s Likud Party failed to come close to winning a majority and instead ended up virtually tied with the centrist Blue and White Party. And both times, Netanyahu was unable to cobble together a majority in parliament that could serve as a governing coalition.

Now the country is headed for a third general election — within the span of a year — in March. With Netanyahu looking strong, he could end up in yet another virtual tie with the Blue and White party, which is led by former army chief of staff Benny Gantz, and end up locked in the same electoral stalemate as before.

Roughly half of the 116,000 paying members of the Likud party went out to the voting booths on Thursday — a typical level of turnout that appeared undampened by storms and the obligations of the Hanukkah holiday.

The fact that Netanyahu fended off a Likud veteran, former interior and education minister Gideon Saar, by more than 40 points is likely to reinvigorate Netanyahu’s campaigning efforts and allow him to allay concerns among his supporters that the indictment spells the end of his political career.

“This is the time to unite, to bring a sweeping victory to the Likud and the right in the Knesset elections,” Netanyahu told reporters on Friday. “The final and sweeping primary decision was a huge expression of trust in my way, in our way.”

But Netanyahu, who’s been in power since 2009, is a controversial figure in Israeli politics — not only because of his increasingly authoritarian tendencies, but also because of the three corruption charges he faces.

Netanyahu and Gantz of the Blue and White Party have discussed the prospect of forming a unity government, but Gantz has said that he refuses to work with a prime minister who is under indictment. At the moment, Netanyahu’s best chance at dealing with that problem is winning big in national elections.

In November, Netanyahu was indicted on three cases of financial and political misconduct, which carry the possibility of jail time.

As Vox’s Zack Beauchamp explained at the time, the charges against Netanyahu are very serious:

The second and third, Cases 2000 and 4000, involve some more insidious stuff: the abuse of the powers of office for political gain. In this respect, they’re similar to the Ukraine scandal in the US — except the quid pro quo is with domestic media rather than a foreign power.

In Case 2000, Netanyahu allegedly attempted to strike a deal with the owner of Yedioth Ahronoth, Israel’s largest newspaper: He would pass a law limiting circulation of one of its rivals, the already pro-Netanyahu Israel Hayom, in exchange for more favorable coverage in the Netanyahu-skeptical Yedioth. This scheme apparently never entered force.

In Case 4000, Netanyahu allegedly manipulated regulatory powers in order to benefit Bezeq, a major Israeli company. In exchange, the Bezeq-owned news organization Walla gave the prime minister more favorable coverage. Unlike Case 2000, this allegedly went beyond the conspiracy stage, with Netanyahu trading regulations for good press over a five-year period.

The technical charges are bribery, fraud, and breach of public trust — the former the most serious under Israeli law, and the most damaging to Netanyahu.

Next week, Israel’s Supreme Court will examine whether or not an indicted member of parliament can be prime minister, but it’s unclear when a ruling will be released. As the Associated Press reports, if the court determines that Netanyahu’s indictment makes him ineligible to be prime minister, it could trigger a constitutional crisis.

Netanyahu’s best hope for dealing with the charges against him is a huge victory for Likud in the next election; he could then seek parliamentary immunity from prosecution.

Beauchamp wrote in September — in anticipation of the possible indictments — that a maneuver to ensure immunity for Netanyahu would deal a huge blow to democratic norms in Israel:

So far, Netanyahu has not had enough support to push [an immunization] bill through. But if he emerges with a more pliant Knesset, it’ll likely be at the top of his to-do list. An immunity law would represent a double blow to Israeli democracy, both legitimizing the prime minister’s efforts to neuter the media and blocking an independent check on wrongdoing by the premier. It would not yet put Israel in the company of faux-democracies like Hungary and Turkey, but it would push the country in that direction, continuing Israel’s slide down what feels like a very slippery undemocratic slope.

If reelected, Netanyahu is also expected to push a bill that would allow the Knesset to overturn Israel’s High Court rulings. This would not only help Netanyahu protect himself from legal troubles but also help him cement support on the Israeli far-right, which has long hated the court for its rulings protecting Palestinian and minority rights.

Much could happen between now and Israel’s national elections in March. But Netanyahu’s strong showing in his party primary suggests that much of his base has not been swayed by corruption charges or the messy electoral saga that has been going on for the better part of a year.

Marriage Story’s gently funny take on love and divorce has won plaudits. Will it win Best Picture?
Gordon Sondland, the ambassador at the center of the Trump impeachment inquiry, explained
Read the transcript of Trump’s call with Ukraine’s president
Brett Kavanaugh was asked about abortion in his confirmation hearing. His answer tells us nothing.
Report: “tent cities” for separated migrant children cost more than keeping them with their parents
Mike Pompeo is the Trump administration’s ultimate survivor