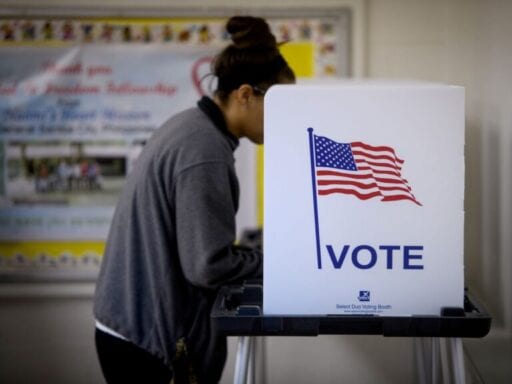 Share
Loading...
A woman cast her vote at at a church polling location on November 6, 2018 in Cambridge, Ohio.  | Justin Merriman/Getty Images

The Ohio primary is now seemingly off.

According to Gov. Mike DeWine, who had urged courts to delay the election, Ohio’s state health director Amy Acton has declared a health emergency and closed the polls as a result.

Here is the three-page order signed tonight by @OHdeptofhealth Director @DrAmyActon that closes all polling locations in #Ohio due to the risk of #COVID19 faced by both voters and poll workers. #COVID19OhioReady pic.twitter.com/XRd4zJH4so

DeWine’s announcement, which came late Monday, followed a tumultuous back-and-forth over whether the primary should take place. Earlier in the day, the governor had advocated for the state to push the primary to early June in order to protect voters and poll workers from the coronavirus outbreak. A Franklin County judge, however, said the efforts to postpone the primary weren’t “timely” enough and ordered the election to continue as planned.

DeWine has emphasized that holding the primary could endanger people as the coronavirus continues to spread.

“During this time when we face an unprecedented public health crisis, to conduct an election tomorrow would would force poll workers and voters to place themselves at a unacceptable health risk of contracting coronavirus,” DeWine said in a statement.

DeWine had also noted that urging people to go to polling stations would contradict new guidance from the Trump administration, which has called on people to avoid gatherings of 10 or more people.

“We can’t tell people it’s in their best interest to stay home and at the same time tell people to go vote,” DeWine said. He added that Ohio Secretary of State Frank LeRose would seek a remedy through the courts to figure out “voting options” for those who still wanted to participate in the primary.

The state, as of Monday, had seen 50 positive tests for the coronavirus. It’s one of four major states that was scheduled to hold a primary on Tuesday. The other three, Florida, Illinois, and Arizona, are still slated to move forward with their elections.

The logistics of this Tuesday’s primaries have been especially fraught, given recent CDC recommendations about social distancing and avoiding crowded places, a descriptor that can often refer to polling stations where voters end up queuing in long lines.

All four states had imposed some precautions to help protect voters and polling workers: They’ve shifted hundreds of polling stations away from senior living facilities to other community locations like school and libraries, extended polling hours and committed to rigorously sanitizing machines.

As major cities close down in-person service at restaurants and bars, and discourage other widely attended events like sports games, however, the decision to hold primaries on Tuesday continues to raise questions about how to most effectively protect those participating in them.

DeWine has garnered praise from public health experts for recommending key precautionary measures like closing down large events and in-person college classes early on in the crisis.

Georgia, Kentucky and Louisiana, three states with later primaries, have all pushed theirs back.

Mail-in voting and absentee ballots could make a big difference

While the states holding primaries this week were faced with unique challenges given the timing of their elections, states that have races later in the calendar could continue to encourage voter participation amid the coronavirus outbreak via vote-by-mail and absentee options.

In Ohio, for example, absentee ballots can be submitted via mail. And in states like Washington, which has already voted, mail-in voting comprised the majority of the ballots that were cast.

Due to the coronavirus outbreak in Washington, mail-in voting in the state likely played a major role in encouraging voter turnout despite the need to maintain social distancing. Turnout for its primary in 2020 was at 47 percent, up from 35 percent in 2016, though it’s worth noting that the primary that year was non-binding for Democrats (it took place after a state caucus vote).

As Vox’s Ella Nilsen has reported, there’s an effort by Sen. Ron Wyden (D-OR) to make vote-by-mail much more accessible ahead of the November general election, in case states are still facing challenges related to the coronavirus at that time. A bill that he’s proposed would enable all voters to get a mail-in ballot if 25 percent of states declare a state of emergency. It would also guarantee $500 million in federal funding that would be doled out to states attempting to implement these initiatives.

Currently, 34 states and Washington DC enable all voters to request an absentee ballot or vote by mail, Nilsen writes. The 16 other states, including Texas, New York, and Massachusetts, require an excuse for voters to use absentee ballots.

A reform that’s known for increasing access to the ballot box, vote-by-mail could well become more popular under the current circumstances.

RSVP now to join Susan Choi in talking Trust Exercise with the Vox Book Club
US deports 95-year-old Nazi camp guard who’d been living in New York for years
Talking about the Warren and Sanders handshake keeps us from having to talk about sexism
In defense of Twitter
Democrats are grappling with calls to “defund the police”
Vox Sentences: A huge victory for LGBTQ rights in India