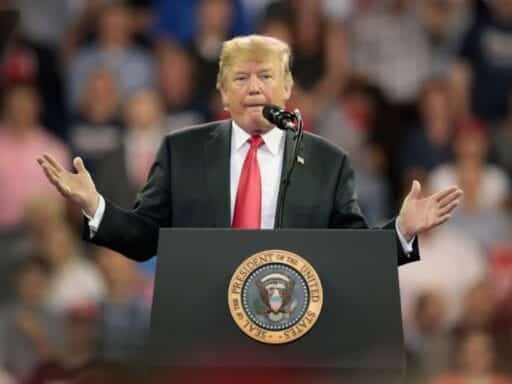 It’s also possible Trump doesn’t know what he agreed to.

President Donald Trump either doesn’t know what he agreed to with North Korean leader Kim Jong Un last week or he’s lying about it.

At a rally in Duluth, Minnesota, on Wednesday, Trump defended his decision to meet with Kim, bragging that he extracted a major concession from the dictator: “Sentence one says ‘a total denuclearization of North Korea,’” Trump said. “There will be denuclearization. So that’s the real story.”

His comment sparked massive cheers from the crowd. There’s just one problem: That’s not true.

Here’s what the first sentence of the agreement Trump and Kim signed last week actually says: “President Donald J. Trump of the United States of America and Chairman Kim Jong Un of the State Affairs Commission of the Democratic People’s Republic of Korea (DPRK) held a first, historic summit in Singapore on June 12, 2018.”

Okay, so Trump’s boast about it being the “first sentence” was clearly wrong. But let’s give him the benefit of the doubt and say he misspoke. What he was obviously trying to convey was that he got Kim to agree to completely dismantle his country’s nuclear program, and that it will eventually happen.

But South Korea doesn’t actually have its own nukes. What it does have, though, is what’s called the US “nuclear umbrella.” That basically means that the US promises to defend South Korea from the North — up to and including with the use of US nuclear weapons. There are 28,500 US troops currently stationed in South Korea to defend it from potential aggression from the North.

That is a very different thing from Kim committing to just unilaterally give up his entire nuclear arsenal while US troops remain in South Korea, where they could easily launch an invasion and takeover of North Korea the minute they surrender their nuclear weapons.

What’s worse, North Korea only promised to “work toward” that goal, not actually reach it. That leaves Kim a lot of room to wiggle out of this agreement if he wants to, something his country has done in past agreements.

It’s worth noting that earlier accords the US and North Korea signed were much stronger on the denuclearization issue. In 2005, North Korea said it was “committed to abandoning all nuclear weapons and existing nuclear programs.” That’s a much more specific commitment than Kim made this year.

It’s not surprising that something Trump said turned out to be false. But it’s very troubling if he is actually unaware of what he and Kim shook hands on.

If that’s the case, he may become disappointed and disenchanted with his diplomatic overtures to Kim. At that point, the threat of war becomes a real possibility once again.

#MeToo’s latest critics say they want to help the movement. Why are they shaming women?
Why anti-abortion groups are backing away from abortion bans
One Good Thing: This Chinese dance show is the only thing I care about
What banning abortion at 6 weeks really means
Biden thinks his new eviction moratorium may be doomed. Here’s why he’s trying it anyway.
Why a new law requiring Asian American history in schools is so significant