It took 11 months to restore power to Puerto Rico after Hurricane Maria. A similar crisis could happen again. 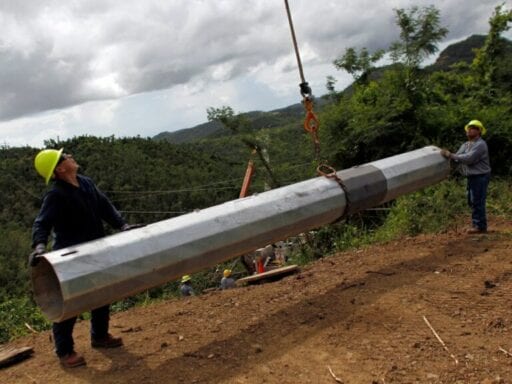 The government of Puerto Rico says it has restored power to the last neighborhood that lost electricity after Hurricane Maria — 328 days after the Category 4 storm hit the island.

On Tuesday, the Puerto Rico Electric Power Authority (PREPA) announced that it had finally reconnected all 1.5 million customers to the power grid, ending the largest blackout in US history and the second-largest blackout in the world. (Though some customers say the electricity is hardly reliable.)

“The work to restore power has been completed for our last customer; the residence of Charlie, Jazmín and their children in Bo Real Anón, Raíces sector, Ponce; thank you,” the company said Tuesday in a Twitter post, which included a photo of the lucky (or unlucky) family who was last to get electricity.

The announcement represents a major milestone in the long and painful process to restore electricity to Puerto Rico since Hurricane Maria destroyed the island in September. The storm wrecked most of the island’s fragile, ancient power grid and knocked down 80 percent of its power lines. The massive effort to restore electricity has been crippled by government incompetence, poor planning, and potentially illegal grid repair contracts.

The lack of reliable electricity had deadly consequences. Elderly people were unable to use essential medical equipment, such as respirators, and other couldn’t refrigerate drugs like insulin. The lack of electricity and basic public services has also triggered a suicide crisis on the island, and prompted thousands of families to move to the US mainland.

Researchers believe the lack of electricity was largely responsible for the surge of deaths reported in the hurricane’s aftermath. The government of Puerto Rico recently admitted that the official death count of 64 is way off, and that it’s probably closer to 1,427.

But even that estimate may undercount the hurricane’s real toll. In June, Harvard researchers estimated in the New England Journal of Medicine that up to 4,600 people likely died as a result of the storm. If that’s true, it would make Hurricane Maria the deadliest natural disaster to hit US soil in more than a century, ever since a hurricane hit Texas in 1900 and killed more than 6,000 people.

Restoring power is a long-awaited victory for Puerto Rico, but that doesn’t mean the island has a resilient power grid. Federal disaster aid from FEMA only pays for repairs to restore infrastructure to its previous state, not to upgrade it.

And Puerto Rico’s power grid desperately needed an upgrade. It was already a mess before the storm hit. PREPA had been putting off repairs for years as the island sank into a deep economic recession. It was also bankrupt and understaffed, as thousands of electrical workers have retired or moved to the US mainland in the past decade to find better jobs.

Hurricane Maria didn’t destroy the entire power grid, but it did knock down 80 percent of the island’s utility poles and all transmission lines. The Trump administration delayed sending crucial federal aid to Puerto Rico, and because Puerto Rico has been experiencing an economic recession since 2006, it didn’t have the money to start repairing the grid right away.

Instead, the head of PREPA at the time, Ricardo Ramos, signed two questionable contracts with little-known private American energy companies that required little payment upfront. Ramos planned to pay the rest of the contracts with reconstruction grants from FEMA.

The main energy contract never got that far. It was a massive $300 million deal with Whitefish Energy, a tiny Montana company that had two employees at the time.

The public backlash led Ramos to cancel the contract and resign from his job, and PREPA had to find a new contractor.

After that, the US Army Corps of Engineers was put in charge of overseeing the grid repair contracts with more experienced utility crews from the mainland. But the logistics were still a mess. Building and shipping thousands of utility poles and power lines to the island, then setting them up on mountainous terrain, was a headache for utility crews. And some of the equipment is so old that manufacturers had to make parts just to work for Puerto Rico’s system. That slowed everything down.

The Army Corps’ last estimate was to have 100 percent of customers hooked up to the grid by the end of May. That didn’t happen.

This week, PREPA’s helicopters arrived to install power lines and utility poles to the customers who waited the longest: families living in a rural, mountainous neighborhood outside the city of Ponce, in southern Puerto Rico.

A video published by El Nuevo Día newspaper showed members of one family crying, cheering and clapping as they turned on a lamp in their home for the first time in 11 months.

“Light, light, look, it’s light!” Jazmín Méndez yelled to her toddler, who seemed confused by the commotion. “We’ve been waiting for this moment, thank God.”

The Electoral College, explained
Sharp Objects’ most obvious suspect may not be the murderer, but she’s still dangerous
Black Lives Matter helped shape the 2020 election. The movement now has its eyes on Georgia.
Cats’ new trailer is here. It’s very Cats.
Trump’s approval rating is rising slightly amid the coronavirus pandemic
Poll: Mike Bloomberg is now in second place in the Democratic primary