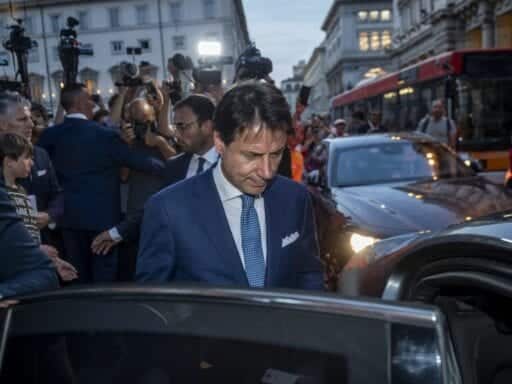 Italy is on the verge of forming a new government that leaves Salvini’s anti-immigrant Lega out of power — at least for now.

This month began with Italy’s right-wing, anti-immigrant, nationalist leader trying to take down his own government to position himself as the next prime minister — and may have just ended with him out of power and a more left-leaning government in charge.

It put a pause on Italy’s political crisis, which began a little more than a week ago when Prime Minister Giuseppe Conte resigned in the face of a no-confidence vote, collapsing the 14-month-old government.

Now two rival political parties have reached a deal to form a new coalition by Wednesday’s deadline and avoid elections — for now.

Italy’s center-left Democratic Party (PD) and the anti-establishment Five Star Movement will join forces to establish a new government, retaining the independent Conte as prime minister. This pushed the right-wing Lega party — and its charismatic and popular leader Matteo Salvini — into the opposition.

It’s not a done deal yet, and there’s still a chance this could all fall apart before Italian President Sergio Mattarella gives the formal mandate to Conte Thursday morning. But it appears as though Italy is about to end some of the uncertainty and confusion that has prevailed since last week.

The new government, if it happens, could stay in power until 2023, when the next elections are scheduled. But the PD and the Five Star Movement had to overcome their longstanding political enmity to form this coalition, so it’s still a bit of wait-and-see for how long (or even if) they can work together and retain control in Italy’s volatile political landscape.

“In difficult times like these, shunning our responsibility to have the courage to try this is something we cannot afford,” Nicola Zingaretti, the leader of the PD, said Wednesday.

The biggest loser, at least in the short term, is Salvini, who largely orchestrated this crisis. He was the deputy prime minister in the increasingly strained coalition between the Five Star Movement and his anti-immigrant Lega party. But Salvini had been angling for weeks for snap elections, in the hopes that his rising popularity and success in May’s European Parliament elections would give him enough support that he could become prime minister outright after a new vote, or maybe with the support of smaller right-wing and far-right parties.

But Salvini’s plans went awry when Conte decided to step aside, frustrating Salvini’s power play and bringing down the government with his resignation.

The Five Star Movement also wasn’t about to reengage with Lega and Salvini, who’d just betrayed the party for his own gain, so that basically left them to work out a pact with the center-left PD (the opposition party in the old government) or face potentially tough elections. The Five Star Movement has seen its popularity slip relative to Lega, and faced the prospect of losing power altogether in a vote.

Still, the new government is a marriage of necessity, and may be just as fragile a government as the one that preceded it. What’s more, neither the Five Star Movement nor the PD is as popular as Salvini’s Lega, meaning their democratic mandate is perhaps even more precarious.

Salvini remains a pretty potent figure right now, and he can still frustrate Italian politics from the outside — maybe even more so, as this is sure to rally his populist, nationalist base. Responding to the developments on Wednesday, Salvini basically said that if he had to wait a little longer to win, so be it.

Salvini’s ability to execute his anti-immigrant policies may be curtailed, and he’s temporarily hobbled by his miscalculation. But he’s become a force in Italy. He’s not disappearing from the (beach) scene anytime soon.

Shooting at Jacksonville, Florida video game tournament: What we know so far
Alex Trebek’s last episode of Jeopardy will air on Christmas Day
After decades of women’s rights gains, why are women less happy?
12 things everyone needs to know about the coronavirus pandemic
The more money you make, the more fast food you eat
Elizabeth Warren raised five times as much money from Big Tech as Joe Biden did