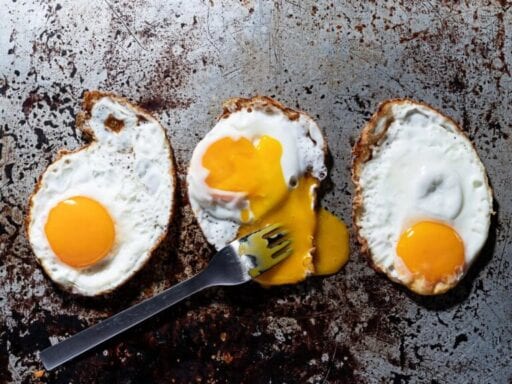 It’s Thanksgiving time. A lot of Americans are thinking about food. But a lot of them are also thinking about a diet — a diet that is much more than a diet. It’s a lifestyle. It’s a culture. It’s keto. Ketosis is this Holy Grail fat-burning state that people on the ketogenic diet quest after, explains Vox senior health reporter Julia Belluz.

The ultra-high fat, low-carb diet has you eating things like eggs, bacon, avocados, steak, and vegetables and staying away from items like fruits, bread, pasta, pizza, and birthday cake, Julia says on this episode of Today, Explained. “People on the keto diet get about 5 percent of their calories from carbs, 15 percent from protein, and around 80 percent from fats.”

Some scientists say the keto trend sweeping the nation could help fight epilepsy and cancer, too. Listen to the full episode of Today, Explained — Vox’s daily explainer podcast — to hear Julia separate fat from fiction. Here’s a lightly edited transcript of her conversation with host Sean Rameswaram.

Where did this come from? Was this like the Atkins diet where there’s some dude who just said, “Here’s an idea”? Is there a Mr. Keto?

There’s no one figurehead. And it is sort of a repackaging of the Atkins diet. It’s sort of like this streamlined Marie Kondo version of Atkins. … Where he had this multi-phase plan and you eventually reincorporated carbs, with keto you just cut all that out and you stay that way and you live that way.

I sometimes see promotions for this diet on social media. Is keto big on the ’Gram? Is it big with the influencers?

Yeah, I think it’s this combination of things, so some communities that are quite influential in the diet and exercise space embraced it, like Cross Fitters. There are celebrities in Hollywood like Halle Berry, Kourtney Kardashian. Silicon Valley has glommed on to it, people like Tim Ferriss. There’s an ex-Jersey Shore character who has this massive Twitter following and Instagram following. He’s called Vinny Guadagnino: The Keto Guido.

[Keto] taps into the market of men who have often been forgotten in this diet space. So when you think about Weight Watchers, right? It’s something that middle age-ish suburban moms are doing. I don’t know if this is all sexist. But then with keto it’s sort of, it’s meat heavy. It’s something you can do by yourself. You can quantify whether you’re on the diet so it has this interesting self-quantification aspect.

It’s data driven. You can buy breathalyzers, pee strips that you pee on and they tell you, wow, basically, yeah, whether you’re in ketosis or not. And there’s blood tests as well.

How does it work? What are you measuring with these urine and blood tests?

You’re just measuring the ketone levels in your body. When we’re eating the typical high-carb diet, our bodies are fueled primarily by glucose or blood sugar. So when we eat a bagel or a peach at lunch, the glucose levels in our blood rise and the pancreas secretes insulin to turn glucose into a usable energy source, so it’s able to move the glucose from the blood into our cells.

But our body didn’t evolve to actually keep glucose on storage so we just get it basically after we eat. There’s no long-lasting glucose stores around our body. So, if we stop eating carbs, our body has this amazing ability to adapt to whatever else we’re putting in there and turn that into a usable energy source.

It’s kind of like you think about our bodies like flex-fuel vehicles. They can sort of adapt to whatever we’re putting in them.

Exactly. One of those adaptations is this process called ketogenesis. And when we’re in ketogenesis, the liver starts to break fat down both from the food we’re eating and from the fat that’s stored in our body into this usable energy source called ketone bodies, or ketones for short. And basically ketones can stand in as glucose for fuel when we’re not eating carbs.

Just to break it down again: On the high-carb diet you eat carbs like pasta or bread, your glucose levels rise, the pancreas secretes insulin and then the insulin moves the glucose into our cells to power our body. On the keto diet, a person eats fats like steak and eggs. The glucose and insulin levels in the body fall. The liver converts the fat into ketones and then the ketones fuel the cells and tissues of the body. You’re making the body find a way to use fat as a source of fuel.

Is there another way to get the body into ketogenesis?

Starvation. When you fast — think about it again, our bodies don’t have glucose stored up anywhere. When you’re not eating, it has to turn to fat stores to start to get energy to keep going. That’s part of the reason people can survive for as long as 73 days without food, because we start to just use the fat stores in our body and we can keep going.

If the body thinks this is kind of like itself starving or it’s similar to that, does this actually work for obesity? I don’t believe Vinnie’s photos where he’s all of a sudden got like a beautifully-carved six-pack out there on the streets. But does this help reduce obesity? Could this be, like, a potential cure to America’s obesity epidemic, which I hear is pretty bad, right?

The obesity epidemic is serious and Vinnie’s abs are probably attributed to more than the keto diet. He’s probably been to CrossFit. And the data we have so far suggest keto performs a lot like basically every other diet. There are some people who see tremendous success. There are some people who just absolutely miserably fail and maybe even gain weight on the diet. On average, most people will lose a few pounds but have a tough time sticking to it in the long run.

But keto does have this real potential as a treatment for a few diseases. And that’s the really serious and fascinating scientific exploration that’s happening right now.

Listen to the full episode of Today, Explained to learn more about the science behind the keto diet.

The cult of Sally Rooney
How a New Hampshire libertarian utopia was foiled by bears
One Good Thing: Try reading “A Child’s Christmas in Wales” out loud
The danger of mythologizing America’s “heartland”
Cori Bush wants to be the next progressive to upset a sitting congressman. Today’s her shot.
The mythology behind the Tiger King’s country music