It’s been a year since 20,000 Google employees walked off the job. And they’re madder than ever. 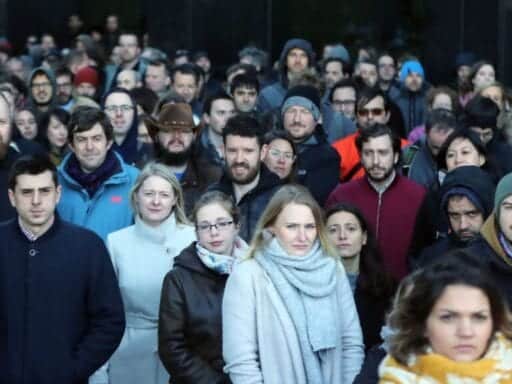 The search giant’s workers have become more political and critical, and they show no signs of quieting down — despite management’s efforts to rein in the debate.

A year ago, 20,000 Google employees made history when they walked out of work to protest how the company had protected and paid nearly $100 million to high-powered Google executives accused of sexual misconduct toward employees.

The company apologized for its wrongs, changed some of its policies related to sexual harassment, and promised to make it simpler for its employees to report misconduct. But a year later, many employees say the company has only superficially reformed. They say employees are still retaliated against after reporting their bosses for bad behavior, and that overall the trust between the company and the rank-and-file has deteriorated.

But the walkout accomplished something else: Today, Google employees are more willing than ever to be openly critical of leadership — even on controversial issues such as immigration and unionization — and they know they will have a loud chorus of support on their side. Despite Google’s attempts to move on, employee dissent on issues ranging from controversial government contracts to business in China remains a big, and growing, problem for the company.

“The cynic in me says, ‘almost none of the walkout demands were met.’ On the other hand, you could say, ‘look at how woke everybody is now,’” one employee told Recode. “Our organizing meetings are getting big enough that we’re running out of chairs.”

Just last week, employees in Zurich defied management to hold a meeting on unionization that Google had unsuccessfully attempted to cancel, as Recode first reported. A few days later, employees in the US expressed outrage — both internally at an all-hands and to the press — over a report that Miles Taylor, a recent Google public policy leadership hire, had advocated for the president’s family separation policy and the Muslim travel ban during his time working at the Department of Homeland Security. And last Wednesday, employees publicly accused the company of using a browser extension to spy on employees who are internally organizing. The string of events is a glaring reminder of the lack of trust between Google’s workers and its leaders.

Last week, Google CEO Sundar Pichai addressed that strained work culture in the company’s weekly all-hands known as TGIF. Pichai said, “We are genuinely struggling with some issues” and said that he “tries to understand when I feel there is something which caused breaking of trust and see what we can do to improve,” per the Washington Post, which published leaked audio of the meeting. (At that meeting, Pichai and other execs bemoaned recent leaks to the press, arguing that they’re harmful for the company.)

“I think [the walkout] got a lot of people to become more aware of how bad things are, and got those people to be more interested,” one employee told Recode. “People are thinking of things under a more critical light than they used to. … When management says a meeting on labor rights in Switzerland is canceled, they say, ‘Hey, we deserve an explanation,’ and, ‘What are they trying to hide? Originally I didn’t care, but now I want to go to this talk.’”

Meanwhile, management has tried to quell the dissent and its associated issues by cracking down on Google’s famously open work culture. This summer, the company restricted speech on internal platforms by revising its community guidelines to discourage political debate. The company argues that it’s necessary to moderate an overly permissive culture that has become untenable for a firm with over 100,000 workers. Adding to the company’s problems, a few former employees have claimed they were fired for sharing their conservative political beliefs at work, and they have garnered support from Trump and other powerful Republicans who accuse the company (without any evidence) of having anti-conservative bias baked into its products.

But many employees say the new restrictions are too broad and aggressive. They see them as an attempt to stifle workers’ ability to challenge management. Just last week, ahead of its weekly all-hands meeting, BuzzFeed News reported that Google deleted a question an employee had asked about the hiring of Miles Taylor, the former Trump administration staffer. A source familiar with Google said the question was deleted because it was an attack on the employee — it asked why the company hired someone who “dehumanize[s] marginalized groups” — and that Google leadership answered other questions on the matter that the company viewed as more respectful. But many employees considered it a legitimate question about Google’s hiring practices.

As one employee described it to Recode, about half of the company has moved on from the walkout and is going about their daily business. But the other half is a larger and more politically engaged group than ever before, and they are carefully watching management’s every move.

“There’s a continued drumbeat of scandals and failures of accountability and transparency and realizing how much power tech companies have — it’s those things that have kept worker activism alive,” said a Google employee who spoke on the condition of anonymity.

Recode spoke with several current and former Google employees, including four of the seven organizers of the walkout, who all said that a year later, Google still hasn’t addressed many of the core issues that led to the historic protest.

Employees made five demands during the walkout, but Google hasn’t acted on most of them, including having employee representation on the company’s board and sharing detailed salary information on the gender, race, and ethnicity compensation gap among employees. And while the company has made efforts to simplify the process for reporting issues like sexual harassment, dozens of Google employees told Recode earlier this year that they are continuing to face retaliation when they report harassment and other workplace issues. Four of the walkout organizers left the company and two of them have publicly accused the company of retaliating against them for their political organizing around these issues. (Google denies this.)

“Reporting misconduct takes courage and we want to provide care and support to people who raise concerns,” wrote Google’s Vice President of People Operations, Eileen Naughton, in a statement to Recode. “All instances of inappropriate conduct reported to us are investigated rigorously, and over the past year we have simplified how employees can raise concerns and provided more transparency into the investigations process at Google. We work to be extremely transparent about how we handle complaints and the action we take.”

“I was thrilled when that change happened, but I think that for us, these changes only happened because we’re persistently demanding them,” said Tanuja Gupta, an organizer of the walkout and Google Program Manager who still works for the company. Gupta has been advocating for an end to the practice across industries. “The minute we take our foot off the gas, that could stop — it’s very easy to get complacent.”

Gupta and others within the company, organizing as part of a group called Googlers for Ending Forced Arbitration, are pushing for the company to extend the ban on forced arbitration to the contracts that govern Google’s temp, vendor, and contracted workers, or TVCs, who make up over half of the company’s total workforce. These workers are often paid less and don’t get all the same benefits as full-time employees. A spokesperson for Google said the company doesn’t mandate this largely because it trusts its contractors to govern their own employment terms.

According to several Google employees, regularly scheduled on-campus meetings where workers discuss issues are growing week by week in several Google offices. The strength of these meetings and the increased chatter about unionization is in large part what led to the suspicion that Google management had introduced a browser extension tool to track employee behavior in an attempt to monitor and stifle these attempts, according to several sources.

A Google spokesperson denied that the tool was meant to surveil organizers, saying that it was rolled out to reduce calendar spam and that workers have misunderstood it. Still, many Googlers continue to raise suspicions about the extension, sharing information internally about the code behind it and the extent of its capabilities.

All this employee dissent has led to a significant development at the company: successful unionization votes.

A group of tech-skilled Google contractors for the company HCL who work in Google’s Pittsburgh office, who say they were in part inspired by the walkout, recently voted to form a union. The HCL workers at Google were the first white-collar workers — a historically difficult group to organize — to unionize.

The Google walkout was bigger than Google.

One year later, it has changed the culture of not only Google but the tech industry as a whole. Since the walkout, workers at several other major tech companies, including Amazon, Microsoft, Facebook, and Palantir, have all publicly criticized their companies over policies ranging from selling technology that helps detain and deport immigrants to building social media platforms that enable the spread of political misinformation.

And many of them, like the hundreds of Amazon employees who last month joined a global climate strike to protest their company’s environmental practices, say they were directly inspired by the walkout.

“I think that what we’ve seen is the widespread growth of something that is shaping up to be a formidable movement,” said Meredith Whittaker, a former longtime Google employee and walkout organizer who co-founded the AI Now Institute, a research organization for studying the impact of AI on social science. “People are saying, not only do I not want to be exploited at work, I refuse to contribute to harm outside of work. I refuse to build artificial intelligence for a military drone program. I refuse to work for the JEDI project.”

The walkout has also had the effect of opening up tech companies’ internal cultures, some of which are notoriously secretive and close-knit. Just last week, 250 employees at Facebook — a company whose CEO last year made it his public mission to find and fire leakers — signed a letter shared with the New York Times that openly criticized how the company allows politicians to run false ads.

If even Facebook employees are willing to speak out, it seems as though the pact of secrecy that shrouds the tech world is cracking and that the Google walkout provided tech employees a model for how to do that.

“One of the legacies from the Google walkout was how we leveraged the press to tell our story in a way that gave the company no choice but to respond,” wrote Erica Anderson, a former Google employee and walkout organizer (Anderson now works for Vox), in an email to Recode. “As a tech employee, you know that going to the press is a cardinal sin,” she wrote. But workers knew that “internal conversations would take us nowhere new, so we went straight to journalists to help tell this story. This gave organizers and those we represented great leverage.”

Another employee who helped organize the walkouts, Amr Gaber, who still works at Google, told Recode that activism in tech has “gotten past the point of no return.”

“The biggest legacy [of the walkout] is the culture shift of people realizing they can be active agents in their own destinies instead of just passive subjects of the powers that be.”

Disclosure: Erica Anderson was one of the organizers of the Google walkout and has worked at Vox Media as an executive producer for Recode’s Kara Swisher since January 2019.