It’s Kirsten Dunst vs. a pyramid scheme in her capitalism-skewering new Showtime series 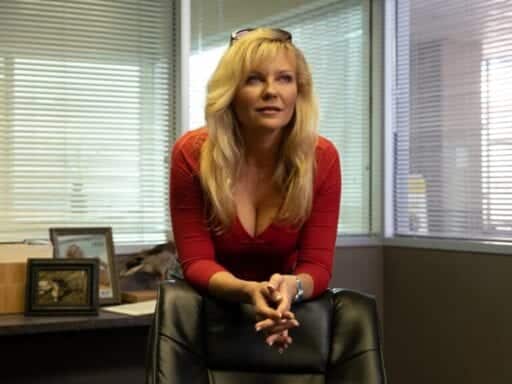 Share
Loading...
Kirsten Dunst plays a woman forced to work for a multilevel marketing company she doesn’t particularly like in On Becoming a God in Central Florida. | Showtime

On Becoming a God in Central Florida is great when it’s great and still pretty good when it’s bad.

On Becoming a God in Central Florida, Showtime’s new Kirsten Dunst vehicle, has a relationship to the films of the Coen brothers that’s similar to the one between something like Mr. Robot and the films of David Fincher and Stanley Kubrick. It’s not a pastiche, not exactly, but if you asked 10 film fans, “What feeling does this show seem like it’s going for?” nine of them would immediately mention the brothers behind Fargo, The Big Lebowski, and No Country for Old Men.

This isn’t necessarily a bad thing, mind. Mr. Robot is keen to showcase its influences, but it blends them together with a very 2010s sense of political and economic collapse to create something that is distinctly its own.

Likewise, On Becoming a God in Central Florida (which premieres Sunday, August 25) combines the American milieu of the time period in which it’s set — the “history is over and western capitalism won!” hubris of the 1990s — with the “is this a comedy or a drama?” tonal oddness of the Coen movies of the same era (which include Fargo and The Big Lebowski). Add in some of the darkly comic crime shenanigans of Elmore Leonard’s neo-noir novels set in Florida — another seeming influence — and you have a potent brew.

The show loses its way a bit across the course of its first season; I’ve seen all 10 of it, and I was never quite sure precisely what story it was trying to tell. But I find the Coens comparison useful. The pair makes lots of movies about people who delude themselves into doing reckless or even illegal things, based on the belief that they deserve something good because America lied to them. On Becoming a God in Central Florida is that, but with one of Kirsten Dunst’s finest performances and a water park.

Dunst plays Krystal Stubbs, a lower-middle-class wife and mother who learns, after an unlikely tragedy, that she’s in a substantial amount of debt to FAM, a multilevel marketing organization that amounts to the very real company Amway with the serial numbers filed off.

As with Amway, a major question surrounding whether FAM is a legitimate company or a pyramid scheme has to do with whether the products it sells have any actual value or are just cheap junk. FAM exists mainly to sell useless products to its many vendors, who in turn try to sell those products to people just a little bit worse off than they are. It’s a nebulously legal ploy to profit off the poor and give to the rich, and the only folks who benefit are those at the tippy top of the pyramid (here represented by Ted Levine as Obie Garbeau, a mustachioed cowboy type who wouldn’t feel out of place in The Big Lebowski).

Krystal has no great love for FAM, but she’s also so in hock to the company that the only way out is through. So she throws herself into selling its products with clear eyes (she knows most of the stuff is crap) and the kind of gusto that only a former beauty queen who once imagined a brighter future for herself can muster. She tells herself she’s building something better for her family, but the nature of FAM means that she essentially has to bilk her closest friends and lure them into a position she knows might well bankrupt them. To play the game is to lose everything, even when you win.

That last sentence is a pretty great summation of unchecked capitalism to begin with, and On Becoming a God in Central Florida isn’t shy about pointing out all of the ways FAM might just be a microcosm of the country that gave birth to it.

What’s more, the show is interested in how the casual sexism and racism of the American dream Krystal grew up with only serves to perversely keep feeding its own ends. Krystal’s ideas — good ones! — are frequently written off because she’s a woman and the men around her cannot imagine viewing the world through her perspective. But to prove that her ideas are good means further feeding and enriching the beast that would otherwise dismiss her entirely, a catch-22 that plenty of people who aren’t cisgender straight white men have found themselves in throughout American history. To become her most profitable self, she must also become her worst self.

On Becoming a God in Central Florida veers wildly between fundamentally comedic scenes (especially those involving Krystal’s main point of contact with FAM, a tryhard failson named Cody, played by Théodore Pellerin) and deeply tragic ones (especially those involving Krystal’s neighbor Ernie, played by Mel Rodriguez, who gets further and further enmeshed in Krystal’s scheming but doesn’t have her innate savvy).

The show doesn’t always seem particularly well-balanced in this regard, and several sequences throughout the first season that tilt toward dreamy surreality have a touch of flopsweat to them, as if the show’s writers’ room (headed up by creators Robert Funke and Matt Lutsky) had a really cool idea for something that would be visually stunning but couldn’t figure out a way to guide their story organically toward those points. (With that said, when these sequences work — as with a montage blending tooth horror, waterslides, and Jesus Christ Superstar in the second episode — they really pay off.)

And the season’s pacing is downright bizarre. Showtime has released the first two episodes of On Becoming a God in Central Florida for free on YouTube, and that’s likely because it takes Krystal both of those episodes to end up in the place you expect her to end up in: working for FAM. Then the middle hours of the season are much stronger, but as it concludes, it awkwardly pivots to setting up for a second season, as if it had never previously considered the possibility.

But even when the show is veering all over the place, Dunst is there to hold it together. Unfairly pigeonholed as a love interest for too much of her career, Dunst has always been best at playing black-hearted schemers. Even as a child, she made Little Women’s Amy March feel like a sociopath in waiting.

Now, less concerned with movie stardom, she’s made a series of bold choices over the last 10 years, and On Becoming a God in Central Florida is one of the boldest. She’s a dirtbag as sponsored by Glamour Shots, and it’s always a wonder to see her smile and realize her mouth isn’t filled with shark’s teeth. Not everything about this series works, but everything about its lead performance does. And for a first season, that’s more than enough.

On Becoming a God in Central Florida debuts Sunday at 10 pm Eastern on Showtime.

New York is suing Amazon over pandemic labor conditions
2020, in 7 minutes
The federal agency that’s supposed to protect workers is toothless on Covid-19
America’s emergency medical stockpile is almost empty. Nobody knows what happens next.
Morocco and Israel plan to normalize ties. Trump changed US policy to make it happen.
Why Facebook is “the front line in fighting hate today”