“It’s not going to create or take away a single job”: Why Trump’s excuse on the Saudis doesn’t hold up 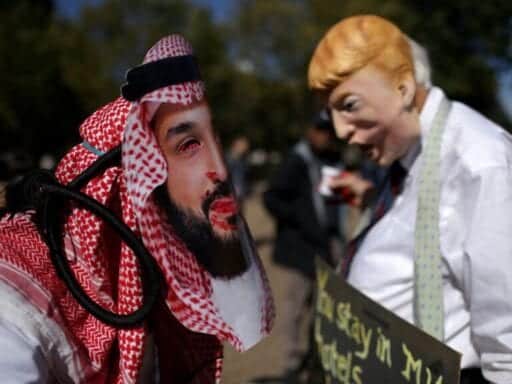 There are a lot of reasons for Trump to avoid punishing the Saudis. Jobs aren’t one of them.

When President Donald Trump explained over the past two weeks why he was reluctant to damage the relationship between the US and Saudi Arabia over the the disappearance and murder of dissident journalist Jamal Khashoggi, he kept coming back to one reason: jobs.

“I don’t want to hurt jobs,” Trump said in an interview with 60 Minutes aired last weekend, explaining that there are “other ways of punishing.”

“I’d rather keep the million jobs, and I’d find another solution,” he said at a defense roundtable in Arizona on Friday.

But while there are a multitude of reasons Trump might be hesitant to condemn the Saudi Arabian government, tens or hundreds of thousands of jobs from an arms deal with the Saudi government isn’t one of them — at least a legitimate one.

The White House has been conspicuously cautious in its reaction to Khashoggi’s disappearance, even after on Friday the government admitted he was killed inside the Saudi consulate in Istanbul earlier this month. Part of Trump’s explanation — beyond that it’s unfair to consider Saudi Crown Prince Mohammed bin Salman “guilty before proven innocent” — is that a $110 billion arms deal would be at risk. Trump claims that arms deal will lead to thousands of jobs, and it’s a risk that he’s not willing to take.

But as with so many of Trump’s claims, the situation is not what it seems. Much of that $110 billion deal, which Trump and Saudis announced in May 2017, was negotiated under the Obama administration, and much of what was put forth at the time were letters of intent and interest, but not contracts. Thus far, Saudi Arabia has only gone through with letters of offer and acceptance for $14.5 billion in purchases, according to CNN.

While Boeing, Lockheed Martin, Raytheon, and other defense companies would certainly like to make and keep deals with the Saudis, they’re not the end-all, be-all for them, financially. The much more important client and jobs supporter: the United States government.

“There’s been an over-selling of where things stand today,” Derek Chollet, executive vice president at think tank the German Marshall Fund and who held foreign policy positions under the Obama and Clinton administrations, told me. “The Saudis are a big customer, but I don’t see this as significant leverage against the United States.”

There could also be other economic reasons leading Trump to avoid destabilizing the relationship — including Saudi influence over the world’s supply of oil, which would be particularly crucial if the US imposes sanctions on Iran.

President Trump has a penchant for exaggeration, including when it comes to this Saudi arms deal.

When MBS visited Trump at the White House earlier this year, Trump held up a map indicating that pending arms deals would lead to 40,000 US jobs (there was no source for that estimate). But since then, Trump’s upped his claims by more than tenfold, saying that he doesn’t want to cancel the deal in light of Khashoggi’s murder because it would lead to 500,000, 600,000 jobs, or even one million jobs.

Vox’s Alexia Fernández Campbell recently dove in on Trump’s jobs claims to try to figure out what’s actually going on. Her findings:

Overall, the private US defense industry does directly employ a lot of US workers — about 355,500 in 2016, according to the most the recent estimates from the Aerospace Industries Association. But private-sector defense workers make up less than 0.5 percent of the total US labor force, and that includes every person whose job depends directly on the sale or production of airplanes, tanks, bombs, and services for the entire US military. It’s unlikely that many of them, if any, depend directly on weapons sales to Saudi Arabia, and its also unlikely that those jobs would vanish if Saudi money disappeared.

“It’s not going to create or take away a single job I don’t think,” Jim Corridore, directors of industrials research at research and investment firm CFRA Research, told me. “There are other homes for these products should these deals fall through.”

Companies have been distancing themselves from Saudi Arabia in the wake of Khashoggi’s disappearance, but as the New York Times notes, plenty of money is still flowing.

Corridore said even if the US or defense companies slow down contract agreements for a bit, it will likely only be until the dust settles around the current controversy. “The most likely scenario is a short-term delay in these deals where we say we’re not going to do them, time goes by, reforms are made, and the deals are made,” he said.

The Saudis could potentially go to Russia and China to try to make other weapons deals, and that could potentially be problematic later down the line for future sales, because equipment from those countries can’t communicate with equipment made by companies in the US — sort of how Macs and PCs used to work. But the experts I spoke with said that risk is limited and still not much leverage for the Saudis.

Even so, again, the jobs estimates Trump is putting out are “tremendously overblown,” said Andrew Miller, deputy director for policy at the Project on Middle East Democracy who served on the National Security Council under Obama. And it’s not just Trump who is likely overstating the importance of the deals to jobs — it’s likely the companies, too.

The Saudi government’s oil card could make Trump nervous, but it’s not the end of the world.

Even if the jobs claims are overblown, though, there are other economic factors that could make Trump leery of endangering the US-Saudi relationship, including oil prices.

But, like the jobs claims, fears about Saudi Arabia’s influence on the price of oil might be inflated. The answer could be, in part, oil, but it’s complicated.

Saudi Arabia is a founding member of OPEC and has, historically, been able to exert a lot of control over oil markets and prices worldwide. They can push oil prices higher and lower by changing outputs or, sometimes, even just considering it.

“What’s at stake is global oil price stability,” Ashley Peterson, a senior oil market analyst at energy advisory firm Stratas Advisers, told me. “Saudi Arabia excels at talking up and talking down the oil market. They could theoretically cause enough trouble just by hypothetically running scenarios out loud versus physically changing their flows.”

Peterson told me that the US gets about 10 to 11 percent of crude oil imports from Saudi Arabia, and most of that goes to a refinery that Saudi Arabia owns. It couldn’t engineer a repeat of the 1970s oil embargo that caused global calamity. And, in fact, it could wind up hurting itself more than anyone.

If the Saudis were to cut production, the US now has the ability to ramp up its production, and it would actually become more economically viable for US producers, including frackers, to do so as oil prices go up. If they were to flood the market, American producers are better able to handle low oil prices than the Saudis.

“They have the oil card and the arms sales card, neither of which, to me, is particularly compelling in these circumstances,” Chollet, from the German Marshall Fund, said.

Trump, who has spent much of his presidency boasting about the strength of the economy, obviously would rather not see oil prices going up in the US, especially ahead of the midterms. But in the long run, the US would be able to react, and he shouldn’t need to worry.

So what is it then?

Beyond the economic factors in play here, there are also geopolitical considerations — it also goes into the broader context of the Trump administration’s decision to withdraw from the Iran deal.

As the New York Times’ David Sanger pointed out, Saudi Arabia is an important player in the United States’ plan to go after Iran. The White House is hoping the Saudis will help it keep oil pries from spiking when it reimposes sanctions on Iran, including cutting off Iranian oil exports. Per Sanger:

If that carefully coordinated plan moves forward, the Saudis would likely see a significant increase in oil revenue at exactly the moment Congress is talking about penalizing the kingdom over the Khashoggi case. It is one reason that Secretary of State Mike Pompeo was sent, with a few hours’ notice, to see King Salman of Saudi Arabia and Crown Prince Mohammed bin Salman on Tuesday.

“There’s a concern that cutting off Iranian oil will be disastrous for European economies,” Miller said. “The Trump administration had asked [the Saudis] to increase production to compensate for Iranian oil. It’s clear that that’s another one of the factors they’re considering in their response to Khashoggi’s murder.”

To be sure, this is a situation where the Trump administration is the creator of its problem: it did not have to drop out of the Iran deal in the first place.

“If they hadn’t done that, then there would be no concern about losing Iranian oil production internationally,” Miller said. “In seeking to indulge the preferences and the policy interests of US regional allies, that has actually reduced our room for flexibility rather than building our influence over those actors.”

There’s no way to know exactly why Trump appears so hesitant to act aggressively on Saudi Arabia and MBS, and there are a number of potential factors in play. Trump has some financial and business ties to Saudi Arabia. He’s touted his relationship with them and the arms deal. His son-in-law and adviser, Jared Kushner, has reportedly told Trump to back MBS and has a close relationship with the crown prince.

What’s more, Trump seems to like dealing with the Saudi government, and there’s an affinity between the two sides. “In many ways, the House of Trump is very familiar to the House of Saud and vice versa,” Chollet said, referring to Saudi Arabia’s ruling royal family.

Acknowledging MBS isn’t the best ally could also be, for Trump, admitting he was wrong. And apologies aren’t something the president is a fan of. But if he lets Saudi Arabia off the hook, he’s only opening the door for further problems later down the line. “How much of the indulgence of him give him a sense that he could get away with something like this?” Chollet asked.

Why the policing problem isn’t about “a few bad apples”
A post-debate focus group of undecided voters shows that Kamala Harris faces an uphill battle
The surprisingly close Michigan Senate race, explained
Watch the first-ever video of pigs using tools with no human prompting
Some sage advice for Donald Trump about picking a fight with Bob Woodward, from Donald Trump
Why a manual by a control freak is the best thing to read when the world is out of control