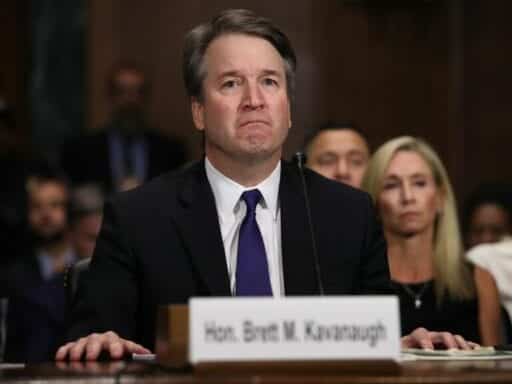 The incredibly narrow vote underscores how partisan his confirmation is.

The Senate on Saturday voted 50-48 to confirm Brett Kavanaugh to the Supreme Court. It’s among the closest votes on a Supreme Court nominee in the history of our country, and it underscores just how divided this whole process has been.

There were two party defectors: Sens. Lisa Murkowski (R-AK), who wanted to vote “no” but instead voted “present” so that her colleague could attend his daughter’s wedding; and Joe Manchin (D-WV), who voted in favor.

Now that Kavanaugh is on the Court, the effects of this vote will reverberate for decades. In the near term, it also sends a painful message about the current state of partisan rancor — and the entrenched unwillingness to believe women who come forward about sexual assault.

Many things stood out about Kavanaugh’s confirmation process. It was exceedingly polarizing and marred by Republicans — and the White House — withholding thousands of documents from Kavanaugh’s time working in the George W. Bush administration. It was rushed through by a Senate majority leader who wanted him confirmed before the midterm elections next month, even though he’d previously held up an Obama administration nominee for nearly a year. It was tainted by repeated instances of Kavanaugh misleading lawmakers about everything from his involvement in Bush-era detainee policy to his own drinking habits, while under oath.

At the end of the day, however, what this vote will truly be defined by is whether senators believed the word of multiple women. And as the final vote on Kavanaugh suggests, they simply didn’t.

In the era of #MeToo, many have reflected on the 1991 Anita Hill hearings when she levied sexual harassment claims against Clarence Thomas only to see him confirmed for the high court anyway. Long before Kavanaugh had ever been nominated for the Court, some argued that something like that couldn’t possibly happen again.

Since he was nominated by President Trump in July, Kavanaugh has been about as divisive as a nominee can get. Poll after poll has shown him as the most unpopular Supreme Court nominee to get picked in decades. A September Quinnipiac poll found that 42 percent of people were opposed to his confirmation. That number spiked to nearly 50 percent following the hearings last week with him and Christine Blasey Ford, who has accused him of sexually assaulting her while both were in high school.

Part of this polarization stemmed from the role that Kavanaugh occupies in history: As the fifth conservative justice on the Court and the replacement for Anthony Kennedy, a conservative who sometimes sided with the liberal bloc, he could theoretically be the deciding vote in overturning landmark decisions like Roe v. Wade. As a result, Democrats had made stopping him one of their chief goals ever since he was nominated — something Republicans have been quick to point out to suggest that their problems with Kavanaugh aren’t so much targeted as they are blanket attacks.

And to some extent, Republicans had a point. Kavanaugh has, in fact, been backed by the Federalist Society and the Heritage Foundation, but his track record on the issues of abortion rights and health care doesn’t offer an explicit indication of how he would rule on such topics.

“There has also been considerable focus on the future of abortion rights based on the concern that Judge Kavanaugh would seek to overturn Roe v. Wade. Protecting this right is important to me,” said Sen. Susan Collins (R-ME) in a floor speech on Friday, where she argued that she believed he was not the threat to abortion rights that Democrats and activists have made him out to be. “To my knowledge, Judge Kavanaugh is the first Supreme Court nominee to express the view that precedent is not merely a practice and tradition, but rooted in Article 3 of our Constitution itself.”

Nevertheless, the entire process was shrouded in partisan tension, further amplified by the way Republican lawmakers have handled requests for his records. In addition to his 12 years on the DC Circuit, Kavanaugh spent a number of years working for the George W. Bush administration, where he produced a lengthy paper trail. Before he was nominated, Republicans worried that combing through all of these documents could significantly slow Kavanaugh’s confirmation process, so they opted for an expedited — and unorthodox — route.

Rather than wait for the National Archives to complete its review, Republicans worked with Bill Burck, a personal attorney for George W. Bush as well as for White House counsel Don McGahn, to conduct a parallel process, an approach that appeared riddled with conflicts of interest.

It was against this backdrop — and a heightened degree of enmity between the two parties — that sexual assault allegations against Kavanaugh first emerged.

If Democrats and Republicans were already at odds, the sexual misconduct allegations that were brought by Ford, Deborah Ramirez, and Julie Swetnick only further exacerbated these divides. An already split Congress, representing an already split country, quickly became even more polarized.

While Ford’s allegations were at the center of this firestorm, both parties did their best to try to make it about attacks on the other side. Republicans suggested that Democrats handled Ford’s claims improperly and leaked them to the press, while Democrats slammed Republicans for rushing through the consideration of such a sensitive matter.

A letter from Ford was first shared with Sen. Dianne Feinstein, the top Democrat on the Judiciary Committee, in July. Feinstein only disclosed more details about it to the committee after Kavanaugh’s confirmation hearing had already concluded in September — at which point, information about the letter made it to the press.

Republicans weren’t happy with how all of this went down and found the timing exceedingly suspicious — calling it a last-ditch effort to block Kavanaugh’s nomination. Feinstein, meanwhile, said she was simply trying to protect Ford’s identity and was not involved with disclosing it to the press. Even after Ford herself came forward, however, Republicans suggested that she was merely a “pawn” being leveraged by the Democrats, who had nowhere else to turn in their bid to stop Kavanaugh.

Ford’s Senate testimony overall marked a searing turning point in the confirmation process. It underscored many of the existing differences between the two parties — but it also unearthed a well of pain that exists among men and women across the country.

Ford had argued that she wasn’t sure if it was worthwhile to come forward if Kavanaugh was basically a shoo-in for confirmation anyway. “Why suffer through the annihilation if it’s not going to matter?” she told the Washington Post. Kavanaugh, meanwhile, characterized the emergence of these allegations as nothing more than a partisan smear and a plot hatched to attain “revenge on behalf of the Clintons.”

Even though Kavanaugh did, in fact, get confirmed, Ford did much more than just testify against Kavanaugh in her hearing appearance. By speaking so publicly about one of the most harrowing experiences she’s gone through, she made it okay for men and women everywhere to talk about their own experiences with assault, incidents that many said they hadn’t revisited or spoken about in decades.

“She is putting herself out there, knowing they’re going to try to excoriate her and she’s doing it because she knows this is an important matter,” Sen. Kamala Harris (D-CA) said in a CBS interview. “She has the courage to come forward; she has nothing to gain.”

Ford’s decision to speak up, it turns out, proved contagious.

What Kavanaugh’s confirmation means for the midterms

Polling is still ongoing about the kind of impact Kavanaugh’s confirmation will have on the November 6 midterm elections, but some early results suggest that it’s fired up voters in both the Democratic and Republican bases — spurring GOP enthusiasm that had been seemingly waning before.

“Does this fire up Republicans in a way they have not been engaged yet? I just think this is a moving target right now,” Cook Political Report’s Jennifer Duffy told Vox’s Ella Nilsen. “The ultimate outcome may drive turnout in one way or another.”

As the logic goes, Republican voters may have taken GOP lawmakers’ arguments very much to heart, and perceive the Kavanaugh allegations as a Hail Mary attempt by Democrats to smear a qualified candidate for the Supreme Court. That outrage could translate to higher turnout and more votes.

An NPR/PBS NewsHour/ Marist Poll from this week found that Republicans saw a significant bump in midterm enthusiasm in the wake of the Ford-Kavanaugh hearing. Previously, Democrats had a roughly 10 percent enthusiasm advantage compared to Republicans, and post-hearing, that narrowed to 2 percent. The National Republican Congressional Committee, a campaign arm for the GOP, also reported that it had seen sizable boosts in its fundraising figures as the Kavanaugh confirmation process has progressed. On the other hand, now that he’s confirmed, that enthusiasm on the Republican side could evaporate.

Democrats were already fired up about this year’s midterms, and the activism and opposition toward Kavanaugh’s nomination only exacerbated it. This anger could further boost existing enthusiasm among the party’s voters — especially women.

One thing is for certain: Kavanaugh’s confirmation has marked a new level in an accelerating divide between Republicans and Democrats. We won’t have to wait long to see who is the angriest.

SNL brings back Alec Baldwin’s Donald Trump to give the Covid-19 graduation speech no one wanted
President Biden’s international restoration project has begun
What’s next for Mueller’s investigation after Manafort’s conviction?
Low-income immigrants are afraid to seek health care amid the Covid-19 pandemic
The many ways we know 2020 will be a banner year for voting
Ginsburg’s Supreme Court colleagues celebrate her legacy as a “hero” for justice