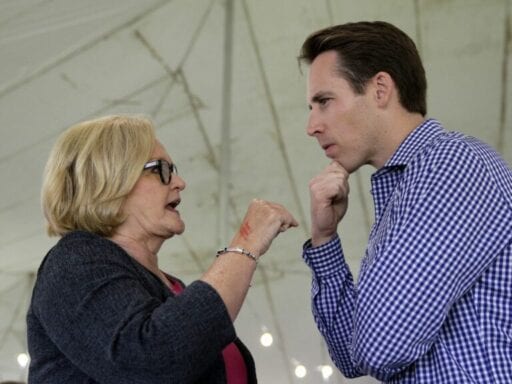 Hawley and McCaskill are essentially tied in the polls.

Hawley and McCaskill handily won their primaries Tuesday, as expected, setting up what will be one of the most competitive midterm races this fall. McCaskill, one of 10 Democrats who represent a state that went for Donald Trump, is among the most vulnerable incumbents in 2018. Trump won Missouri by 20 points in 2016, and McCaskill and Hawley have been neck and neck in the polls all year.

McCaskill has become something of a white whale for Republicans in Missouri. She rode into office on the Democratic wave in 2006 and managed to keep her seat in 2012 after her Republican challenger Todd Akin came under fire for bizarre comments on abortion, including a reference to what he called “legitimate rape” victims.

This year, the Republican Party handpicked Hawley to unseat her.

The 38-year-old Missouri attorney general is a staunch conservative who has managed to keep a relatively low political profile, as Vox’s Ella Nilsen reported, other than a recent comment where he linked the sexual liberation movement in the 1960s and ’70s and sex trafficking at a religious conference. Republicans, hoping to avoid another Akin situation, saw Hawley — a Stanford and Yale grad — as a clean contender.

The state’s Republican Party has already put its full weight behind the Republican nominee. In a break with norms, the state GOP allowed the Republican National Committee to spend money backing Hawley’s campaign before he’d even won the primary.

So far, the biggest cloud over Hawley’s campaign has been Missouri’s scandal-plagued former Republican Gov. Eric Greitens, who stepped down at the end of May. That was more than a month after a state report found that Greitens had coerced his hairdresser into nonconsensual sex acts and took nude photos of her as blackmail. Hawley, who tried to distance himself from Greitens, no longer has to worry about allegations against the former governor hindering his campaign.

But Hawley’s low profile and easy road to the nomination have already rankled the state’s conservative base. Politico reported that donors and activists in Missouri have been unimpressed with Hawley’s “sluggish” fundraising:

At a time when Republicans across the country are struggling to excite their base, Hawley’s absenteeism has infuriated the conservative activists and organizers whose support he badly needs. And it has rankled top Republicans in Washington who are concerned that he’s needlessly providing an opening to McCaskill, a deeply vulnerable incumbent who skated to reelection against a weak Republican opponent in 2012 — and who, they fret, may be lucking out again.

By mid-July, Hawley had $2.3 million in cash on hand, a mere third of McCaskill’s war chest.

Months before the general election, Hawley is already on the attack, going after McCaskill for standing with her party so far against Brett Kavanaugh’s Supreme Court nomination and painting her as too liberal for the state.

With the primary out of the way, the race is on.

How slavery became America’s first big business
2 Trump allies in the House demand an investigation into Rod Rosenstein
There is no anti-lockdown protest movement
You’re never too old for trick-or-treating
Joe Biden has a plan for that
Joe Biden and Elizabeth Warren walked away with the most speaking time during the third Democratic d...