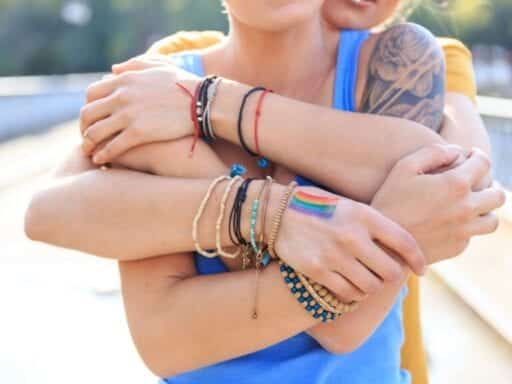 The interventions doctors recommend for kids who want to transition medically are completely safe and reversible.

Alex was born with male anatomy. She grew up knowing she was “supposed to be a boy,” but as a young child, she never felt like that gender fit. When she hit puberty, she became anxious and depressed about how her body was becoming more masculine. She started dressing in gender-neutral clothing and wearing makeup, and was happy when strangers perceived her as a girl.

In ninth grade, she took on a female name and came out as transgender to her friends at boarding school. She started going to a therapist, who diagnosed her with gender dysphoria. At 15, she asked to transition, and her parents, though reluctant, brought her to the Boston Children’s Hospital Gender Management Service, where she started a puberty-blocking medication. She was prescribed estrogen pills about a year later to help her go through female puberty.

After four months on the hormonal medications, she decided she did not identify as female but rather as gender nonbinary (neither male nor female) and would use the gender-neutral pronouns they, them, and theirs. At this point, they also stopped the medications and went through male puberty.

Alex, whose case I described recently in the journal JAMA Pediatrics with two other Harvard physicians, has no regrets about taking the hormones. Though the hormones left Alex with some cosmetic changes — redistribution of body hair and fat — Alex says they were necessary to fully solidify their gender identity. (Their name was changed to protect their privacy.)

As a doctor and researcher who studies the mental health of transgender youth, I was alarmed to learn that the Trump administration is planning to invalidate the experiences of transgender people by defining gender based on a person’s genitalia at birth. This comes in the midst of a flurry of media stories about transgender youth who choose to stop hormone therapies, ranging from a cover story in the Atlantic to more heavy-handed pieces from conservative writers and pundits who have painted a picture of crazed liberal doctors irreversibly “mutilating” the bodies of confused children.

The reality could not be further from the truth.

The vast majority of transgender kids who begin hormonal treatments do not change their minds about medically transitioning. For the very small percentage who do, like Alex, this isn’t the horrible outcome that conservative media outlets lead people to believe. Sometimes “de-transitioning” is just part of a person’s healthy psychological development.

How likely is your transgender child to change their mind?

Before parents let their children start hormone therapies, they often want to know how likely their child is to later change their mind about medically transitioning. The answer depends on if their child has hit puberty.

For adolescents who have reached the earliest stages of puberty, the odds are very low. A large study of transgender adolescents from the Netherlands found that only 1.9 percent of those who hit puberty and start puberty blockers decide to stop treatment like Alex did.

There is more debate around how likely prepubescent children are to later not identify as transgender. For this reason, they are not offered hormone therapies. They also, by definition, have not yet started puberty, and thus there is no puberty to block and no need for hormone therapy.

Parents should not panic about reversible interventions for transgender youth

It’s possible that many prepubescent transgender children will, in fact, change their minds about transitioning medically. We don’t have great research to know.

Luckily, the interventions that doctors would recommend for kids this young are completely safe and reversible. Medical guidelines advise that prepubescent children not be offered any hormonal interventions. What a psychologist or psychiatrist might recommend is allowing the child to “socially transition” if the child so desires.

A social transition may involve the child taking on a new name or new pronouns, or wearing stereotypical gendered clothing. Mostly, it means not placing restrictions on how your child wants to express their gender. A social transition is, of course, completely reversible, and not inherently dangerous.

Early studies have shown that transgender youth who are allowed to socially transition have mental health nearly indistinguishable from their cisgender peers (a stark contrast to past studies of transgender youth who weren’t allowed to socially transition who had high levels of anxiety and depression). If a child stops identifying as transgender at this stage, they simply go back to the pronouns, dress, etc. of their gender assigned at birth.

Again, if a child has hit puberty and identifies as transgender, they are much less likely to later stop identifying as transgender. At this stage, a doctor may offer a “puberty blocker.” These medications temporarily stop puberty from progressing, allowing the adolescent more time to explore and understand their gender identity. (It’s very helpful for the adolescent to be in psychotherapy during this time to navigate these decisions.)

Puberty blockers like Lupron are approved by the Food and Drug Administration and have been used for decades for precocious puberty, a condition in which very young children go through puberty too early. The only significant side effect is that the adolescent may fall behind on bone density. For this reason, doctors will regularly check bone density while the patient is on the medication. If the medication is stopped, bone density catches up to normal after a few years as the child goes through the puberty of their gender assigned at birth.

Alternatively, if an adolescent continues to identify as transgender and starts on gender-affirming hormones like estrogen or testosterone down the line, this will also catch them up on bone density. The great thing about puberty blockers is that if you stop them, puberty will progress as if the medication were never started. Parents can think of a puberty blocker as buying their children more time to figure out their gender identity without going through puberty.

Gender-affirming hormones like estrogen and testosterone are bigger decisions. They are generally not prescribed until a patient is 16 (though they can be prescribed as early as 14 in select clear-cut cases). They will cause body changes that are not easily reversed, like body fat redistribution and changes in body hair. Adolescents should be counseled extensively before starting these medications.

Parents should also remember, however, that these changes are mostly cosmetic. The potential benefits from gender-affirming hormones (improved mental health) will usually outweigh the low risk of an adolescent later changing their mind and regretting cosmetic changes. This risk-benefit analysis should be carefully discussed in therapy before these drugs are started.

Every decision in medicine involves weighing risks and benefits. Lipitor, a medicine doctors use to prevent stroke, also increases the risk of rhabdomyolysis, a condition of muscle breakdown that can damage the kidneys. However, the potential benefit of preventing stroke far outweighs the potential risk of this unlikely event.

The same is true for transgender youth and gender-affirming care. Will a small number change their minds about medically transitioning? Yes. Does this mean we should withhold a treatment that has a high likelihood to provide a big mental health benefit? No.

Jack Turban is a resident physician in child and adolescent psychiatry at Massachusetts General Hospital and McLean Hospital. His research focuses on the mental health of transgender and gender diverse youth.

The White House’s top Ukraine official confirms there was a quid pro quo
Exclusive: Trump’s travel ban is supposed to make exceptions for worthy cases. A new lawsuit alleges...
Trevor Noah’s feud with France over race, identity, and Africa — explained
No officers charged with killing Breonna Taylor
Last week was a disaster for voting rights in the courts
The Westing Game is a kid’s book that respects you enough to tell you Uncle Sam is a liar