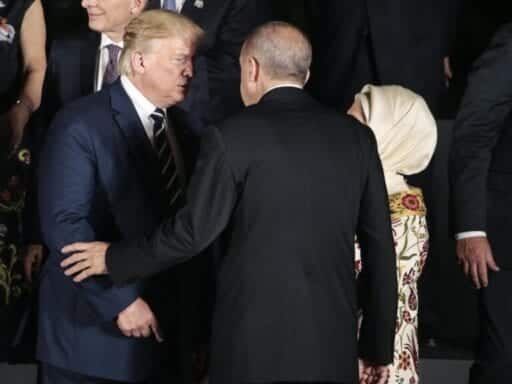 The House should be asking questions about Trump’s dealings with Turkey, Russia, Saudi Arabia, and others.

Holding up authorized military aid to Ukraine in an effort to coerce the Ukrainian government into smearing Joe Biden and validating an absurd conspiracy theory that aims to exonerate Russia for 2016 election interference is a perfectly impeachable offense.

In that sense, the desire of House Democrats to avoid confusing the issue by turning their impeachment inquiry into a sprawling investigation or a comprehensive accounting of Donald Trump’s crimes is understandable. And certainly if Senate Republicans indicate that they are prepared to hold Trump accountable swiftly in exchange for Democrats agreeing to move swiftly so that the country can move on, Democrats should do the responsible thing and remove Trump from office ASAP.

But there’s no indication that’s happening. Instead, among Republicans, only Sen. Mitt Romney has spoken about Trump’s misconduct with any degree of clarity, and even Romney hasn’t said he necessarily deems the total subversion of American foreign policy to be an impeachable offense.

If Republicans are going to stand by Trump regardless, there is absolutely no reason to cut the impeachment inquiry short or artificially limit its scope. The volume of leaks coming out of the Trump White House sometimes creates the impression that we have visibility into what’s really happening there. The moral of the Ukraine story is that isn’t true. A whistleblower’s memo brought new facts to light that were previously being covered-up. And the memo itself was nearly covered-up. The launching of the formal inquiry has brought forth fruitful testimony from government officials who were apparently planning to stay silent otherwise.

It’s certainly possible that Trump’s corrupt dealings with Ukraine is the only example of him doing dirty deals with foreign leaders. But it’s also quite possible it’s just the only example we happen to know about. What we know for sure is that there are other call records that have been inappropriately kept on a super-classified server in order to shield their contents from other people in the government. Unless Republicans start showing some immediate interest in removal over Ukraine it would be political malpractice to not look into what’s happening during Trump’s calls with leaders of countries like Turkey, Russia, and Saudi Arabia.

There’s a lot of smoke around Trump and Turkey

The other major political story this fall relates to Trump’s precipitous abandonment of America’s Kurdish allies in Syria, part of a deal the president struck with Turkey that does not appear to have any upside for the United States. Both Democrats and Republicans in Congress criticized this move, the military was against it, Israel was alarmed, and basically nobody can tell exactly why this happened.

According to a “news analysis” story by David Sanger in the New York Times, “Trump Followed His Gut on Syria,” and the disastrous fallout just represents a failure to think things through.

That’s certainly possible. Trump is impulsive, and sometimes he does things rashly for no real reason. But one lesson of the Ukraine story is to remind us that Trump is also a pretty wily character who is perfectly capable of forming and executing fairly elaborate plans in secret. We also learned that neither Trump nor his inner circle respects the distinction between a diplomatic deal that aims to advance American interests and a deal that aims to advance Trump’s personal interests.

Given that his arrangement with Turkey had no clear upside for the United States, it’s natural to ask whether it had upside for Trump personally. Sanger reported, citing “the generous description of a senior American diplomat” that the decision sprung from an “off-script moment” during a call between Trump and Turkish President Recep Tayyip Erdogan.

But rather than take an anonymous source’s word for it, Congress ought to investigate — demanding testimony from officials who work on Syria policy and access to the White House record of the call. It’s a natural extension of the Ukraine inquiry not just thematically, but because of the specific involvement of Rudy Giuliani. He’s a central figure in the Ukraine scandal, but we’ve also learned in recent weeks that his key partners on Ukraine work were criminals, and that a Turkish bank is being indicted for working with one of Giuliani’s clients to evade sanctions on Iran. It also came out earlier this month that Trump, who is normally very hawkish on Iran, asked Rex Tillerson to get the Justice Department to drop the earlier criminal charges against Giuliani’s client.

Giuliani was also a vehement proponent of the idea that Fethullah Gulen, a Turkish cleric who’s lived for years in Pennsylvania, should be deported to Turkey. So vehement that White House officials wondered if Giuliani wasn’t illegally working as an unregistered foreign agent of the Turkish government. That’s a good question. It turns out, of course, that former National Security Adviser Michael Flynn was doing just that.

Trump also has murky business dealings in Turkey himself.

Thank you Prime Minister Erdogan for joining us yesterday to celebrate the launch of #TrumpTowers Istanbul!

But while we already have a broad picture of Trump’s relationship with Turkey — he admires Erdogan’s authoritarian side, he does favors for him over the advice of everyone in his government, he surrounds himself with criminals who work for the Turkish government, etc. — we don’t have what the impeachment inquiry is giving us about Ukraine, a granular account of what specifically is going on.

We have learned a lot of interesting and important details from the congressional testimony of people like former Trump aide Fiona Hill, and Ukraine envoy William Taylor.

But we’ve also learned an important second-order fact: Both Hill and Taylor knew that inappropriate stuff was going on, both objected to it at the time it was happening, but both apparently planned to keep quiet about it indefinitely until Congress asked them to testify. It turns out that there are a lot of people in the government operating somewhere between whistleblowing and stonewalling.

These are often career government officials who believe in the professionalism of not spilling the beans. Or else, like Hill and Taylor, they’re paid-up members of the conservative foreign policy establishment who try to keep things on track relative to Trump’s freelancing but also don’t particularly want to be seen sabotaging the president.

Whatever their exact motives, the point is that saying there is an impeachment inquiry and it is calling you to testify turns out to work. It doesn’t work magically — plenty of witnesses are still refusing to cooperate, and Congress is going to have to consider flexing its muscles and trying to sanction non-cooperators more severely. But some key witnesses have, in fact, cooperated. If the inquiry expands, it will likely turn out that there are other people who know where the bodies are buried and are willing to talk.

Turkey has been in the news lately, but Trump’s misconduct in dealings with Ukraine is clearly related to the larger subject of his fishy relationship with Russian President Vladimir Putin.

One of Trump’s goals in withholding aid money was to smear Joe Biden, which while an egregious abuse of power at least makes some kind of basic political sense. His other goal, however, was to get Ukraine to validate a baroque conspiracy theory whose point is to say that it was a previous Ukrainian government — rather than the government of Russia — that hacked the DNC emails back in 2016, and then framed Russia for the crime.

That goal is strange because the theory makes no sense, but (like with the Kurdish sellout) there’s also no clear reason why Trump is working overtime to help Russia. Obviously, the list of suspicious Russia-related activities from Trump is long, and includes the apparent obstruction of justice detailed in the Mueller report. After Mueller’s public testimony turned out to be a bust, House leaders were clearly eager to drop the subject. But the Zelensky call offers a new avenue of inquiry, and the revelation that call records are being improperly stored on a highly secret server creates a specific thing to look into.

By the same token, Trump keeps breaking with bipartisan sentiment in congress to defend Saudi Arabia — three of his four vetoes as president have been about this. The public message on this is that he does it for the same of American defense contractors whose Saudi contracts he doesn’t want to imperil.

And maybe that’s all there is to it, but we’ve also known for a long time now that Trump conducts diplomacy with Saudi Arabia through irregular channels overseen by his son-in-law. There’s no particularly clear reason why you would do things that way, and congress should ask whether Trump is really the selfless defender of arms dealers’ profits that he portrays himself as or is he cutting himself in on the deal.

Having spent 2018 promising to hold Trump accountable if they won power, Democrats then spent most of 2019 soft-pedaling oversight out of fear of being stampeded by their own base into impeaching Trump. For better or worse, however, they are now clearly impeaching Trump. And the process of doing so is bearing fruit in terms of hurting Trump’s approval rating and bringing new information to light.

The reasonable response is to press forward and ask a wider set of questions about Trump’s potentially corrupt dealings with a bigger set of foreign leaders.

Why the government makes it hard for Americans to get unemployment benefits
Trump’s latest tweet about coronavirus testing is like a greatest hits of his favorite lies
A power struggle over Tripoli threatens to push Libya further into chaos
Stormy Daniels' interview with Michael Cohen prosecutors canceled, Daniels' lawyer says
Michael Cohen says he arranged hush money payments “at the direction of” Trump
A 17-year-old has been charged with 30 felonies over the big celebrity Twitter hack