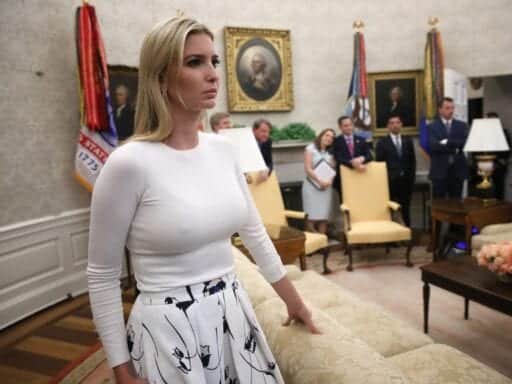 The first daughter waited until after her dad was done separating families at the border to say it was a bad idea.

Ivanka Trump has finally decided to speak out about her father’s administration’s practice of separating families at the US-Mexico border — after her dad signed an executive order axing it.

Trump had remained conspicuously silent about the federal government’s “zero tolerance” policy in stopping asylum seekers and immigrants at the US border, which resulted in thousands of children being separated from their parents. The self-avowed advocate for women and children said absolutely nothing about the matter in public as the outrage grew, instead snapping fun family photos and fundraising for Republicans.

She reportedly discouraged her father from the policy behind closed doors, but to the outside world she said nothing — that is, until the coast was clear and family separation had been ended.

Minutes after President Donald Trump signed an executive order on Wednesday stopping the administration’s practice of separating families at the border, Ivanka Trump reappeared on Twitter to praise her father’s decision. Before that, she hadn’t tweeted in five days.

“Thank you @POTUS for taking critical action ending family separation at our border,” she wrote — failing to acknowledge it was her father’s policy that caused the problem in the first place. She called on Congress to find a “lasting solution” that is “consistent with our shared values.” It’s not clear what that means.

Thank you @POTUS for taking critical action ending family separation at our border. Congress must now act + find a lasting solution that is consistent with our shared values;the same values that so many come here seeking as they endeavor to create a better life for their families

Ivanka Trump, a top adviser to the president, was supposed to be a voice for children and family issues in the administration. But as the family separation crisis unfolded, she was nowhere to be found.

Trump, 36, spent Monday attending a pair of fundraising events with White House Majority Leader Kevin McCarthy in California, pulling in $3.1 million in two events, according to Politico’s Playbook. On Tuesday, the White House told CNN that Trump met with her father to discuss “images of families being separated at the US-Mexico border” and put in a few phone calls with Congress. President Trump also said during a meeting with GOP lawmakers Tuesday evening that Ivanka had encouraged him to stop separating families.

But publicly, Ivanka said nothing about the matter until her father had put an end to it. And it’s not like she wasn’t active on social media.

Her Twitter account fired off a handful of generic messages before going radio silent after June 15, celebrating the US’s successful bid for the World Cup in 2026, touting women’s responsible borrowing habits, and quoting a Chinese proverb.

Some of Trump’s social media activity celebrated the closeness of her family in a way critics have called tone-deaf: a birthday wish to her father, a Father’s Day salute to her husband and her dad, a picture of her holding her son.

Happy Father’s Day to my love! Thank you for being such an incredible dad (and husband!). We love you #FathersDay

The firestorm over TBS host Samantha Bee’s description of Ivanka as a “feckless cunt” was during a segment on Ivanka’s inaction on her father’s immigration policies. Specifically, the comedian was referring to an Instagram photo Trump posted of herself with one of her children, apparently oblivious to the broader context around her.

“You know, Ivanka, that’s a beautiful photo of you and your child,” Bee said as a photo flashed onto the screen, “but let me just say, one mother to another: Do something about your dad’s immigration practices, you feckless cunt! He listens to you!”

The myth of Ivanka as a moderating force

There has long been a perception that Ivanka is some sort of “moderating force” to her father and that she and Kushner serve as voices of reason within the White House. But there’s little evidence to actually back up that claim.

Ivanka and Jared are often nowhere to be found during big moments in the Trump presidency. They were skiing when his first Obamacare repeal push floundered. While the president was defending racists in Charlottesville, Virginia, they were on vacation in Vermont. They didn’t keep Trump from pulling out of the Paris climate agreement. They didn’t get him to moderate his Charlottesville stance or stop him from scrapping the Deferred Action for Childhood Arrivals program.

During protests against Trump’s travel ban, Ivanka posted on Instagram a picture of herself and Jared dressed up to go to a party.

The first daughter told the Financial Times in September that some people have created “unrealistic expectations” for her power in the White House. “That my presence in and of itself would carry so much weight with my father that he would abandon his core values and the agenda that the American people voted for when they elected him,” she said.

On plenty of matters, Trump has been with her father — including on items that are supposed to be part of her pro-women, pro-children platform. She backed Trump’s move to get rid of an Obama-era initiative meant to close the gender pay gap in August. After the school shooting in Parkland, Florida, she said arming teachers with guns is “an idea that needs to be discussed.”

In a subsequent interview with CBS News, Trump responded to the sketch, saying that if being complicit is “wanting to be a force for good,” then she is. “I don’t know what it means to be complicit, but you know, I hope time will prove that I have done a good job and, much more importantly, that my father’s administration is the success that I know it will be,” she said.

I exchanged emails with two White House representatives asking about Ivanka Trump’s stance on family separation and her activities on Tuesday and received no answers. I reached out before the executive order and, again, heard nothing.

Ivanka Trump has a habit of toggling between the role of distant first daughter and shrewd policy adviser, depending on when it’s convenient for her.

In a February interview with NBC News’s Peter Alexander, she scolded the interviewer for asking about the multiple women who have accused her father of sexual harassment and assault. She said it was a “pretty inappropriate question to ask a daughter.”

During the same interview, she discussed the relationship between the US and North Korea. White House Chief of Staff John Kelly reportedly griped around the same time that Trump seemed to be “playing government.”

The best case to explain her silence in recent days is that she was oblivious. It wouldn’t be the first time she’s been accused of being tone deaf. She and her husband snapped smiling pictures at the opening of the US Embassy in Jerusalem last month as violence erupted just miles away. In January, she attempted to piggyback on Oprah Winfrey’s Golden Globes speech and join in on #MeToo and Time’s Up.

Still, even first lady Melania Trump weighed in on the family separation matter before the executive order, in a statement from her spokesperson saying she “hates” to see parents separated from their children and calling for a country that “governs with heart.”

The first lady said “both sides” need to come together for a fix, apparently siding with her husband’s false assertion that Democrats are at fault for what’s happening, in one of her rare statements on public policy.

It’s still more than Ivanka — the supposed advocate for children and families — did. At least before it was politically convenient.

Trump’s coronavirus speech was laced with xenophobia
Read the full transcript of the Helsinki press conference
Vox’s newest show Glad You Asked launches on YouTube October 8
Scientists feared unstoppable emissions from melting permafrost. They may have already started.
Who is going to win Super Tuesday, according to the polls
Exclusive: Pompeo told North Korea to cut its nuclear arsenal by 60 to 70 percent