J.K. Rowling’s Cormoran Strike books are the next best thing to a grown-up Harry Potter 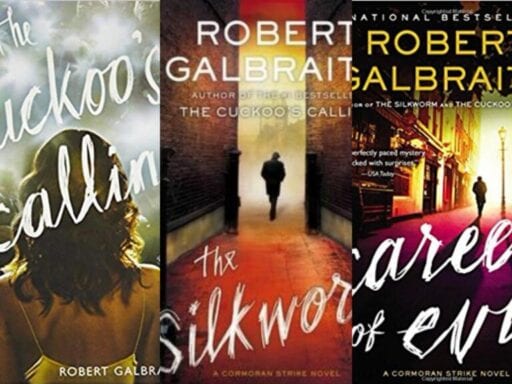 For the generation who grew up with Harry Potter, part of the joy of J.K. Rowling’s seven-book saga was getting to age with the characters.

I was 8 when Sorcerer’s Stone came out in the US 20 years ago, and I was in college when Harry Potter and the Deathly Hallows came out in 2007. Rowling’s characters were with me for every milestone of my childhood and adolescence — so when Rowling began to publish novels for adults in 2012, when I was 23, I was delighted. I could experience adulthood with Rowling’s characters the way I had experienced adolescence. It felt like fate.

That 2012 novel was The Casual Vacancy, which is in all honesty not a very good book. It’s gritty and literary in a self-conscious way; there’s a description of a used condom lying outside “like a slug” that reads as very, “That’s right, I said CONDOM, this is a world with SEX in it, sorry to BLOW YOUR MINDS.”

Like the Harry Potter books, The Casual Vacancy is doorstopper-length, but unlike the Harry Potter books, it lacks narrative tension: The book’s central question is how to fill a vacant council seat in a small and close-minded village after the former occupant’s death. The death is entirely natural; the election is petty and uninteresting; the characters are all secretly terrible in a flat and dutiful sort of way. There is no murder and no magic anywhere. This book is a snooze, and what’s worse, it’s striving desperately to feel important.

The Casual Vacancy effectively dulled my appetite for grownup books from J.K. Rowling. Maybe, I thought, she was only good at her one thing, and that was fine; she’d written one of the most popular series of books in the world, so she had nothing to prove, and after all I would always have the Harry Potter books. A year went by without any whisper of a new novel from Rowling, and I didn’t especially want one.

Then, in 2013, the news broke: There was a new J.K. Rowling book out, a book for grownups, and it had been out for months without anyone knowing it. And for me, that book and the series that followed would become the closest thing there was to a Harry Potter series for adults.

When The Cuckoo’s Calling came out in May of 2015, it languished in gentle obscurity for months. It was critically admired — described as “scintillating” and “sparkling,” so “instantly compelling” that “it’s hard to believe this is a debut novel” — but it sold only 1,500 copies in the UK. The market was not, it seemed, clamoring for gritty noir detective novels by an ex-British Army officer named Robert Galbraith.

Then, in July of 2015, an anonymous figure tweeted a tip to Sunday Times of London columnist India Knight. Knight had tweeted about how much she was enjoying the novel, and the tipster wrote, “Written by JK Rowling. … It’s her pseudonym – promise its true.”

Times arts editor Richard Brooks decided to investigate the tip. “I said, ‘Nobody who was in the Army and now works in civilian security could write a book as good as this,’” he told the New York Times. He sent the book to two independent linguistics computer experts, who found multiple similarities between Cuckoo’s Calling, The Casual Vacancy, and Harry Potter and the Deathly Hallows, and he found that The Cuckoo’s Calling and The Casual Vacancy shared both an agent and an editor.

At last Brooks sent his suspicions along to the publisher, and they confirmed everything. Robert Galbraith was J.K. Rowling, they said, and no one at her publishing house had known who she was when they accepted the book. The anonymous tipster, it developed, was a friend of the wife of the lawyer who handled the deal.

“I hoped to keep this secret a little longer,” Rowling said in a statement. “Being Robert Galbraith has been such a liberating experience! It has been wonderful to publish without hype or expectation and pure pleasure to get feedback from publishers and readers under a different name.”

That pure pleasure shows. The Casual Vacancy is a slog, but the three published Robert Galbraith books are playful in a way that the first few Harry Potter books are playful: They giddily romp their way through gritty, sordid murder mysteries, unabashedly reveling in the tortured cool-guy mystique of detective Cormoran Strike.

I don’t know J.K. Rowling, but I know she loves Cormoran Strike

Strike is a Humphrey Bogart-ish noir detective (he’s nearly always right, nearly always unflappable, and nearly always the coolest person in the room), put through the mildest of Everyman filters (but also he is fat). That characterization informs the pleasure of reading the Robert Galbraith books, much of which comes from watching Strike be cooler and smarter than everyone around him, even as he fights against his own inner demons.

Strike is attractively traumatized. He is a war hero: He used to be in the Royal Military Police, but he lost half his leg in Afghanistan. He is cursed with fame he never sought: His father was a rock star, and his now-dead mother a famous “supergroupie,” so while Strike barely knows his father, he is constantly subjected to the public interest in his background. He is unlucky in love, trapped in a toxic on-again-off-again relationship with a wealthy and beautiful college girlfriend while women all around him swoon at his feet. And he has a clear soulmate in Robin, the assistant who gradually becomes a fully fledged partner over the course of the first three novels.

And Rowling clearly loves Strike. There’s a palpable affection to the way she writes Strike cooly and precisely making his way through an investigation, to the way she writes him lost in flashbacks to his terrible childhood, to the way she has everyone else gasp whenever he delivers another sick burn or finds the single telling detail that will crack the case wide open. Her love for Strike is part of what makes the books feel so playful and so fun and free. She’s not dutifully writing about terrible people whom she hates, as she was in Casual Vacancy, but about an aspirational hero she can adore without judgment.

What’s striking about reading the Cormoran Strike books after having grown up on Harry Potter is how close Rowling’s affection for Strike feels to her affection to Harry. They’re both survivors traumatized by war — Strike by the war in Afghanistan, Harry by the wizarding war into which he was born — and both bear their trauma in the form of physical scars.

They are cursed by their fame and neglected by those closest to them, and they compensate by developing a strong sarcastic streak and a distaste for authority. And most importantly, they are always the ones who can see that something is wrong when no one else can, who can find the single hidden detail that makes everything, finally and at last, make sense.

Missouri approves Medicaid expansion ballot initiative, extending coverage to 200,000 people
DACA is in a state of legal limbo. Now a Texas judge might rule to kill it.
Purdue Pharma, maker of OxyContin, files for bankruptcy
Vox Sentences: A bombing suspect is in custody, but questions remain
The best 70€ I ever spent: An old German sideboard
What will shopping look like?