J.K. Rowling’s transphobia is a product of British culture 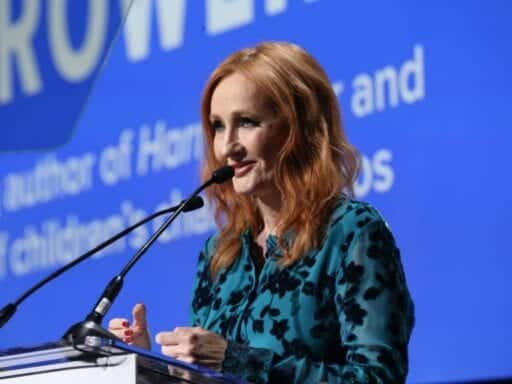 Her “gender critical” tweet on Thursday shouldn’t be surprising.

There’s been speculation for years within the transgender community that best-selling author J.K. Rowling, who wrote the Harry Potter series, held transphobic views. Now a tweet posted on Thursday morning has seemingly confirmed those suspicions.

In the tweet, Rowling expressed support for Maya Forstater, a researcher and self-proclaimed “gender critical” feminist whose contract was not renewed after her employer, an international think tank that campaigns against poverty and inequality, discovered her involvement in anti-trans campaigns online.

“Dress however you please,” Rowling wrote. “Call yourself whatever you like. Sleep with any consenting adult who’ll have you. Live your best life in peace and security. But force women out of their jobs for stating that sex is real? #IStandWithMaya #ThisIsNotADrill.”

Dress however you please.
Call yourself whatever you like.
Sleep with any consenting adult who’ll have you.
Live your best life in peace and security.
But force women out of their jobs for stating that sex is real? #IStandWithMaya #ThisIsNotADrill

The tweet drew immediate criticism from trans people and allies, while trans-exclusionary accounts hailed the author as a hero and a “defender of women.” But this is not the first time Rowling has flirted with transphobia. Her 2015 novel The Silkworm, written under her pseudonym Robert Galbraith, featured a scene in which the main character, Cormoran Strike, discovers a trans woman and threatens her with prison time, with the accompanying threat of prison rape. In 2017, Rowland was caught liking a tweet that linked to a Medium piece filled with vitriol directed at trans women.

A similar incident occurred in March 2018, when Rowling liked a tweet that called trans women “men in dresses,” which her representatives at the time played off as “a middle-aged moment,” claiming her finger accidentally hit the like button for the tweet.

Rowling’s transphobia has come as a disappointment to many of her fans, despite trans people repeatedly pointing it out. But it shouldn’t come as a surprise to anyone familiar with the current state of British mainstream feminism. Though an anti-trans strain of UK feminism has always simmered under the surface, it’s really come to flourish over the last several years, especially in the wake of proposed reforms to the country’s Gender Recognition Act.

The rise of trans-exclusionary radical feminists in the UK

The Gender Recognition Act, which was signed into law in 2004, defines the legal process for trans people to change their legal sex on their birth certificates, which currently involves an expensive and highly intrusive investigation by an anonymous government board that has the final say over a trans person’s legal sex. In 2017, the UK government announced an inquiry into a proposed reform that would let trans people make a legal declaration that they pledged to live the rest of their lives as their transitioned genders. Opponents of the reforms seized the narrative, backed by a friendly press, distorting the proposal’s aims at so-called “self-ID.”

Anti-trans members of the British press repeatedly and falsely claimed that “self-ID” meant that a person could ostensibly declare themselves a man on Monday and a woman on Friday, allowing potential sex perverts to claim a female gender identity in order to access women’s spaces for nefarious purposes — a claim that research on the subject shows has essentially no merit.

The disinformation campaign soon moved on to spread falsehoods about trans children, and other hot trans topics du jour. As a result, a large proportion of mainstream British feminists, who sometimes call themselves “gender critical,” have expressed potentially transphobic views like Rowling’s, saying that it’s not possible to change biological sex. Meanwhile, in most mainstream US feminist circles, speaking out against trans women is not considered feminism.

But trans-exclusionary radical feminist (TERF) ideology has been helped along in the UK by media under the leadership of Rupert Murdoch and the Times of London for years. Any vague opposition to gender-critical thought in the UK brings accusations of “silencing women” and a splashy feature or op-ed in a British national newspaper. Australian radical feminist Sheila Jeffreys went before the UK Parliament in March 2018 and declared that trans women are “parasites,” language that sounds an awful lot like Donald Trump speaking about immigrants.

According to Heron Greenesmith, who studies the modern gender-critical movement as a senior research associate at the social-justice think tank Political Research Associates, gender-critical feminism in the UK grew out of a toxic mix of historical imperialism and the influence of the broader skeptical movement in the early aughts — which was hyperfocused on debunking “junk science” and any idea that considered sociological and historical influence and not just biology. Those who rose to prominence in the movement did so through a lot of “non-tolerant calling-out and attacking people,” Greenesmith said, much like gender-critical feminism. “Anti-trans feminists think they have science on their side. It is bananas how ascientific their rhetoric is, and yet literally they say, ‘Biology isn’t bigotry.’ In fact, biology has been used as bigotry as long as biology has been a thing.”

TERFism has spread so far in the UK that many pundits even blamed the overwhelming Tory victory in last week’s election on trans people, claiming that trans issues are just a hyper-woke product of a political left that has simply gone too far. The claim is a stretch, given that trans issues were not a significant issue in an election largely dominated by the looming prospect of Brexit and that many of the loudest anti-trans voices in the UK are in the Labour Party.

Then came the ruling in the Forstater case on Wednesday. Forstater sued the Centre for Global Development in UK employment court, claiming her view that “sex is a biological fact, and is immutable” represented a deeply held and legally protected philosophical view. However, court documents from the case show that Forstater’s actions went much farther than merely stating her beliefs. Several fellow CGD coworkers expressed concern to management over her anti-trans tweets. In one case, Forstater repeatedly misgendered a nonbinary person on Twitter. She also told the court that she does not believe it’s possible to change your sex and refused to recognize the legal right for trans people to do so.

After a hearing with a UK employment tribunal, Judge James Tayler ruled that Forstater’s gender-critical views did not represent a legally protected philosophical belief. “I consider that the Claimant’s view, in its absolutist nature, is incompatible with human dignity and [the] fundamental rights of others,” he wrote in his judgment.

Wednesday’s ruling has already been seized upon by the usual anti-trans voices who are propping it up as the latest example of the alleged suppression of free speech. It has become increasingly common for upper-class white people to express anti-trans views. For example, Irish comedian Graham Linehan, who now lives in the UK, has become infamous for his Twitter obsession with trans people and trans issues, which he claims is merely “defending women.”

Other celebrities, however, have spoken up for trans people. In fact, Hermione Granger herself, actress Emma Watson, supported trans rights in a viral Instagram post in October 2018.

As for Rowling, it’s likely she’s simply a product of her country’s culture. But that’s a cold comfort for fans of her work who happen to be transgender.