“Jackpot”: Inside the US military raid to kill ISIS leader Baghdadi 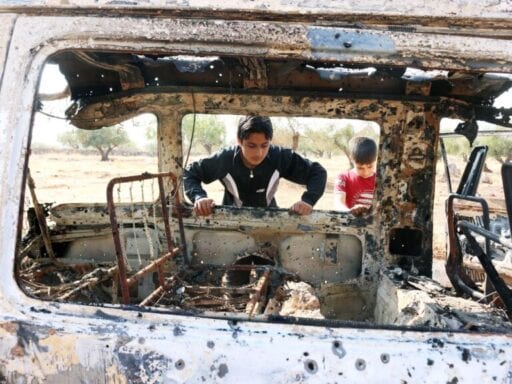 It was always going to be a complicated operation, but the US military — and a dog — pulled it off.

The five-year fight against ISIS culminated on Saturday night in what President Donald Trump called a “dangerous and daring nighttime raid” that killed the group’s founder and leader, Abu Bakr al-Baghdadi.

In the hours since the president teased on Twitter that “Something very big has just happened!,” top US officials, new reporting, and even Trump himself divulged a lot more information about how the operation in northwestern Syria unfolded.

Put together, the picture painted of the Baghdadi operation is one of painstaking intelligence work, ending with a complicated military mission some say could have gone smoother. For others, it was a crowning, cinematic achievement for the United States. It was “as though you were watching a movie,” Trump told reporters at the White House after announcing the mission’s success on Sunday.

Here’s how that operation — which took place 6,000 miles from the White House Situation Room — played out.

The US got actionable intelligence over the summer

Baghdadi took extensive measures to conceal his whereabouts for nearly a decade.

Ismail al-Ithawy, a top aide to the ISIS leader who was captured last year and is currently being held in an Iraqi jail and sentenced to death, told the New York Times that he and others would be stripped of all their electronics, blindfolded, and driven for hours before eventually finding themselves sat across from the so-called caliph. After a 15-to-30 minute meeting, the visitor would have to wait alongside guards for hours after Baghdadi left, only to be blindfolded again and driven away.

As far back as February 2018, Ithawy offered information to Iraqi intelligence about how those gatherings would go, giving agents their best glimpse into Baghdadi’s movements. “Ithawi gave valuable information which helped the Iraqi multi-security agencies team complete the missing pieces of the puzzle of Baghdadi’s movements and places he used to hide,” an Iraqi security official told Reuters on Monday.

But US officials needed concrete, credible information regarding his location so they could act on it. Early this summer, they got just that.

According to multiple reports, a disaffected ISIS member tipped off Kurdish forces in Syria to Baghdadi’s general location. Mazloum Abdi, the commander of those Kurdish fighters, tweeted on Sunday that there had been joint intelligence cooperation with the Americans for five months. The US also got information from an ISIS courier and one of Baghdadi’s wives, both of whom had been arrested and questioned.

Over the next few months, the CIA worked with Iraqi and Kurdish intelligence to pinpoint Baghdadi’s location, even placing spies in the region to track his movements. William Wechsler, a former top Pentagon official for special operations, told me that the US would “ideally try to put eyes on him” or, barring that, “get some audio of a phone call” to identify his precise whereabouts. But, of course, that’s not always possible, Wechsler said.

In this case, according to Trump, they found him. “A couple of weeks ago, they were able to scope him out,” he said at the White House on Sunday morning without going into detail. It turned out that Baghdadi was in the small northwestern Syrian town of Barisha in the home of Abu Mohammed Salama, another extremist group commander.

Planning for the mission, then, could truly begin.

There were major hurdles to the Baghdadi mission

US commandos trained and prepared for weeks ahead of the raid, as the unpredictability of combat can overwhelm even the best fighters in the world.

“I’ve seen operations where we believed we would go in at night and capture people, but instead we found ourselves in a massive firefight because they were more prepared than we thought,” Wechsler, now at the Atlantic Council think tank in Washington, told me.

Three issues in particular complicated the planning and execution of the mission.

First, the area in northwestern Syria where Baghdadi was is al-Qaeda territory, and the airspace above it is controlled by Syria and Russia. That meant US troops could’ve found themselves in a firefight with other terrorists if something went wrong, or dodging Russian and Syrian anti-aircraft weapons. Trump, however, said the US called the Russians to alert them that US aircraft would be operating in the area, while never disclosing why the US wanted to fly in the region.

Second, Trump had ordered the withdrawal of US troops from northern Syria three weeks earlier, even as the US intelligence community was honing in on Baghdadi’s location. As some US officials told the New York Times, Trump’s decision complicated planning for the mission as American fighters and equipment quickly began leaving the area.

Third, Baghdadi proved erratic. “He tends to change immediately,” Trump said on Sunday. “He had a lot of cash. He tends to change, like, on a dime, where he’ll be going to a certain location. All of a sudden, he’ll go someplace else and you’ll have to cancel.” The US military reportedly called off at least two missions just minutes before they began, though it’s unclear if that had anything to do with Baghdadi’s own decision-making.

But, per the president, the commandos finally got what they needed for the green light. “This was one where we knew he was there. And you can never be 100 percent sure because you’re basing it on technology, more than anything else,” Trump said. “But we thought he was there, and then we got a confirmation.”

Trump started to watch the raid around 5 pm Washington, DC time on Saturday as 50 to 100 US commandos took off in eight helicopters — mostly CH-47 Chinooks — from a military base near Erbil, Iraq. It was a dangerous flight, and the aircraft took fire while they flew low to the ground for roughly 70 minutes. They also had to fly over airspace controlled by Iraq, Turkey, Syria, and Russia, which increased the possibility someone might miscalculate because they believed the US was attacking them.

“There was a chance that we would have met unbelievable fire,” Trump said.

When they eventually reached their location, the commandos tried to call Baghdadi out of the compound. A few adults and 11 children did leave, according to the Washington Post, but the ISIS leader, as expected, remained inside — meaning the US troops had to force their way in. They “blew holes into the side of the building, not wanting to go through the main door because that was booby-trapped,” the president revealed.

Subsequent fighting reportedly led to the deaths of five enemy fighters inside the building while others perished outside, the White House noted in a statement to the Washington Post. But Baghdadi, strapped with an explosive vest, grabbed three of his children and took off into a series of tunnels underneath the compound. The US military sent a dog in after him, keeping a robot that could also go into the tunnel to track him in reserve.

Fearing for his life — “whimpering and crying and screaming all the way,” according to Trump — Baghdadi detonated the vest, killing himself and his three children. Defense Secretary Mark Esper told ABC News on Sunday that he didn’t have the details of Baghdadi’s emotional state during his final moments, but Trump insists “he died like a dog. He died like a coward.”

The American fighters visually identified Baghdadi during the operation, but they ran a DNA test to compare what they could gather with a sample they already had. It came back positive roughly 15 minutes after Baghdadi’s death — it was their target.

After Baghdadi was killed, US forces remained in the compound “for approximately two hours,” according to Trump, in order to collect “highly sensitive material and information from the raid, much having to do with ISIS origins, future plans, things that we very much want.”

Two adult males were taken alive and are now in US custody, according to the Pentagon. Baghdadi’s remains were also taken into custody and the disposal was “complete and was handled appropriately,” according to Army Gen. Mark Milley, chair of the Joint Chiefs of Staff. The remains of at least two of his wives, who were also strapped with explosive vests, were left behind.

Before heading back the way they came — with only two US troops and the dog injured — the US destroyed the entire compound to ensure it wouldn’t become a shrine to the dead ISIS leader. “Once our forces were off the objective we destroyed the target site to ensure it was physically destroyed,” Esper told ABC News.

“It was always going to be a daring mission”

Armed with new information gathered at Baghdadi’s final location, it’s likely the US will use the new intelligence to further track down some of the groups’ remaining leaders or otherwise try to disrupt the organization’s operations. A day after the raid, the US killed a top ISIS spokesman believed to be a potential successor to Baghdadi. It’s unclear if that strike was aided by the newly obtained material.

Between that and killing Baghdadi, the mission was clearly well worth the risk despite the many complications.

“It was always going to be a daring mission,” Wechsler told me. The worry he has now, though, is that the American public will assume the success of this and other operations — like the bin Laden raid — is standard. “Because we’re so good at this and these things happen so regularly now, there’s a risk that the population sees these as routine,” he said. “Every one of these missions poses a significant risk to the people involved. In this case, the risks were significant.”

This only underscores just how successful the operation turned out. Despite the danger, American commandos got their man, gathered new intelligence, and left mostly unscathed.

Of course, Baghdadi’s demise doesn’t mean ISIS goes down with him. The group will continue to terrorize people in the Middle East and around the world, and perhaps inspire attacks in the US and elsewhere. “The threat is not gone at all,” Michael Leiter, who directed the US National Counterterrorism Center from 2007 to 2011, told me on Sunday. Still, one of the world’s most dangerous terrorists is gone — and that was worth the risk.

Consider the vulture
The Baby-Sitter’s Club is coming to Netflix
Are Australia’s koalas going extinct? We asked an ecologist.
How voting by mail could save the US election
The Filipino neighborhood San Francisco destroyed
Why cashier’s checks are part of so many online scams