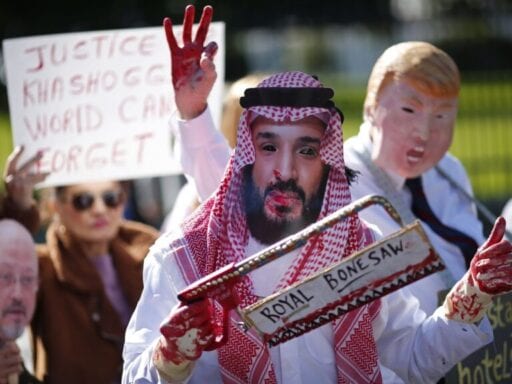 She called it a ploy to “gain public sympathy” after the Saudi Arabian journalist’s murder.

President Donald Trump reportedly invited the fiancée of slain journalist Jamal Khashoggi to the White House. She said no.

Hatice Cengiz, who was to marry Khashoggi before he was killed inside the Saudi Arabian consulate in Istanbul at the start of October, told a Turkish television news outlet that she declined an invitation from the White House from Trump.

“The statements made in the first days around his invite and the statements he made afterward opposed each other,” Cengiz, a Turkish national, told pro-government Turkish channel Haber Turk, according to CNN. “They were simply statements to gain public sympathy.”

She said whether or not she will go “will depend on the formation of conscience” and how the administration, which has been hesitant to condemn Riyadh for its role in her fiancé’s death, reacts to the case.

“I demand that all those involved in this savagery from the highest to the lowest levels are punished and brought to justice,” she said.

Khashoggi, a critic of the Saudi Arabian government and columnist for the Washington Post, entered Riyadh’s Istanbul consulate on October 2 to get a document verifying his prior divorce so he could marry Cengiz as she waited for him outside. He never emerged.

The Saudi government initially denied any involvement in his disappearance, saying he must have left through a back entrance, but evidence that something much more sinister had happened quickly emerged. The Saudis later said that the 59-year-old died in a “fist fight” during an interrogation, but they’ve since admitted it was premeditated.

The Saudis have arrested 18 people over the incident, including Saud al-Qahtani, a close aide to Crown Prince Mohammed bin Salman. US intelligence says the prince, often referred to as MBS, probably knew about what had happened to Khashoggi.

The Trump administration has offered an ambivalent response to Khashoggi’s murder. Trump initially hedged on speaking out too harshly about what happened, noting that the Saudis had initially denied involvement, and instead talked about inflated jobs numbers a package of Saudi arms deals would bring to the US.

As time has gone on and more facts have emerged, however, the White House has been compelled to speak more forcefully. CIA Director Gina Haspel reportedly listened to audio capturing Khashoggi’s interrogation and murder. And the president said the Saudis had engaged in the “worst cover-up ever” and revoked visas from those implicated in the killing.

That, however, seems to be too little, too late for Cengiz.

Is it okay to sacrifice one person to save many? How you answer depends on where you’re from.
The future of the Paris climate agreement is being decided this week
Vox Sentences: Another blow for Boeing
Michelle Obama’s necklace makes her message clear: Vote.
A new study shows that even the poorest immigrants lift themselves up within a generation
Read: Democrats release Ukraine scandal texts from State Department officials