James Mattis fancies himself a defender of democracy. He missed a big chance to show it. 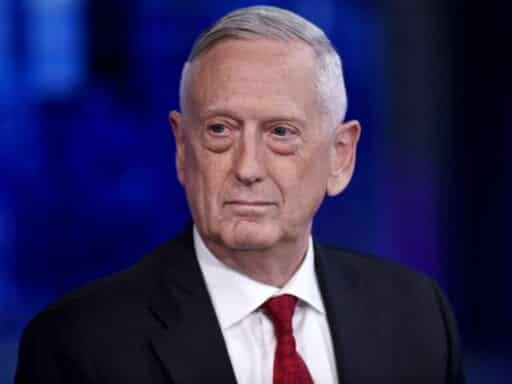 One commentator said Mattis’s response was “a shameful and bullshit non-answer.”

President Donald Trump is facing scrutiny for reportedly putting pressure on Ukraine’s government to investigate Joe Biden’s family, essentially pushing a foreign nation to interfere in the 2020 election on the president’s behalf.

While Trump admits to no wrongdoing, he has confirmed that he spoke with Ukraine’s president about the top 2020 Democratic contender.

A leading speculation is that Trump may have withheld $250 million in military aid to the eastern European country until it complied with his request. If true, it would be a stunning abuse of presidential power, and one that anyone committed to protecting and defending the US should be easily able to condemn.

But when ABC News’s Martha Raddatz on Sunday asked former Defense Secretary James Mattis whether “a president [should] be asking foreign leaders to investigate political opponents,” Mattis’s answer was lackluster.

“This is not something I have background on. I don’t know anything more than what I read in the news,” Mattis replied. “And apparently no one has seen the complaint, so I really prefer to talk about things I know more about.”

.@MarthaRaddatz: “Should a president be asking foreign leaders to investigate political opponents?”

Former Trump Defense Sec. Gen. James Mattis: “This is is not something I have any background on … I really prefer to talk about things I know more about” https://t.co/jMFPcBlHEI pic.twitter.com/But44gzLA9

In some ways, this is a fair answer. Mattis left the administration last December, well before Trump was accused of leaning on Ukrainian President Volodymyr Zelensky to look into Biden’s family, so Mattis certainly isn’t likely to have any firsthand knowledge of what may or may not have been said.

And the retired Marine general has been nothing if not consistent in saying he won’t openly criticize a sitting president, regardless of his personal views.

But as editor-in-chief of the military website Task & Purpose and Marine veteran Paul Szoldra tweeted right after, Mattis’ response was “a shameful and bullshit non-answer that should have just been ‘no.’”

He’s got a point. Raddatz’s question wasn’t, “Was Trump wrong to seek Ukraine’s help against Biden?” She simply asked if a US president — in general, and in theory — should ask a foreign counterpart’s assistance to thwart a domestic political opponent. That Mattis couldn’t respond to the easiest of softballs makes one thing extremely clear: The former Pentagon boss’s desire to stay above the fray outweighs his most recent commitments to democratic ideals.

Mattis considers himself a defender of democracy. He has an odd way of showing it.

When Mattis resigned over Trump’s shock decision to withdraw US troops from Syria (a move that has since been reversed), he wrote passionately in a letter to the president about why democracies like the US must stand together against potential adversaries. It wasn’t only a rebuke of the commander in chief’s worldview but a full-throated defense of the American democratic experiment that Mattis so often says is fragile.

It’s hard to square that viewpoint with his response in the ABC interview.

A foreign actor interfering in a US electoral process is anti-democratic, plain and simple. It doesn’t require the president’s involvement to make it so. Someone so singularly focused on protecting America’s way of life would surely jump at the chance to state that unequivocally.

But that’s apparently not Mattis, especially not in the Trump era.

As the president’s top defense aide, he purposefully shunned the press — and his democratic duty — in what may be his most lasting legacy in the Pentagon. Among other actions, he classified once publicly available information, curtailed Defense Department officials’ public engagements, and rarely spoke on the record while cameras rolled.

He routinely left the public mostly in the dark as to what the nation’s top defense official thought about the world’s most vital issues. That left ample space for the president to send mixed messages about US operations around the world, which only made it harder for American voters, allies, and enemies to have a clear picture of the actions and intentions of the most powerful military on the planet.

His reticence was somewhat understandable, if frustrating to defense reporters like myself — after all, staying off-camera made it easier to avoid Trump’s ire, especially if Mattis said anything the president might deem as a rebuke. And he had a lot on his plate, not least of which was overseeing multiple wars. Mattis, then, surely preferred to focus on his day-to-day responsibilities instead of preparing for a Sunday news show interview or to face Pentagon press.

But if he didn’t want to regularly engage the media and face the American people, he shouldn’t have taken the Pentagon job. And if he really wants to be seen as a flag carrier for democratic ideals, he should speak up now.

Two arrests have been made in death of Northern Ireland journalist Lyra McKee
The hidden calories in your booze, explained
How to make sure Congress can still function if its members are quarantined
Jeff Bezos just made one of the largest charitable gifts ever
Bon Appétit’s new Thanksgiving show is the most ambitious crossover event in history
The suddenly uncertain future of the Iowa caucuses, explained