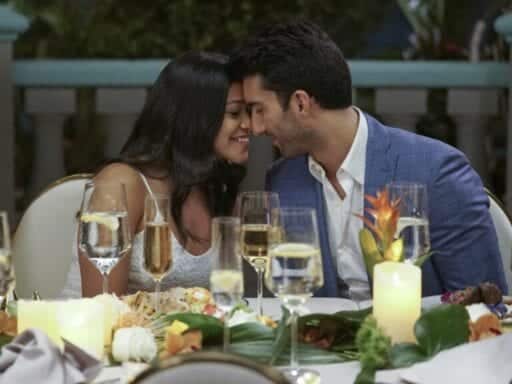 Jane the Virgin strips away its high-concept shenanigans for a blissful series finale.

The series finale of Jane the Virgin is an hour of pure joy. It’s an hour in which other emotions — all of the big, dramatic telenovela emotions that Jane the Virgin can and has indulged in before, like grief, fear, anger, betrayal — simply aren’t allowed to exist. Any moment that could simmer over into serious conflict is rapidly talked through, resolved, and put to bed before it can cause any damage.

In some ways, that approach is the inverse of the way Jane the Virgin usually tells stories. Since the show premiered on the CW in 2014, Jane the Virgin has built its reputation on pulling off giant, telenovela-style twists and grounding them in sincere emotions.

The show began with Jane, a 23-year-old devout Catholic committed to remaining a virgin until marriage, getting accidentally artificially inseminated. (“I know! Straight out of a telenovela, right?” purred the show’s “Latin Lover” narrator.) Then it made that high-concept premise land by having Jane process the trauma of the accident with her mother and grandmother, and think through whether or not she wanted to get an abortion before she had ever even had sex.

Since that premiere, Jane the Virgin has played with every outlandish trope in the book, and it has always kept its focus on the emotional reality of those tropes. It has had evil twins (but what would that do to your postpartum depression?), and dead characters coming back to life (but what does that do to your sense of identity?), and crime lords who disguise themselves with lifelike rubber masks and will stop at nothing to destroy Jane. (Jane goes to see a therapist to deal with her sense of powerlessness in this situation and learns some anxiety management techniques.)

But in the finale, Jane the Virgin strips away all of those larger-than-life plot twists. It’s already shown us it can do them and now it has nothing to prove. Instead, it takes this final hour to luxuriate in giving its characters a happy ending, and anything that might seem to threaten that happy ending is shooed away.

It’s all pure elation, pure celebration, the kind of episode of television that no other show could ever pull off without feeling saccharine or twee. But Jane the Virgin — with its commitment to showing the full lives of its characters, all the joy and all the grief, from births to weddings to deaths and everything in between — has earned this celebration.

Part of what makes the joy of this finale stick is how much it’s willing to play with our expectations. Every few minutes, it tosses out an issue that seems like it might become the make-or-break conflict of the episode, the thing that will give us one last wacky spree of shenanigans before we finally see Jane and Rafael safely married off — and then instead, it gleefully resolves that issue almost at once. Jane’s enormous, sunshine-y smile never leaves her face.

At first, it looks as though the issue might be that Jane won’t be able to get her book’s rewritten ending to the galley printers in time for Isabel Allende to get an updated copy and consider blurbing it (yes yes, this show’s portrayal of how book publishing works is nonsense, just go with it), and that maybe she’ll try to sneak out of her wedding preparations to get it there in time. But no, Jane says briskly, she would never do such a thing on her wedding day, and she’s made her peace with Isabel getting an unfinished copy.

But then Rafael decides to do the wacky shenanigan thing instead as a romantic gesture and gets arrested for speeding out of the printing press! Surely that will put a crimp in things?

Nope! Jane gleefully declares the gesture romantic and rushes off to bail him out of jail.

Nope! Jane is rich now from her book advance so she pays the bus driver to let her rent it out and now the bus is a whimsical wedding prop!

Complication after complication rears its head, but Jane never falters in her joyous belief that whatever is happening on her wedding day is perfect, so we don’t falter either.

Amid all the exuberance, we do get a single melancholy note. Jane’s parents Xo and Rogelio open the episode by announcing their decision to move to New York, but Xo rapidly backtracks: She doesn’t want to leave Jane and Alba behind in Miami. She doesn’t want to close this chapter in her life and say goodbye to her family.

And so we get one last heartfelt grilled cheese conversation with the three Villanueva women as they talk through what Xo should do next, and one last shot of the three of them sitting together on Alba’s porch swing after Xo decides to move to New York after all, processing the changes that have come to their lives.

But even Xo’s departure isn’t framed as truly sad. It’s just the next step forward for everyone. And it’s a way to give the viewers closure, because we can say goodbye to all of these characters through Xo, secure in the knowledge that we left them in the happiest possible resolution.

Jane the Virgin earned this happy ending. Now it’s letting us all glory in it. And that means that watching this finale feels like floating on a cloud of pure joy.