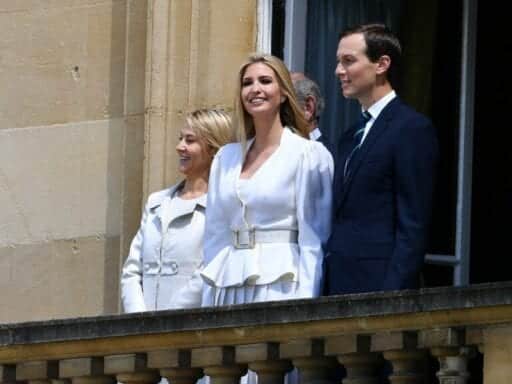 The first son-in-law says making huge cuts to resettlement “doesn’t make a difference.” But it does!

Jared Kushner thinks “it doesn’t make a difference” how many refugees are allowed to settle in the United States, he said in an Axios interview on HBO — a shocking perspective on a question that obviously makes a great deal of difference to the refugees themselves.

Before Donald Trump took office, the United States routinely allowed between 70,000 and 80,000 refugees to resettle permanently on our shores — a number he’s cut and cut again so that fewer than half as many refugees are able to come here.

This has ended up getting a bit overshadowed, politically, by other immigration-related controversies in the Trump era. But practically speaking, the change makes a huge difference for thousands of people who’d have been able to move to the United States had the pre-Trump status quo persisted.

Kushner described a photo he keeps on his desk of his grandparents who survived the Nazis and arrived as refugees and were able “to create the American dream.” It made his breezy dismissal of the reality for thousands of people an even more chilling look into the thought process happening at the highest levels of the American government.

American politics has been sporadically focused for months now on the question of what to do about the flood of asylum seekers arriving at the US-Mexico border.

The refugee resettlement issue is a very different one that nonetheless offers a useful lens through which to understand what’s happening on the asylum front. Refugee resettlement is a formal, organized process in which people displaced from their homes and living in camps in various locations around the world are able to apply for permanent resettlement elsewhere. There’s a lot of vetting involved, but there are always many more vetted people in need of resettlement than there are places for them in countries willing to accept refugees. It’s importantly distinct from the asylum situation because there’s no question of legality or securing the border. A lot of people would like to be resettled, but countries are only willing to take in so many people.

Trump, in particular, has repeatedly slashed the refugee resettlement cap, which had been bouncing around between 70,000 and 80,000, so that now fewer than 30,000 refugees can come per year.

It’s a big change and a very telling one. There’s a lot happening at the southern border and a lot of different issues and considerations in the mix. But what we’re seeing on the refugee front is that, fundamentally, the Trump administration just does not want to allow people with genuine humanitarian needs to come here.

That’s a statement of values. Kushner himself, midway through the interview, when asked by Jonathan Swan about the privileges he’s enjoyed in life, reflected that “this is an amazing country.”

“You know,” he said, “my grandparents came here as refugees and they were able to build a great life for themselves.”

This is part of the American story, and it’s a part the Trump administration is changing. So then Swan asked Kushner how he feels about the fact that “you guys have dramatically reduced the number of refugees taken into this country.”

Kushner’s answer was both callous and oddly ignorant.

Kushner on refugee cuts: “We inherited a crazy world”

Their exchange on this is worth reading in full because Kushner’s answers don’t really make any sense:

KUSHNER: Yeah, I think — look, the world right now is in, uh, we inherited a crazy world. I think what we had done is last year, we gave …

SWAN: But isn’t it always a crazy world, isn’t it?

KUSHNER: Right, I think right now you’ve got 65 million refugees in the world. You can’t have all of them come into your country.

SWAN: No, I know, but what’s the rationale for cutting so dramatically?

KUSHNER: Yeah, I think that the amount of money you can spend to help refugees resettle in their countries and deal with aid is very impactful, so we’re trying to —

SWAN: So you agreed with the policy of cutting it to that level?

KUSHNER: It doesn’t make a difference one way or the other the number. It’s, it’s …

SWAN: Well, I think it does. It means people are either living here or they’re not.

KUSHNER: Yeah, but in the scheme of the magnitude of the problem we have, I think that we’re doing our best to try to make as much impact to allow refugees to be able to go back to their places, end conflicts in places like Syria, and find ways to make sure that you’re funding these situations so that the people who are immediately becoming refugees can have as much care as possible. But we have a lot of tragedies all over the world and that, again, one of the reasons why as Americans we’re very lucky to be where we are.

There is a kind of interesting dorm-room philosophical question about how to think about the reality that there are 65 million refugees in the world and obviously the United States is not going to accept nearly that many.

But the actual policy question facing the Trump administration was whether, on the margin, to respond to the global surge in refugees by accepting more or fewer resettlement cases. They chose to accept dramatically fewer. And Kushner’s only explanation for why that’s a good idea is that “it doesn’t make a difference one way or the other” in the course of larger tragedies like the civil war in Syria.

But obviously the fact that Kushner’s grandparents were able to move to the US after surviving the Holocaust made a really big difference in their lives and the lives of the Kushner family. Yet he can’t even be bothered to remember whatever the thin policy rationale for this move is supposed to be.

It’s telling about the values that animate the Trump administration, but also about Kushner’s basic failure in high office. He doesn’t have any policy chops or governing experience that would be relevant to his job. But he could, at least in theory, offer some kind of voice of humane values from outside the narrow, cramped circles of hard-right ideologues who’ve come to populate the Trump administration. But in addition to being unqualified, he gives the impression of just not being a thoughtful person. The kind of person who’d go out of his way to bring up his own family’s refugee history without having any kind of grasp on how his team is impacting today’s refugees or why.

Lifting the cap back up by another 40,000 or 50,000 people per year really wouldn’t make a huge dent in the overall global need. But for tens of thousands of families, it could make all the difference in the world. And a senior adviser to the president who personally credits America’s past generosity to refugees for his own good fortune in life doesn’t care.

A federal court just reinstated DACA, and the implications go far beyond immigration
Bernie Sanders lost among New Hampshire voters focused most on beating Trump
The year reality collapsed into pixels
Silicon Valley’s richest are getting richer just as the pandemic is getting worse
San Francisco’s facial recognition technology ban, explained
People are running over George Floyd protesters. Are far-right memes to blame?