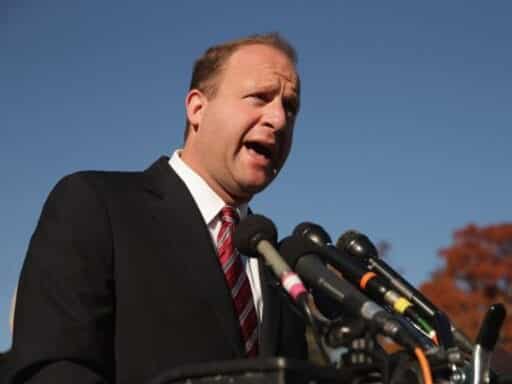 Polis could make history in November.

Rep. Jared Polis came one step closer to making history on Tuesday night, winning Colorado’s Democratic primary for governor. If Polis prevails in November, he will make history as the first openly gay elected governor in the United States. Polis certainly is aware of the significance of this in the Trump era.

“I think it really gives Colorado an opportunity to stick a thumb in the eye of Mike Pence, whose view of America is not as inclusive as where America is today,” Polis told Colorado Democrats during a recent speech.

If Polis wins in November, his partner and two kids will join him in the governor’s mansion. Still, the five-term House member’s chance to make history on a national level hasn’t become the central focus on his campaign for governor. Instead, Polis has run on a bold progressive platform, proposing Medicare-for-all and universal full-day preschool and kindergarten for Colorado’s public school kids.

A win for Polis in November would be a national milestone. Although former Gov. Jim McGreevey of New Jersey, a Democrat, made history by coming out as gay while in office in 2004, Polis would be the first openly gay man elected to a governor’s mansion.

Oregon Gov. Kate Brown is also the nation’s first openly bisexual governor, as well as the first openly LGBT governor when taking office. Brown succeeded former Oregon Gov. John Kitzhaber when he resigned in 2015 and soon after won a special election in 2016.

The 2018 midterms has become a big year for historic candidacies. About 575 women have so far announced their intention to run for the US House, Senate, or governor’s seat, the majority of them Democrats. Democrat Stacey Abrams faces an uphill battle in deep-red Georgia, but she has a shot at becoming America’s first black woman elected governor. Though these candidacies have sometimes been characterized as part of the Trump resistance, it’s clear that the American public is starting to nominate candidates that represent the diversity of the overall population, not just straight white men.

Idaho’s legislature hasn’t addressed the coronavirus. But it has passed 2 anti-trans bills this week...
Think you own your stuff? Think again.
More people have already voted in Texas than did in 2016
The real story behind Rosie the Riveter
Vox Sentences: Georgia’s 53,000 pending votes
Can banning plastic straws really save the ocean? No. But we should ban them anyway.