Jay Inslee, the climate candidate of 2020, is ending his campaign 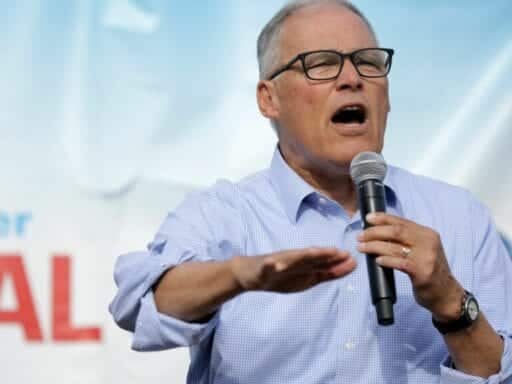 Inslee put out some of the most detailed plans to combat the climate crisis. He’s hoping the eventual nominee adopts them.

Washington Gov. Jay Inslee is officially out of the Democratic race for president, he told MSNBC’s Rachel Maddow on Wednesday night. But he’s still intent on keeping climate change at the forefront of the national conversation.

“It’s become clear that I’m not going to be carrying the ball, I’m not going to be the president,” Inslee told Maddow Wednesday night. “I’m withdrawing from the race, but I’ve been fighting climate change for 25 years, and I’ve never been so confident of the ability of America now to reach critical mass to move the ball.”

Inslee entered the massive primary field with one goal: to make 2020 all about climate change and the existential threat it poses to the globe. A longtime vocal advocate for getting the Democratic National Committee to hold a climate debate, Inslee is dropping out a few weeks before CNN is set to hold a climate town hall that he did not qualify for due to low polling numbers.

In a huge Democratic field for president, Inslee’s single-minded mission gave him serious clout among climate groups, but it ultimately didn’t help him break through to a larger audience.

Even though Inslee is out of the race, he’s hoping the multiple, detailed plans he released to combat climate change will serve as a road map for whoever becomes the Democratic nominee. Those plans included a very detailed proposal to get America carbon-neutral by 2045, a plan to build green infrastructure in America, and yet another plan to phase out fossil fuel production in the United States while transitioning the country to clean energy. And on Wednesday morning, Inslee released a “growing rural prosperity” climate plan focused on rural communities and farmers.

Inslee essentially laid out a detailed path forward for a Green New Deal — a path he’s hoping the eventual Democratic nominee will follow.

His goal is to make sure the eventual Democratic nominee is prepared for a critical moment. Each new international climate report contains dire warnings about melting ice caps, stronger storms, and rising sea levels. But under Donald Trump’s presidency, the US has pulled out of the Paris climate accord and the Obama-era Clean Power Plan, reversing the climate initiatives of the previous administration.

If Inslee had his way, the full power of the presidency would be laser-focused on combating climate change. Even though he’s out of the race, however, climate change is rising as an important issue for Democratic voters in 2020. Having crafted a serious, detailed plan to fight it is no small thing. The question is whether Inslee’s influence will continue to be felt now that he’s out of the running for the Democratic nomination.

There were already other 2020 candidates who listed climate change as a top priority when Inslee got in. But no one trumpeted it as much as he did — and few candidates have put out as many detailed plans.

Inslee’s plans have gotten plenty of praise from the Sunrise Movement, the youth climate activist group that’s close to Rep. Alexandria Ocasio-Cortez, the co-author of a Green New Deal resolution in Congress. The centerpiece of Inslee’s climate change strategy is a plan to rebuild America’s infrastructure and dramatically change US manufacturing in green, energy-efficient ways.

A major roadblock the plan would face is that it’s expensive; it would cost $9 trillion over 10 years ($300 billion in public investment per year, plus an additional $600 billion in private investment). Inslee, however, has argued that his plans are far cheaper than the “enormous cost of doing nothing here.”

As the governor of a blue state, Inslee has aggressively prototyped his national plans by pushing back against the Trump administration’s climate actions at the state level.

With both the Washington state House and Senate under Democratic control, Inslee recently signed into law a bill that would get the state fully off coal energy and carbon-producing energy sources by 2045. An Inslee-backed effort to start a new carbon fee was shot down by a majority of state voters on a ballot initiative in 2018.

“The thing that stands out for me is the largest existential threat to our homes, and that’s carbon pollution and climate change,” he told Vox last year. “That’s the one that impacts us all the most severely, in the most places, for the longest period of time. Being able to advance climate change policies, which can’t happen under Trump — who’s called it a hoax — [states] are the only place we can make progress.”

Inslee is no longer in the running for 2020. But he still wants to bring that vision to the White House. Should the eventual Democratic nominee adopt his ideas, there remains a chance he still could.

Why Bill Gates is worried
Jeff Bezos has a new venue for fighting critics: Amazon’s financial reports
The many ways we know 2020 will be a banner year for voting
What are TSA agents doing now that hardly anyone is flying?
Daylight saving time ends Sunday: 8 things to know about “falling back”
Inside Jack Dorsey’s radical experiment for billionaires to give away their money