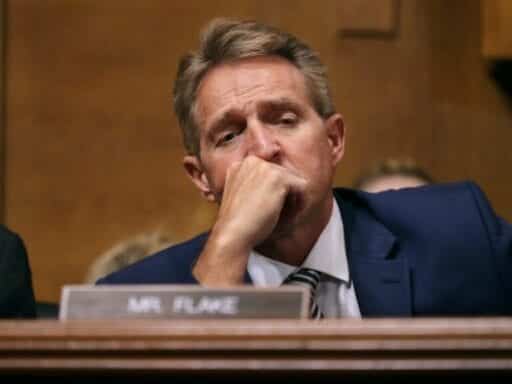 His main complaints come down to process.

Sen. Jeff Flake on Friday afternoon threw Democratic and Republican lawmakers for a loop by calling for a delay on the Senate vote for Supreme Court nominee Brett Kavanaugh. It’s a push the Arizona Republican made in order to give the FBI more time to look into sexual misconduct allegations that have been brought against Kavanaugh, and it confused many, since it followed a definitive statement of support for Kavanaugh that Flake had put out just hours earlier.

After the dust had settled and Republican leadership agreed to Flake’s request to push a key Kavanaugh vote no more than one week, the senator offered reporters some additional insight into his motivations for making this demand as part of a scrum at the Capitol.

Much like the reasoning cited by his fellow Arizonan Sen. John McCain ahead of his iconic health care vote, Flake says his efforts came down to one thing: protecting the sanctity of the confirmation process.

Flake emphasizes that he sees himself aligned with Kavanaugh as a judge when it comes to their shared “conservative” ideology, and he says he “would love to see him confirmed.” He notes, however, that he’ll only be able to fully get behind his nomination if some of the doubts surrounding the sexual misconduct allegations Kavanaugh faces get cleared up.

Here’s Flake’s last-minute announcement, explained — in his own words.

On the exact agreement that’s been reached:

What we’ve said is that the leader will not have a cloture vote on the bill until the report is filed. The report is given by the FBI, as I understand it, to the White House, and then they give it to the committee. So they’ll be giving a written report to the committee and we’ll take that into account as we have the cloture vote and the final vote.

As Flake has indicated, under the agreement that’s been brokered, Senate Majority Leader Mitch McConnell does not intend to hold a “cloture” vote on Kavanaugh’s nomination until after the FBI report has been filed. A cloture vote is a procedural step the Senate must take in order to limit debate on the nomination, so that a final vote on his confirmation can advance.

On wanting to support Judge Kavanaugh:

I wanted to support him. I’m a conservative; he’s a conservative judge. But I want a process we can be proud of. I think the country needs to be behind it. We need a more bipartisan process.

Let me emphasize again: I’m a conservative. I would love to see Judge Kavanaugh confirmed. And I hope to be able to do that, but I want a better process.

On whether the sexual assault survivors he spoke with in the elevator on Friday affected his decision:

There have been interactions with a lot of people on phone, email, text, walking around the Capitol, you name it. It has been remarkable over the past week the number of people who saw Dr. Ford speak yesterday and were emboldened to come out and to say what had happened to them. I’ve heard from friends, close friends — had no idea.

On why he waited so long to make this statement:

I’ve been working on trying to get a broader agreement and some buy-in from both sides.

On what Democrats said in the back room during the Senate Judiciary Committee meeting on Friday:

I wanted to hear that at least there would be — if we took this action, which is a tough thing to get people to change a schedule that’s there — that there would at least be some Democrats saying, “Hey this is a better process,” and that it could bring some of the country along and they would feel better about this. We can’t politicize the Supreme Court. It’s the last institution in this country that still is respected above all others, and we can’t lose it.

President Donald Trump on Friday directed the FBI to open an investigation into the sexual misconduct allegations Kavanaugh faces. Now the countdown begins.

The Trump administration says global slavery and child labor are bad — for American businesses
Why it’s still unlikely we’ll have a Covid-19 vaccine before Election Day
Vox Sentences: Nevada is no Alabama
Polls: Senate races in Alaska and South Carolina are surprisingly competitive for Democrats
Tropical Storm Dorian: what we know about its path and its impact on Puerto Rico
Hurricane Dorian photos: the aftermath of a Category 5 storm