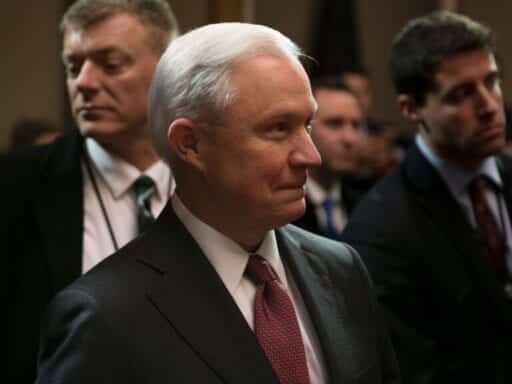 Share
Loading...
Then-US Attorney General Jeff Sessions looks on during the mock swearing-in of Republican Sen. Luther Strange, his replacement, in 2017. Sessions is now running to unseat the Democrat who defeated Strange in a special election. | Jim Watson/AFP via Getty Images

Jeff Sessions is running to reclaim his old US Senate seat.

On Thursday night, the longtime former Republican senator from Alabama and President Donald Trump’s former attorney general announced he would run in 2020. He joins an already crowded Republican field that includes Rep. Bradley Byrne and former Chief Justice of the Alabama Supreme Court Roy Moore, who lost a 2017 special election after being accused of sexually molesting and assaulting teenage girls — at least one under the age of consent.

These men are all vying to run against the winner of that 2017 special election: Democrat Doug Jones. Jones is widely seen as the most vulnerable Democratic senator of the 2020 cycle, if only for the fact he is a Democrat in a deeply red state that loves Trump.

The conventional wisdom among Alabama political experts is Sessions could beat Jones; he’s a known and well-liked quantity in the state. But first he has to get through what could be a tough and nasty Republican primary — and there’s already a lot of speculation about what the rocky relationship between Trump and Sessions could mean for the race. Jones noted that in a statement.

“Since Jeff is not running against me at this point, it would seem that folks need to be focused on the reactions of his opponents in the Republican primary and perhaps President Trump’s tweets about him over the last couple of years,” Jones said.

Sessions’s ad announcing his race was clearly trying to diminish any lingering tensions between Trump and himself. The 30-second spot made no mention of him running for Senate, other than his campaign’s logo in the corner. Instead, Sessions used the time to insist he was still loyal to the president.

“When I left President Trump’s cabinet, did I write a tell-all book? No,” Sessions said. “Have I said a cross word about our president? Not one time. I was there to serve his agenda, not mine. The president’s doing a great job for America, and Alabama, and he has my strong support.”

Trump hasn’t extended the same courtesy to Sessions in the past — angrily tweeting over a dozen times about Sessions’s decision to recuse himself from any Department of Justice investigation into Russia. (Sessions did so because he was a Trump campaign surrogate before becoming attorney general.)

This uncomfortable dynamic raises the question of who Trump will endorse in the 2020 Senate primary election. And it will be a test of how powerful Trump’s endorsement is in Alabama — a state he won by over 30 points in 2016.

The dynamic between Trump and Sessions may not hurt Sessions

Sessions is entering the Alabama Senate race in a strong position: he has strong name recognition and a substantial war chest.

“I think in Alabama he has a store of good will and sympathy based on how he was treated by the president,” Natalie Davis, political science professor emerita at Birmingham-Southern College, told Vox.

Davis said she thinks it’s very possible for Alabama voters to like Sessions and Trump at the same time, in large part because the two men are both pursuing a similar conservative policy agenda.

“I don’t think you can pit them against each other,” Davis said. “[Sessions] might as well have written the immigration plan, he’s always been a strong proponent of anti-immigrant policies. If you go down the list of Republican issues, it’s a nice fit.”

And even though the state certainly loves Trump, the president already doesn’t have a great endorsement track record there. In the 2017 special election to fill Sessions’s seat, Trump endorsed Luther Strange, the establishment Republican pick. Strange subsequently lost the primary to Roy Moore.

Byrne, a Republican member of Congress, is doing everything he can to get in Trump’s good graces. But as Davis pointed out, he just doesn’t have the name recognition of either Sessions or Moore. The latter has “probably the biggest email list in the universe,” Davis said.

Moore is also an unknown entity in the race. He has a personality more closely aligned to Trump than Sessions does. And while the sexual misconduct allegations that surfaced in 2017 damaged him among Alabama’s electorate, it’s yet to be seen if they will cause Alabama Republicans to abandon ship in the primary.

“There are two schools of thought: He’s in the runoff no matter what, and then, voters have done what they can for Roy Moore, it’s time to move on,” Davis said. On the other hand, people thought Moore was in trouble in the 2017 primary, but “you tell the people of Alabama they can’t do something like elect Roy Moore, they sure as hell will do it, that’s the way they roll.”

All of this could make for an interesting four months ahead of the March Republican primary.

Nursing homes are especially vulnerable to Covid-19. Here’s what it’s like to work in one.
Culture in the 2010s was obsessed with finding community — and building walls
The new Apple-Google contact tracing tool finally seems useful
Hosni Mubarak’s death and despotic rule, briefly explained
Thousands arrested protesting a new Indian citizenship law that excludes Muslims
Drive-ins were huge in 2020. But can they work for live music?