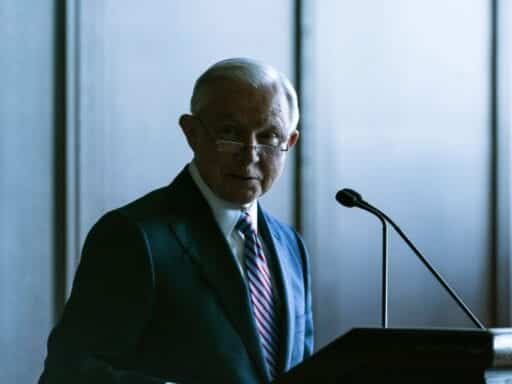 “These same people live in gated communities … and if you try to scale their fence, believe me, they’ll be only too happy to have you arrested and separated from your family,” he joked in a speech.

Attorney General Jeff Sessions used a controversial Bible verse to justify the Trump administration’s “zero tolerance” immigration policy that led to the separation of families at the border.

Now the nation’s top law enforcement official is deriding those who opposed the administration’s practice of splitting up families. In a speech to the Criminal Justice Legal Foundation on Tuesday in Los Angeles, California, Sessions claimed that the administration is just trying to enforce the laws, and called those who protest that enforcement the “lunatic fringe.”

“The rhetoric we hear from the other side on this issue — as on so many others — has become radicalized,” Sessions said. “We hear views on television today that are on the lunatic fringe. And what is perhaps more galling is the hypocrisy. These same people live in gated communities and are featured at events where you have to have an ID even to hear them speak.”

“And if you try to scale their fence, believe me, they’ll be only too happy to have you arrested and separated from your family,” Sessions joked, to a smattering of laughter.

Trump’s decision to separate families at the border sparked widespread and rare bipartisan criticism. The pressure ultimately forced Trump to sign an executive order last week to the practice, and instead attempt to detain families together indefinitely.

“They want borders in their lives but not yours and not the American people’s,” Sessions continued. “This is why the American people are sick of the lip service and the hypocrisy. They are sick of the politicians who abandon their promises as soon as the mainstream media criticizes them. They’ve seen it for decades. And now they are supporting a president who is on their side.”

Sessions claimed misleadingly that those opposed to separating families were advocates for open borders. Other members of this administration have also argued this false dichotomy on immigration.

“On Wednesday, President Trump ordered this administration to ensure that when we apprehend illegal aliens at the border and hold them for criminal prosecution and to adjudicate their immigration claims, we do what we can to keep families together,” Sessions said, adding that the “open borders crowd” responded that they “didn’t want them held or deported at all.”

Trump’s executive order seeks to detain families indefinitely — a violation of the Flores settlement, a judicial consent decree that says children can’t be held in detention for more than 20 days, with or without parents. The Trump administration is asking Congress to change this, and Sessions’s own Department of Justice also is seeking to modify the settlement so it can detain families and kids for longer than 20 days, which Sessions acknowledged in his speech.

Critics have also decried Trump’s comments about deportation that suggested migrants, including asylum seekers, should be deported immediately, without due process — rights afforded even to noncitizens under the Constitution.

The Trump administration’s hard-line policies have, however, intensified calls among the left to “abolish ICE.” The rallying cry against what some progressives see as the federal government’s draconian immigration enforcement has grown louder during the Trump administration, and spiked in the wake of family separation. National Democratic politicians aren’t exactly on board with the idea of axing ICE — and, in general, most mainstream Democrats support border enforcement, even if they’re against Trump’s wall and other policies.

Why is it so hard to forgive?