Jeff Sessions might have just lost his most important supporter: the Senate 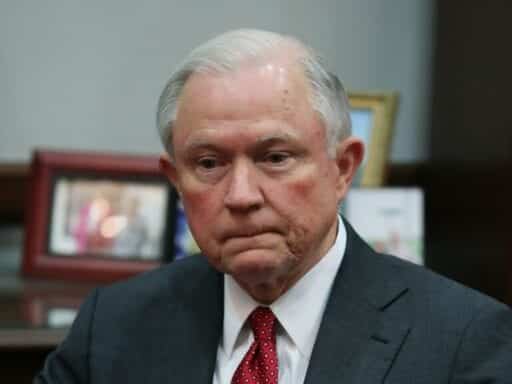 Key senators signal that if Trump were to want a new attorney general — one with the power to fire Robert Mueller — they’d confirm him.

In an interview with Steven T. Dennis of Bloomberg News published Thursday, current Senate Judiciary Committee Chair Chuck Grassley (R-IA) and Sen. Lindsey Graham (R-SC), who is potentially positioned to take over the Judiciary Committee in 2019, each indicated the Senate’s schedule might have an opening for confirming a new attorney general.

“The president’s entitled to an attorney general he has faith in, somebody that’s qualified for the job, and I think there will come a time, sooner rather than later, where it will be time to have a new face and a fresh voice at the Department of Justice,” Graham said. “Clearly, Attorney General Sessions doesn’t have the confidence of the president.”

Firing Sessions would be the first step to shutting down special counsel Robert Mueller’s investigation into the relationship between Trump’s 2016 presidential campaign and Russia, and Trump’s firing of FBI Director James Comey in May 2017. Sessions himself cannot fire Mueller because he recused himself from the Department of Justice investigation into Trump and Russia; a new attorney general would not be subject to that recusal and would be able to direct the Mueller investigation or shutter it.

Graham stressed that it would be a bad idea to fire Sessions before the midterms. He said it would “create havoc” to force the Senate to confirm a new attorney general and a new Supreme Court justice at the same time; confirming Brett Kavanaugh to the Supreme Court is the Senate’s top priority when they return in September.

.@JohnCornyn says Trump shouldn’t fire Sessions & no one can be confirmed to replace him during this Congress

However, current Senate Judiciary Chair Grassley indicated to Bloomberg that he would have time to take up another nomination this fall. “I do have time for hearings on nominees that the president might send up here that I didn’t have last year,” he said.

Trump, for his part, continues to publicly criticize his own attorney general — on Thursday morning, he complained to Fox & Friends’ Ainsley Earhardt that Sessions “never took control of the Justice Department.” In an apparent response, Sessions made an unusual public statement Thursday insisting “the Department of Justice will not be improperly influenced by political considerations.”

All of this adds up to indicators that Sessions’s time in the AG office could be winding down — and that would leave a clear path to shutting down Mueller.

Why the GOP Senate’s turn against Sessions is so important

Sessions recused himself from the Justice Department’s investigation into Trump-Russia contact soon after being confirmed as attorney general, a decision that immediately soured his once-close relationship with Trump.

Trump has spent the past year and change publicly fulminating about his attorney general and the “‘Justice’ Department,” and their failure to prosecute Hillary Clinton for unspecified alleged crimes after the FBI cleared her of criminal wrongdoing in 2016.

Just this morning, Trump made sure to express his lack of confidence in Sessions in a high-profile interview on Fox & Friends (an interview during which he also seemingly confessed to breaking campaign finance law): “I put an attorney general who never took control of the Justice Department. Jeff Sessions. Never took control of the Justice Department. It’s sort of an incredible thing.” He went on to criticize the FBI.

Reports have indicated that Trump has decided to fire Sessions on multiple occasions. And yet, Sessions remains.

In fact, Sessions issued a rare public statement affirming his role on Thursday afternoon, saying, “While I am Attorney General, the actions of the Department of Justice will not be improperly influenced by political considerations. I demand the highest standards, and where they are not met, I take action. However, no nation has a more talented, more dedicated group of law enforcement investigators and prosecutors than the United States.”

Statement from the Attorney General pic.twitter.com/eMF0CPXLZZ

Trump generally appears much more reticent to actually fire subordinates he hates than his Apprentice persona would suggest. Sessions, for his part, appears to have decided that he won’t be bullied out by Trump complaining about him. He’s made a show of solidarity with other DOJ officials Trump is sometimes mad at (like Deputy Attorney General Rod Rosenstein, who is overseeing the Mueller probe because of Sessions’s recusal).

Sessions has been loyal to Trumpism, if not Trump personally

Sessions has been by far the most productive member of the Trump administration when it comes to implementing policies, overhauling immigration enforcement from the DOJ side, and shifting US attorneys’ priorities toward drug and violent crimes and away from white-collar prosecutions.

While Trump complained to Fox’s Earhardt on Thursday that he hired Sessions only out of loyalty — Sessions was one of Trump’s first endorsers in Congress — Sessions is in the job because he believes in Trumpism more than Trump does.

Sessions’s strongest protection, though, has been that he’s been assumed to have the support of his former colleagues in the Senate. Grassley had publicly opposed the idea of firing Sessions before because he said he didn’t have the time to confirm a second attorney general in addition to other executive appointments and waves of federal judges. Senators showed Sessions a lot of support and esteem during his confirmation, and appeared at the time to trust him more than they trusted Trump.

But over the past year, Sessions has apparently fallen out of favor with both men — or, at least, they’ve decided it’s more important to back President Trump.

Grassley has fought Sessions on passing a criminal justice reform bill; Sessions opposes any effort to reduce criminal sentences, while Grassley has backed a bill that would reduce sentences given to new prisoners and would allow some current prisoners to earn sentencing reductions. That fight might explain Grassley’s apparent change of heart.

Graham, however, is trickier. He’s always disagreed with Sessions on immigration but remained loyal to him as a colleague. But Graham is in an odd relationship with Trump in which he obsequiously praises him on some issues while trying to influence him on others. Graham appears to have calculated that the president wants the Senate to be willing to confirm a new attorney general — and he’s all but promised, that as the man running the Judiciary Committee next year, he would do just that.

The FBI recovered most of Colonial Pipeline’s ransom, but the ransomware threat remains
How one woman is trying to end period stigma and the “tampon tax”
America’s racist housing rules really can be fixed
The abuse allegations against Rep. Keith Ellison, explained
Vox Sentences: The Green New Deal gets real
What young Iranians think about the latest US-Iran conflict