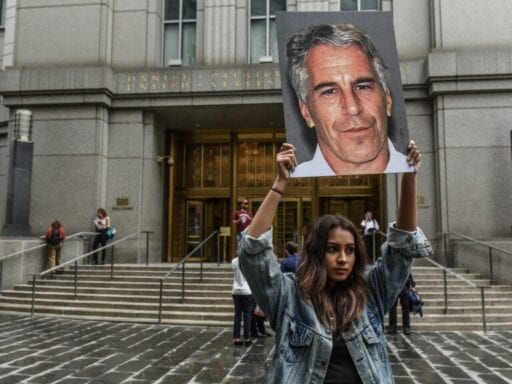 Epstein’s body was found hanged at the Metropolitan Correctional Center Saturday around 7:30 am, the New York Times reported. At the time of his death, he was awaiting trial and facing the possibility of 45 years in federal prison.

Epstein was arrested in New Jersey and charged with sex trafficking in July; he was denied bail shortly after. A week later, he was found unconscious in his jail cell with marks on his neck, according to the New York Times. Officials suspected the marks may have been the result of a suicide attempt, but were also investigating the possibility he had staged a suicide attempt or had been assaulted by another prisoner. A spokesperson for the New York City Medical Examiner told the Washington Post her office was investigating the death.

Epstein was first indicted in 2007 after being accused of sexually abusing dozens of underage girls at his mansion in Palm Beach, Florida. He was required to register as a sex offender, and spent 13 months in a county jail after his lawyers worked out a deal with then-US attorney and former Trump administration Labor Secretary Alex Acosta.

After Epstein’s release, allegations of assault continued; his recent arrest came after allegations surfaced that he recruited minors to his houses in Palm Beach and New York for sexual abuse. As Vox’s Jane Coaston and Anna North reported:

Epstein has said that any encounters he had with his accusers were consensual, and that he believed they were 18 at the time. He has pled not guilty to the trafficking charges. But in July, a woman named Jennifer Araoz said in an interview with Today that Epstein had forcibly raped her in 2002, when she was about 15 years old.

Meanwhile, disturbing details about Epstein’s past continue to come out, including reports by people who knew the money manager that he wanted to “seed the human race with his DNA by impregnating women at his vast New Mexico ranch,” according to the New York Times.

Epstein was an immensely wealthy money manager who had a “collection” of famous friends, including Bill Clinton and Donald Trump, Coaston and North reported. Despite being known for his interest in young girls for years, he long managed to evade charges:

When authorities began investigating Epstein, he assembled a team of private investigators to dig up dirt on the girls who accused him and the police and prosecutors working the case. Then he and his team of powerful lawyers, including Alan Dershowitz and Kenneth Starr, were able to convince prosecutors to go easy on him despite disturbing allegations by a growing number of women and girls.

Unlike during his first trial, Epstein faced increased public scrutiny in recent weeks, brought in part by reporting by the Miami Herald’s Julie K. Brown, criticism of his light sentence in 2007, and the release of previously sealed documents that outlined the allegations Epstein faced in graphic detail. While the criminal proceedings against him will now come to a close, the civil suits Epstein faces will not. The sex offender was the defendant in multiple ongoing civil suits at the time of his death, most filed by women who accused Epstein of sexually abusing them when they were underage girls.

Among them was a case filed against him and socialite Ghislaine Maxwell in which a woman alleged that Epstein had held her as a sex slave when she was 17 years old. She said the pair had trafficked her to several influential people, including lawyer Alan Dershowitz, British Prince Andrew, Duke of York, former Senate Minority Leader George Mitchell, and former New Mexico Gov. Bill Richardson. Recently unsealed documents in this case also contained links to President Donald Trump, with flight records showing Trump flew on Epstein’s private plane in the late 1990s.

Adam Klasfeld, a reporter for Courthouse News, wrote Saturday a legal expert told him Epstein’s death will likely make it difficult for Epstein’s high-profile friends to block any evidence found during a search of his home that incriminates them.

According to the expert, Epstein was the only person who could legally challenge the search warrant that authorized the review of his home; due to his death, “everything will be admissible against any other defendant without a possibility of a motion to suppress.” This would suggest others, like Maxwell, could be implicated in the crimes Epstein stood accused of, should evidence emerge that indicates wrongdoing.

Attorney Lisa Bloom, who represents many of Epstein victims, told NBC News Saturday that she and those she represents plan to continue their civil cases against Epstein’s estate: “Victims deserve to be made whole for the lifelong damage he caused. We’re just getting started.”

Antarctica has lost 2.71 trillion tons of ice. Here’s what that looks like.
Nancy Pelosi explains what Democrats gained by holding onto the articles of impeachment
The essential worker trap
How Awkwafina rode the unruly woman trope to stardom
Sen. Feinstein says she did not leak Ford’s letter
This former governor pardoned a man convicted of raping a child. His reasoning was deeply flawed.