Jeffrey Epstein wasn’t on suicide watch when he died. Officials want to know why. 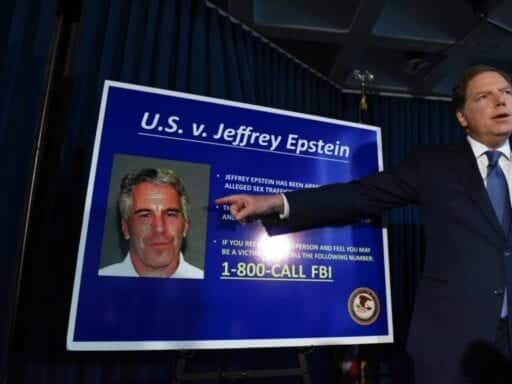 Share
Loading...
The US Attorney for the Southern District of New York as he announced Jeffrey Epstein would face sex trafficking charges. | Stephanie Keith/Getty Images

The FBI and DOJ have launched investigations into Epstein’s death.

The FBI and Department of Justice are launching investigations into New York financier and convicted sex offender Jeffrey Epstein’s apparent death by suicide in a Manhattan jail early Saturday morning.

The investigations come amid questions from lawmakers and others over how Epstein could have died by suicide while inside a facility operated by the federal Bureau of Prisons.

Epstein was awaiting trial for sex trafficking charges and facing the possibility of 45 years in federal prison at the time of his death. The immensely wealthy money manager was accused of sex crimes against dozens of young girls, who he allegedly raped and molested over years at his luxury properties across the country.

The financier was first indicted in 2007 after being accused of sexually abusing dozens of underage girls at his mansion in Palm Beach, Florida. He was required to register as a sex offender, and spent 13 months in a county jail after his lawyers worked out a deal with then-US attorney and former Trump administration Labor Secretary Alex Acosta.

After Epstein’s release, allegations of assault continued; his recent arrest came after allegations surfaced that he recruited minors to his houses in Palm Beach and New York for sexual abuse.

Initial reports indicated Epstein was placed on “suicide watch” in late July after officials believed he may have attempted suicide in his jail cell a week after being denied bail. Suicide watch generally entails extra supervision, medical assistance, and sometimes physical restraints; prison officials told the New York Times Epstein wasn’t on suicide watch at the time of his death.

According to NBC News, the sex offender was taken off of suicide watch a few days before his death. It is not clear why Epstein was found not to be at risk of dying by suicide; however, corrections officials usually require an incarcerated person to submit to an assessment before changing their suicide watch status.

Multiple officials have since expressed concern about that decision. Attorney General William Barr said Saturday he was “appalled” to hear Epstein was found dead while in federal custody.

As Barr mentioned, the FBI has also said it is investigating Epstein’s death.

Epstein was being held in a special housing unit (SHU) when he died. According to the Bureau of Prisons, this type of unit is intended to separate incarcerated people from others for health, safety, or disciplinary reasons. They may receive special supervision or health care while in the unit.

According to the department’s suicide prevention policy, incarcerated people in an SHU are to be monitored for signs of suicide risk. If they are found to be at risk, they are supposed to be referred to an official tasked with removing the person from the SHU in order to be placed on suicide watch. “Ordinarily, once the crisis is over, the inmate will be returned to the SHU to satisfy any sanction that was imposed,” the policy reads.

Once placed on suicide watch, at-risk incarcerated people are moved to a unit that allows easy and regular monitoring by guards or other designated “inmate observers,” according to the policy.

Those rooms are usually pretty bare. They’re often designed without protrusions, bunk handles, or sprinkler heads and inmates are stripped of anything that could easily be used to cause harm, according to reporting by Slate.

Robert Gangi, an expert on prisons and former executive director of the Correctional Association of New York, told the New York Times “it’s virtually impossible to kill yourself” while on suicide watch.

Other experts disagree, however, and argue it is unsurprising Epstein wasn’t being closely monitored after being removed from suicide watch.

Deborah Golden, an attorney at the Human Rights Defense Center, wrote on Twitter Saturday that Bureau of Prisons officials brought one of her clients back to a cell containing the instrument they used when attempting death by suicide. And lawyer Laura de las Casas referred to suicide watch as “absolute horse shit.”

Truth. I had a client taken to the hospital after he tried to slash his own neck with a razor. Came back. Blood still all over the cell and the razor was still there. https://t.co/xAC2qfdHQS

It’s not clear whether Epstein was removed at any point to be placed on suicide watch before returning to the SHU. The Metropolitan Correctional Center, where the financier was being held, did not immediately return requests for comment from Vox Saturday.

Much remains unknown about Epstein’s death, and lawmakers want clarity

Many questions remain around Epstein’s death and the days leading up to it; confusion was clear on social media, where users expressed outrage about the decision to remove the sex offender from suicide watch and where conspiracy theories swirled.

“We need answers. Lots of them,” Ocasio-Cortez wrote on Twitter.

“As a matter of public policy, the government has failed these girls yet again,” Sasse said of Epstein’s alleged victims.

Rep. Matt Gaetz (R-FL) called for a Congressional investigation of Epstein’s death; when asked if she supported Congress looking into the issue, Gillibrand said, “It should be reviewed.”

For now, that review will come in the form of investigations by the FBI and Department of Justice’s inspector general. Epstein himself remains under investigation as well.

CNN reports the Southern District of New York will continue its investigation into the allegations of sex trafficking Esptein faced at the time of his death, and he faces multiple civil suits as well, most of them filed by women who accused Epstein of sexually abusing them when they were underage girls.

5 things to know about Eugene Scalia, Trump’s new labor secretary with a famous dad
I’m an epidemiologist and a dad. Here’s why I think schools should reopen.
Everyone in the White House cluster who’s said they tested positive for the coronavirus
“Susan Collins consents”: The Wall Street Journal’s real, terrible Kavanaugh headline
How a study based on a typo made news everywhere — and the retraction didn’t
The murders of 9 Mormon family members spotlights Mexico’s spiraling violence