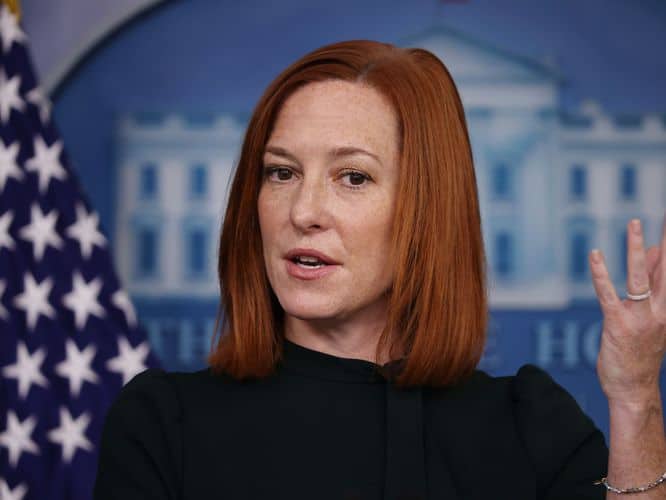 White House press secretary Jen Psaki’s dismissive comments about the Space Force earlier this week highlighted how thirsty conservatives are for outrage fuel. But it also illustrated a challenge the Biden administration faces as it tries to reckon with former President Donald Trump’s legacy.

Psaki was asked Tuesday by Bloomberg White House reporter Josh Wingrove if Biden has made a decision about “keeping, or keeping the scope of, Space Force.” Psaki responded as though she’d been asked about the happy hour specials at the Trump International Hotel.

“Wow, Space Force. It’s the plane of today,” Psaki sarcastically said, referring to silly questions she fielded during her first press briefings about Biden’s thoughts on the color scheme of Air Force One. “I am happy to check with our Space Force point of contact. I’m not sure who that is. I will find out and see if we have any update on that.”

It’s the plane of today” — Psaki dismisses a question about if Biden plans to keep the Space Force pic.twitter.com/cBrBj6hYUp

Trump administration press briefings were more akin to professional wrestling matches than they were good-faith attempts to share information with the American public. So as tame as it is compared to Sarah Sanders using a manipulated video to demean Jim Acosta or Sean Spicer declaring war on sense perception itself, Psaki’s exchange with Wingrove is about as controversial as Biden-era briefings have gotten thus far.

Psaki disrespected a Trump branding project, not the troops

On one hand, Psaki’s dismissiveness is understandable. As Defense News recently explained, the Space Force “is fundamentally a rebranding of the Air Force’s legacy space organizations — specifically the now-defunct Air Force Space Command.” Trump pushed for its establishment mainly as a marketing and fundraising opportunity for his campaign. Even before the Space Force was officially inaugurated in late 2019, the Trump campaign sold Space Force merchandise on its website, and administration officials were photographed wearing the swag.

Acting White House Chief of Staff Mick Mulvaney spotted under the wing of Air Force One in Florida, following a surprise trip with @realDonaldTrump to Afghanistan. pic.twitter.com/4ennHjKrEh

It was also a big hit at Trump rallies, where Trump touted it as evidence of how he was rebuilding the military while his fans chanted, “Space Force! Space Force!”

Space Force’s tacky, sci-fi-style branding — including referring to personnel as “Guardians” — has made it an object of ridicule among celebrities like Guardians of the Galaxy director James Gunn and Mark Hamill, who’s perhaps best known as Luke Skywalker in the Star Wars films.

So they grab the “Guardians” from your movies, they use the “Force” from our movies… then they have the gall to just steal their logo from “Star Trek”? Let’s file a 3-way joint lawsuit & really nail these larcenous bastards! ☄️ ️ #MayTheDorksBeWithYou https://t.co/AAbOexR4WY pic.twitter.com/0zIdLldcrB

But Space Force is more than just the Trump Steaks of the military. Though Trump pushed for its approval, it’s an independent branch of the armed forces that was created through congressional action. It has a budget of more than $15 billion that it uses to operate military and GPS satellites, track space debris, and plan for potential space military operations, among other things. That’s important work.

So, unsurprisingly, conservative pundits quickly seized on Psaki’s comments during Tuesday’s briefings, accusing her of disrespecting the troops (even though no “Guardians” have died in the line of duty).

conservatives pretending to be Very Upset that psaki Disrespected The Troops by brushing off a question about Space Force pic.twitter.com/gap3IVvuhS

Republican members of Congress also got in on the act. Rep. Mike Rogers (R-AL), the top Republican on the House Armed Services Committee, told Politico “it’s concerning to see the Biden administration’s press secretary blatantly diminish an entire branch of our military as the punchline of a joke, which I’m sure China would find funny,” and demanded Psaki “apologize to the men and women of the Space Force for this disgraceful comment.”

Rep. Lauren Boebert (R-CO), who encouraged the January 6 insurrection that led to the death of a police officer, shamelessly tweeted of Psaki’s comments, “The level of disrespect they have for those who serve is disgraceful.” A number of other elected Republicans weighed in with similar statements, and Fox News indulged in some performative outrage, too.

Amid all this, Psaki posted a tweet Tuesday evening that read as a bit of a Rorschach test. While she seemed to commit the Biden administration to the Space Force, she did so with a touch of shade, inviting “members of the team to come visit us in the briefing room anytime to share an update on their important work.”

We look forward to the continuing work of Space Force and invite the members of the team to come visit us in the briefing room anytime to share an update on their important work.

Vox reached out to the Space Force press office and asked if it plans to take Psaki up on her offer, but hadn’t received a response as of publish time. Meanwhile, on Wednesday, Psaki clarified in response to a question from a Fox News reporter that Space Force “has the full support of the Biden administration.” She hasn’t caved to demands that she apologize for her remarks.

Just over two weeks into Biden’s presidency, the new president has been focused on priorities like passing a massive Covid-19 relief bill, recommitting the US to its global alliances, and trying to protect the environment by halting oil and gas drilling on public lands. One gets the sense from Psaki’s comments that the administration hadn’t spent much, if any, time thinking about the Space Force. That’s understandable, given the scope of the crises facing the country.

That said, Wingrove’s question was legitimate, and Psaki ultimately did the Biden administration no favors by providing Republicans with an easy opening to make attacks — even if many of them do have an Obama-wearing-a-tan-suit quality.

And, ultimately, Biden has little choice but to learn to live with the Space Force. Disbanding it would take an act of Congress, and Biden has made it clear that he intends to spend his political capital on more pressing things.

Baby Yoda: The Mandalorian’s adorable alien costar, explained
How to get the most out of your exercise time, according to science
5 winners and 2 losers from night 3 of the Democratic convention
The Trump administration has started sending Brazilian asylum seekers back to Mexico
The bare minimum America could do to expand health coverage
A deceptively edited video of Joe Biden illustrates a big problem in 2020