Jerry Falwell Jr., and the allegations against him, explained 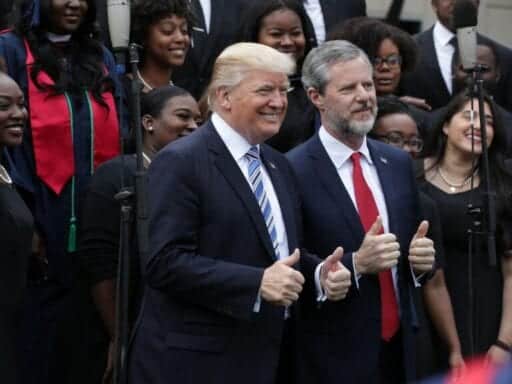 Share
Loading...
President Donald Trump and Jerry Falwell (right), president of Liberty University, with members of gospel choir Lu Praise during a commencement at Liberty on May 13, 2017, in Lynchburg, Virginia. | Alex Wong/Getty Images

Why one of the best-known American evangelicals is facing big-time scrutiny.

Jerry Falwell Jr. — president of Liberty University (one of the world’s largest Christian universities) and a prominent supporter of President Trump — has made headlines many times before. Most recently, however, the headlines have focused on a slow-moving series of scandals that threaten to bring down, or at least sully the reputation of, one of evangelical Christianity’s most famous families.

Earlier this week, Politico published a story connecting him and his wife Becki Falwell to a host of questionable real estate deals; possible self-dealing efforts to financially benefit members of the Falwell family; online poll manipulation; and visits to Miami nightclubs. (Liberty University forbids students from attending dances.) According to employees of the University, Falwell Jr. runs a “dictatorship” at Liberty, but said that speaking out about his conduct was necessary.

Falwell’s concerning behavior reportedly also includes his communications with students. As detailed by Reuters this week, Falwell described students at Liberty as “physically retarded” and “social misfits” in emails, the latter stemming from concern from students who wanted to work out at a Liberty-owned off-campus gym (which Falwell wanted to be kept private for Liberty executive use only).

But even before the revelations regarding financial mismanagement and bad behavior, there was a steady drip of half-veiled stories of other real estate deals the couple had made, including a business relationship with a former hotel pool attendant (whom Falwell and his wife took on trips) and investments in a South Beach hostel that advertised racy parties and listed its rules as being “No Soliciting, Fundraising, Politics, Salesmen, Religion.”

I reached out to Liberty University’s senior vice president of university communications, Scott Lamb, but have not yet received a response.

There are few names more well known both inside and outside the world of American mainline evangelical Christianity than that of the late Rev. Jerry Falwell and his son, Jerry Falwell Jr. The former, a Southern Baptist pastor by training, created a Christian media empire and a political lobbying powerhouse — the Moral Majority — while also founding a megachurch and Liberty University, which now has a multi-billion dollar endowment and more than 100,000 students (thanks in part to the school’s robust online offerings — the majority of students attend classes online).

The latter, on the other hand, has focused more on growing the reach and power of Liberty University (and correspondingly, his power over the students of Liberty University), and on his relationships with Donald Trump and members of the Trump Administration — from inviting Trump to speak at Liberty in 2012 to giving a speech at the 2016 Republican National Convention (where he called Trump a “blue-collar billionaire”) to voicing his continued support for Trump after the infamous “grab ’em by the pussy” tape to telling the Washington Post that there is nothing Trump could do that would endanger his support from evangelical leaders.

But Falwell Jr. isn’t an evangelical leader, and his support for Trump is purportedly based on the president’s “business acumen,” not his relationship with Jesus Christ. And it’s his behavior with his own business — running Liberty University and attempting to assist the Trump campaign — that is drawing significant (and unwelcome) attention.

It’s important to remember that despite being often described as a Christian leader, Jerry Falwell Jr. never became a pastor — a fact he’s not shy about sharing even while leading one of the largest Christian universities in the world. According to the agreement made with his father, upon the Rev. Jerry Falwell’s death in 2007, Falwell Jr. took the helm of Liberty University while his brother, Jonathan, took over the church their father helped to found in 1956, Thomas Road Baptist Church.

You’re putting your ignorance on display. I have never been a minister. UVA-trained lawyer and commercial real estate developer for 20 yrs. Univ president for last 12 years-student body tripled to 100000+/endowment from 0 to $2 billion and $1.6B new construction in those 12 years

Falwell is also not shy about his fundraising efforts for the university, or his role within the world of what I’d call “political evangelicalism” — the effort to combine evangelical Christianity with bare-knuckle politics in order to get evangelical priorities into law and evangelical politicians (or politicians willing to accede to evangelical interests) into office.

(Without taking up too much space, evangelical Christianity is a strain of Protestantism that emphasizes a personal relationship with God, active efforts to share Christianity with others, the primacy of the Bible in teaching about Christianity, and the importance of a conversion experience, often called being “born again.” America has the highest concentration of evangelical Christians of any country on Earth.)

But to understand Falwell’s role in the world of political evangelicalism, it’s important to start out with the person who gave him both his famous name and his career: His father, whose controversial and contradictory personality colored not just how his family was perceived within and without the evangelical movement, but how evangelicalism was and is viewed in America.

When the elder Falwell died in 2007, National Review described him as someone who once responded to the civil rights movement by saying, “Preachers are not called to be politicians, but to be soul winners” — but then created the Moral Majority, an incredibly powerful political action group that helped buoy Ronald Reagan into the White House.

The Moral Majority was part of the rise of the religious right in the late 1970s and early 1980s, which formed, according to conservative activist Paul Weyrich, in response to the federal government rescinding the tax-exempt status of Bob Jones University because of the school’s policy against interracial dating.

Falwell was a partisan — a staunch Republican — who nevertheless lambasted the party for its failure to push aggressively for his conservative agenda. He was a patriot — he believed that America was “founded as a Christian nation” — yet suspected that the nation’s cultural decline (brought on, in his view, by abortionists, pagans, gays, and feminists) had caused the 9/11 attacks. “Living by God’s principles promotes a nation to greatness,” he said, “violating those principles brings a nation to shame.”

Falwell’s contradictions continue to define too much of conservative Christianity in America. The assumption that America lays claim to a “covenant” relationship with God, the confusion of the gospel of Christ with a party platform, the narrow definition of a “moral agenda” in American politics — all were among the unseemly aspects of Falwell’s activism that survive his death.

But while Falwell carried serious weight with evangelical Christians, his eldest son does not. Erick Erickson, a conservative pundit and an evangelical, told me that Falwell Jr.’s role in conservative politics has been overstated.

He added, “If he were named Jerry Smith Jr. no one would care what he thinks.”

But because his last name is Falwell, his views — specifically on Donald Trump — have carried significant weight, particularly among Trump-supportive social conservatives. And Trump has allegedly reciprocated — because of his support for Trump during the 2016 presidential campaign, Falwell Jr. said that he was offered the role of secretary of education.

The allegations against Falwell Jr.

But the misdeeds allegedly committed by Falwell Jr. and his wife have little to do with Donald Trump. Instead, they are centered on censorship on campus, and more recently, sketchy practices that Liberty insiders think are taking place to help the Falwell family and their friends (including their personal trainer) make money or benefit their reputation.

This includes everything from the University making loans to friends of the Falwells, to Falwell Jr. having a “fixer” of sorts who worked for the University defend him in the comments section of a critical article. More seriously, there’s the example of the LaQuinta Inn near Liberty’s campus: It is owned by Chris Doyle, who manages the university’s real estate, and Falwell Jr.’s son, Trey, is purportedly a silent partner in the management company that runs the hotel. As Politico detailed:

Emails obtained for this article show that on at least one occasion, university employees were asked to promote the LaQuinta on the school’s website—what several current and former high-ranking Liberty officials and employees described as part of a process where the school “funnels business” to the hotel.

And then there’s that fixer, John Gauger. He wasn’t just a fixer for Falwell Jr. — he was the school’s Chief Information Office and also ran RedFinch LLC, an online business which Liberty paid more than $120,000 in 2016 to recruit students online. Gauger also had a relationship with Michael Cohen, Trump’s former personal attorney.

In January, the Wall Street Journal reported that in 2014 and 2015, Michael Cohen hired Gauger’s side business, RedFinch LLC, to rig online polls in Donald Trump’s favor while he considered a run for the presidency. Gauger’s work consisted of writing a computer script to repeatedly vote for Trump in two online polls; his company would get paid $50,000 in return. Instead, Gauger told the Journal that after a meeting at Trump Tower in Manhattan, Cohen paid Gauger roughly one-fourth of that amount—between $12,000 and $13,000 in cash—and gave him a boxing glove worn by a mixed martial arts fighter.

Also on that trip: Trey, Falwell Jr.’s son, who posted a picture on Instagram of a large sum of cash spread across a hotel bed.

Michael Cohen may have been helpful to Falwell Jr. in other ways, allegedly aiding Falwell in keeping risque photographs of his wife, Becki, private.

Longtime Liberty officials close to Falwell told me the university president has shown or texted his male confidants—including at least one employee who worked for him at Liberty—photos of his wife in provocative and sexual poses.

And based on emails obtained by Reuters, Falwell took a jaundiced view of members of his own staff and students attending his university, describing a student as “emotionally unbalanced and physically retarded” and the school’s then-police chief as “a half-wit and easy to manipulate.”

For his part, Falwell has demanded the FBI investigate how his emails wound up in the hands of journalists, describing the forwarding of emails to journalists as “theft” and saying that he was the victim of a smear campaign because of his support for Trump. But several conservatives are demanding answers, including calling for Falwell to step down from his post.

Falwell isn’t an evangelical leader. He’s not even a good university president. He’s a shoddy example of what it means to be an educator, and more important, what it means to be a Christian: a faithful Christian dedicated not to personal gain, but to a life of faith that will inevitably require sacrifice and humility. Falwell is a fraud. And the university would be better off without him.

And students at Liberty are also taking action, with some protesting against Falwell on campus on Friday.

Liberty students will be protesting Falwell at 11:45 AM tomorrow after convocation. Montview stairs. pic.twitter.com/DWncW3KIoE

Jerry Falwell Jr. was the beneficiary of a family legacy built on the promise of sharing the Christian faith that was of such vital importance to his father — a legacy which he appears to have used to benefit himself and his family, to the detriment of students attending the university that was his father’s life’s work. Though it remains to be seen whether or not the recent cavalcade of scandals will have any impact on either Falwell’s role at Liberty or within the Trump-supporter ecosystem, it has already had a devastating one — on his reputation as a leader of Christians.