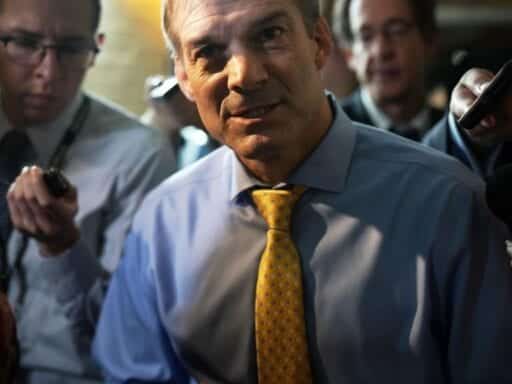 “Look, the timing makes you wonder,” Jordan, a top conservative in the House, said of the accusations.

Rep. Jim Jordan, one of the most powerful conservatives in the House, has been accused by at least four men of turning a blind eye to the sexual abuse of possibly more than 1,000 athletes and students, when he was the assistant coach of the wrestling team at Ohio State from 1986 to 1994.

Jordan’s response: deny the allegations and raise questions about his accusers’ intents.

“Look, the timing makes you wonder,” Jordan told CNN at a July 4 event. “All I know is, it’s not true. … It’s interesting that the timing is what it is, in light of things that are going on in Washington.”

The conservative outlet the Daily Caller published an article questioning the credibility of the wrestlers cited in an NBC report, reporting on their “sketchy history.” Conservatives like Rep. Matt Gaetz (R-FL) and House Freedom Caucus spokesperson Darin Miller, who used to work in Jordan’s office, shared the article on Twitter.

Jordan’s allies are circling around him as he prepares to possibly make a run to replace Speaker of the House Paul Ryan, who is stepping down after elections this November. Jordan is a powerful member of Republican conference and trusted by the party’s most conservative members.

The investigation into the Ohio State scandal is still under way. But the early defense of Jordan suggests a reflexive urge for members of his party to back one of their own. Democrats were in that situation last fall, when many rallied around Al Franken as allegations of sexual misconduct against him emerged. Even now, after Franken stepped down, some Democrats feel it was wrong to turn on him. It’s part of the big unanswered question in the era of #MeToo: What should happen to those accused of being involved in sexual abuse and harassment cases? Neither party has set a standard.

Jordan denies he knew anything about the abuse. “I never knew about any type of abuse,” he told Politico. “If I did, I would have done something about it. And look, if there are people who are abused, then that’s terrible and we want justice to happen.”

The university has been conducting an investigation into Dr. Richard Strauss, who died in 2005, for repeated reports of sexual assault and rape. One Ohio State wrestler said he estimates Strauss sexually assaulted or raped at least 1,500 — and possibly up to 2,000 — athletes at Ohio State between 1978 through 1998, based on student testimony.

There’s an ongoing public reckoning over the all-too-often unaddressed prevalence of sexual assault in every sphere, from college campuses to Hollywood to the halls government. Just earlier this year, Larry Nassar, a team doctor for the US’s gymnastics team, was sentenced to 175 years of jail time for sexually assaulting hundreds of young athletes — allegations that had been made, and silenced, for years.

Jordan has repeatedly denied knowing anything about Strauss’s conduct. But several of Jordan’s former athletes told NBC that his denial doesn’t add up:

Three former wrestlers told NBC News that it was common knowledge that Strauss showered regularly with the students and inappropriately touched them during appointments, and said it would have been impossible for Jordan to be unaware; one wrestler said he told Jordan directly about the abuse.

On Thursday, a fourth former wrestler, Shawn Dailey, who called himself a “close friend” of Jordan’s — and contributed to Jordan’s political campaign in 1994 — said Jordan did know about the abuse, noting that the Ohio lawmaker engaged in locker room talk about the team doctor.

Dailey said he had been groped by Strauss but was too embarrassed to report it to Jordan. He corroborated an account from Dunyasha Yetts, a wrestler at Ohio State in 1993, who said he told Jordan that he went to Strauss for a thumb injury and instead had his pants pulled down.

“For God’s sake, Strauss’s locker was right next to Jordan’s, and Jordan even said he’d kill him if he tried anything with [Jordan],” Yetts told NBC — a conversation Dailey said he remembered.

Another former wrestler, Mark DiSabato, whose decision to go public with his allegations against Strauss prompted the university’s investigation, said Jordan told him to “please leave me out of it” and “not to get him involved” when he contacted the lawmaker about going forward with the reports.

“I considered Jim Jordan a friend,” DiSabato, who says he was groped by Strauss dozens of times, told NBC. “But at the end of the day, he is absolutely lying if he says he doesn’t know what was going on.”

DiSabato made a video documenting his allegations, which he sent to Ohio State in June, that included a recording of the wrestling team’s former head coach Russ Hellickson — Jordan’s mentor — saying he told school administrators about Strauss.

Another wrestler, who was cited anonymously in the original NBC report, added that it was common knowledge that Strauss behaved inappropriately with athletes — showering with them despite not doing the workouts, and “examining” their testicles regardless of their stated injuries.

“I never saw Doc Strauss over a nine-year time frame (including DiSabato’s time as a graduate student) where he didn’t ask me to — where I went to see him for medicine or whatever, finger injury, shoulder, knee — where he did not want to examine my testicles,” DiSabato told CNN. “He groped. Every time.”

Jordan’s office maintains ignorance and has said that they were not contacted by the university during the investigation.

“He has not been contacted by investigators about the matter but will assist them in any way they ask, because if what is alleged is true, the victims deserve a full investigation and justice,” Jordan’s office said in a statement.

However, NBC reported that the Dayton, Ohio law firm that was appointed as Ohio State’s legal counsel said their investigators “had previously contacted Rep. Jordan’s office by email and phone to request that he participate in an interview.”

”To date, Rep. Jordan has not responded to those requests,” Kathleen Trafford, of the law firm, said in a statement, adding that their investigative team is still trying to schedule an interview with Jordan.

“Jimmy’s a good guy,” Dailey told NBC. “But to say that he had no knowledge of it, I would say that’s kind of hurtful.”

Jordan hasn’t just denied knowing about the abuse. The conservative Freedom Caucus founder, who wields a lot of power in the House, also tried to sow doubt about the intentions of his accusers, questioning the timing of the report in an interview at an Ohio July 4 event.

Jordan has made a name for himself in Washington as one of the House’s most vocal FBI and Department of Justice skeptics, echoing Trump in calling out the Russia investigations as a “witch hunt.” He has also floated running for House speaker, in light of Paul Ryan’s coming retirement. As one of the leaders in the Freedom Caucus, his group of ultra-conservative lawmakers wield a lot of power in the Trump-era of Republican politics.

Ryan’s office has called the allegations “serious,” but hasn’t indicated if he will take any further action.

“The university has rightfully initiated a full investigation into the matter. The speaker will await the findings of that inquiry,” Ryan’s spokesperson Doug Andres said.

But Jordan has found support in his conservative circles. On Thursday, fellow Republican lawmakers and congressional aides released statements in support of Jordan. House Freedom Caucus chair Rep. Mark Meadows told the Washington Examiner that the allegations are “not true,” and that he expects the university to fully exonerate Jordan.

Two former Ohio State University wrestlers accusing Ohio Rep. Jim Jordan of ignoring sexual misconduct by a university physician more than two decades ago have a history of failed business dealings, lawsuits, harassment allegations, and in the case of one accuser, an 18 month prison sentence for fraud.

One of the former wrestlers, Mike DiSabato, is also being accused by the widow of a Marine who was killed in combat in Iraq of intimidating and bullying her over a memorial fund set up in her husband’s name.

Jordan’s congressional office also released a statement from the former head coach, Hellickson, the Daily Caller reported, which read, “Neither Jim nor I would sidestep or avoid challenges for our wrestlers just because the circumstances were painful or uncomfortable — in fact, those are the kind of circumstances that motivated Jim the most.”

Jordan maintains he will cooperate with the university’s investigation. On Thursday, Jordan’s office reported emails from the the former wrestler to Capitol Police, alleging the lawmaker was being bullied.

The university is investigating testimony of widespread sexual abuse

Ohio State began investigating Strauss, who died by suicide in 2005, earlier this year, after DiSabato reported the allegations to the university.

Strauss, who was the university’s team doctor from 1981 to 1995, after joining Ohio State’s staff in 1978, was said to have been in contact with athletes in baseball, cheerleading, cross country, fencing, football, gymnastics, ice hockey, lacrosse, soccer, swimming, tennis, track, volleyball, and wrestling, during his time.

The university has said it has received testimony of sexual abuse and misconduct from male students from the 14 different sports teams, and some students who were patients through the university’s health services unit. Investigators have asked 150 people questions about the allegations, from students to witnesses, and the university has also referred the matter to law enforcement for any criminal prosecution.

Ohio State has yet to make any details of the investigation public, but DiSabato told NBC, “based on testimony from victim athletes from each of the aforementioned varsity sports, we estimate that Strauss sexually assaulted and/or raped a minimum of 1,500/2,000 athletes at OSU from 1978 through 1998.”

According to a report from the Associated Press, Strauss worked at five other universities, including Harvard and Rutgers.

As sexual harassment awareness grows as a national flashpoint, the investigation into Strauss and allegations of Jordan’s inaction highlight what has been a growing conversation around bystanders. It comes just months after an investigation into USA Gymnastics’ former team doctor Larry Nassar, whose abuse and sexual misconduct went silenced for years.

As reports grow, there has been increased attention turned toward Congress, where the striking power imbalance between low-paid employees and the nation’s most powerful politicians all too often allows for unfettered corruption and misconduct. The outcome of this university’s investigation could impact Jordan’s position as a prominent conservative leader in the House.