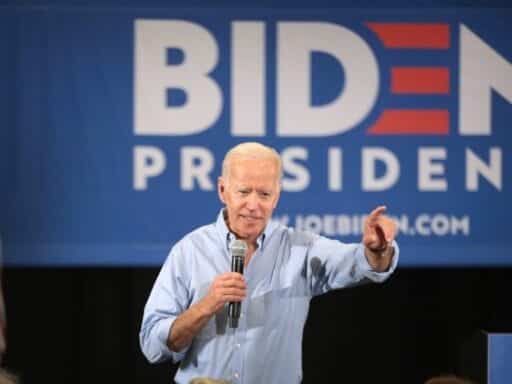 President Donald Trump made one thing clear during his Tuesday reelection announcement: There will be no reset from 2016. Former Vice President Joe Biden and Sen. Bernie Sanders — the top two Democrats running against him — have wildly different ideas about how to combat that.

Speaking in Orlando, Florida, Trump spent the bulk of the official kick-off to his 2020 campaign not on touting his accomplishments as president, but instead laying out the battle lines for a campaign that will be a vicious fight against his enemies.

“Our radical Democrat opponents are driven by hatred, prejudice, and rage and want to destroy you, and they want to destroy our country as we know it,” Trump said early on in his nearly 90-minute speech. “Not acceptable!”

Even with 24 Democrats running for the party’s nomination to face off against Trump, the president gave few signals about which Democrat he sees as his main challenger. He mentioned 2016 nominee Hillary Clinton far more than any of the current candidates, and only made passing mentions to two of the current Democratic frontrunners Biden Sanders.

Or “sleepy Joe,” and “crazy Bernie,” as Trump called them (the president made no mention of Democratic Sen. Elizabeth Warren, who is currently polling with them in the top three).

The president’s first official campaign rally presented Democrats with a conundrum: Do they present Trump as an anomaly and themselves as simply the return to normalcy? Or do they offer a bold, left-leaning vision of America to rival the one Trump has created?

On Tuesday night, Biden and Sanders each offered a distinct, divergent answer to that question.

Democratic frontrunner and former Vice President Joe Biden has been clear: He thinks Trump is a political aberration, a sickness that America can recover from.

From his campaign launch, Biden’s main theme has been returning the country to pre-Trump normalcy. His message ahead of Trump’s reelection speech was no different.

“We can make Trump an aberration or let him fundamentally and forever alter the character of this nation,” Biden’s campaign said in the statement. “Joe Biden is running for president to restore the soul of this nation, to deliver profound changes for the sake of future generations, to rebuild the American middle class — with everyone in on the deal this time — and to ensure that government has people’s backs.”

It’s worth pointing out this line from Biden has drawn plenty of scorn from liberal politicos (including some former Obama administration officials), who say Trump is a symptom of a much larger political crisis, rather than an anomaly. Others have criticized Biden for not having enough bold ideas of his own to counter Trump’s policies, compared to not just to Sanders, but also the policy-heavy candidacy of fellow progressive Warren, or the idealism of a young candidate like South Bend, Indiana, Mayor Pete Buttigieg.

But Biden’s message is clearly resonating with voters who are sick of Trump, including many black voters who want to see Trump gone (also a group the vice president is so far doing very well with). He’s been the consistent frontrunner in national and state-level polls — since before he even officially declared his candidacy.

Sanders — the purveyor of political revolution — offered another way to beat Trump in a response that was live-streamed shortly after the president’s speech. Sanders stuck to his core message that Americans want a much deeper transformation of the nation, including reducing economic inequality, and providing health care for all.

Sanders recently laid his vision out in full (for the second time) in a speech about democratic socialism. He is advocating massive political mobilizing to “take up the unfinished business of the New Deal and carry it to completion.”

“We must recognize that in the 21st century, in the wealthiest country in the history of the world, economic rights are human rights,” Sanders said in that speech. “That is what I mean by democratic socialism.”

Biden’s vision is to return things to the old “normal” — the normal before Trump. Sanders’s vision involves much bolder and systemic political and policy change.

Of course, with many more candidates running, there are plenty of other ideas out there, but Biden’s and Sanders’s views represent the main two theories of how to win in 2020.

The next year will help determine who is right.

Will Biden’s $15 minimum wage cost jobs? The evidence, explained.
What we learned from the opening statements at Paul Manafort’s trial
Here are the few Republicans who have called for Trump’s removal
Trump loves dictators. Erdogan is the latest to take advantage of that.
6 months of Trump’s excuses for not doing an interview with Mueller: a timeline
How McKinsey infiltrated the world of global public health